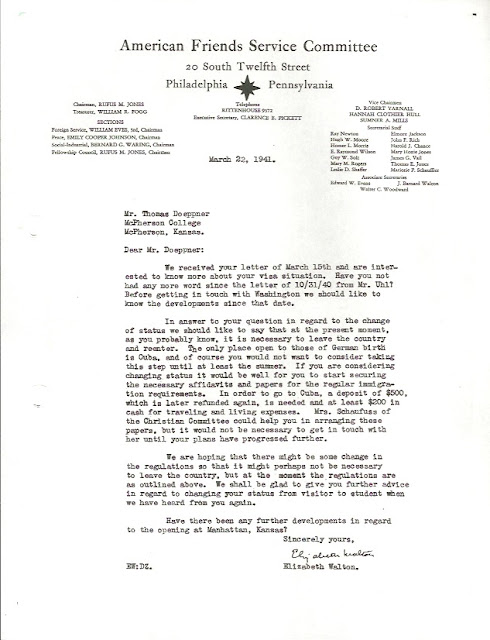 Letter from Elizabeth Walton of AFSC to Opa

We received your letter of March 15th and are interested to know more about your visa situation. Have you not had any more word since the letter of 10/30/40 from Mr. Uhl? Before getting in touch with Washington we should like to know the developments since that date.

In answer to your question in regard to the change of status we should like to say that at the present moment, as you probably know, it is necessary to leave the country and reenter. The only place open to those of German birth is Cuba, and of course you would not want to consider taking this step until at least the summer. If you are considering changing status it would be well for you to start securing the necessary affidavits and papers for the regular immigration requirements. In order to go to Cuba, a deposit of $500, which is later refunded again, is needed and at least $200 in cash for traveling and living expenses. Mrs. Schaufuss of the Christian Committee could help you in arranging these papers, but it would not be necessary to get in touch with her until your plans have progressed further.

We are hoping that there might be some change in the regulations so that it might perhaps not be necessary to leave the country, but at the moment the regulations are as outlined above. We shall be glad to give you further advice in regard to changing your status from visitor to student when we have heard from you again.

Have there been any further developments in regard to the opening at Manhattan, Kansas? 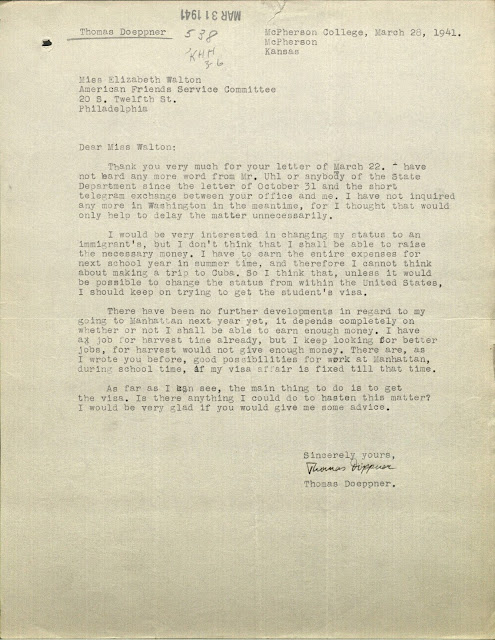 Letter from Opa to Elizabeth Walton of AFSC

Thank you very much for your letter of March 22. I have not heard any more word from Mr. Uhl or anybody of the State Department since the letter of October 31 and the short telegram exchange between your office and me.  have not inquired any more in Washington in the meantime, for I thought that would only help to delay the matter unnecessarily.

I would be very interested in changing my status to an immigrant's, but I don't think that I shall be able to raise the necessary money. I have to earn the entire expenses for next school year in summer time, and therefore I cannot think about making a trip to Cuba. So I think that, unless it would be possible to change the status from within the United States, I should keep on trying to get the student's visa.

There have been no further developments in regard to my going to Manhattan next year yet, it depends completely on whether or not I shall be able to earn enough money. I have a job for harvest time already, but I keep looking for better jobs, for harvest would not give enough money. There are, as I wrote you before, good possibilities for work in Manhattan, during school time, if my visa affair is fixed till that time.

As far as I can see, the main thing to do is to get the visa. Is there anything I could do to hasten this matter? I would b very glad if you could give me some advice.

Right now I'm cursing that jerk at Ellis Island who gave Opa a visitor's visa when he should have been given a student visa. This whole mess would not be happening otherwise. I know that it was likely more complicated than that - but something happened in the process that changed Opa's student visa to a visitor's visa, and it really stinks here. I feel so sorry for Opa- he has got to be stressed to the max. So many things are up in the air, and so many things hang on to whether or not he has the right visa.

I don't usually do bullet points in my blog, but I'm going to list the things Opa is worried about right now that has something to do with his visa:

The State Department could at any moment sweep down and grab Opa and ship him out. His visitor's visa has expired and he is currently living illegally in the United States. He has tried to change his visa to a student visa (the one he should have had in the first place) and has had no definitive response. The visitor's visa means that you are only visiting the United States, and so after a time you must leave. A loophole for people is to leave after their "visit" and then come back, but Opa cannot afford this loophole. To become an official immigrant (meaning seeking citizenship in this case), you have a completely separate and equally arduous process that requires a lot of money and a lot of time. Neither of those things are commodities that Opa is rich in. That's why he has been after the Student Visa all along, which allows him to stay in the United States as long as he is a student (I'm sure with some qualifications, but at least less temporary than the visitor's visa). He just wants to be able to get a job and finish his studies, oh and stay away from Hitler and get his mom to safety.

Elizabeth Walton at the AFSC is talking about what Opa must do to satisfy the conditions of his visitors visa (go to Cuba) but she is incredulous that nothing has transpired since the October letters from Mr. Uhl with the INS. Opa has pretty much had to confirm and reconfirm that no, really, the State Department seems to have totally dropped the ball. And if I were Opa and I were living illegally and hadn't heard from the  State Department who thinks I should leave the country, yeah, I probably wouldn't be writing them a thousand letters reminding them of my illegal status.

If you want to remind yourself of what the last bit of communication was with Opa and the visa folks, here's a quick glance with links to the full blogs:

October 25- visa extension denied
October 30- conversation about the denial, and why Opa has nowhere to go
October 31- Mr. Uhl unhelpfully telling Opa to get the Student Visa that he's been trying to get all along.
November 1- Oops- you had two files, that's why we didn't see your application for Student Visa in time- sit tight- we'll let you know what do to.

And that was the last he heard from them. To Opa's credit- they told him not to do anything until they dealt with the two-file discrepancy.

But now Opa knows that he has to deal with it, and he's afraid of what will happen. That's why he wants the AFSC at his side, and it seems like they are just as confused as he is. Which is not comforting. And Opa certainly is not going to Cuba! At least we hope not.
Posted by Sarah Snow at Wednesday, September 28, 2016