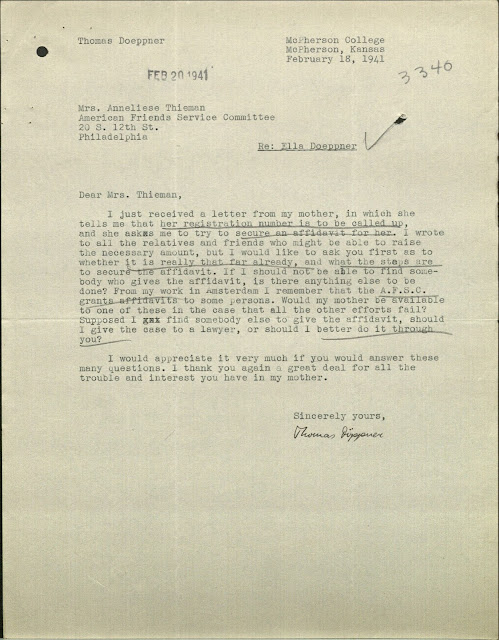 I just received a letter from my mother, in which she tells me that her registration number is to be called up, and she asks me to try to secure an affidavit for her. I wrote to all the relatives and friends who might be able to raise the necessary amount, but I would like to ask you first as to whether it is really that far already, and what the steps are to secure the affidavit. If I should not be able to find somebody who gives the affidavit, is there anything else to be done? From my work in Amsterdam I remember that the AFSC grants affidavits to some persons. Would my mother be available to one of these in the case that all the other efforts fail? Supposed I find somebody else to give the affidavit, should I give the case to a lawyer, or should I better do it through you?

I would appreciate it very much if you would answer these many questions. I thank you again a great deal for all the trouble and interest you have in my mother.

This letter reminds me of how lucky we are to have the  AFSC case files. We only see from Ella's letters what her desperate attempts are to leave Germany, and her requests for help from Opa. With the AFSC case files, we have seen how Opa responded to her requests. Opa heeds his mother's wishes and asks every friend and family member if they are willing to put forth an affidavit (a financial promise to the government to be responsible for the immigrant).

Opa wisely writes to the AFSC to see if it sounds right that Ella's quota number could already be up. It's been a while since Ella has gotten her number, but I'll refresh your memory on it. (Also here's a blog that might be helpful to review.) The quota number is simply the place in line that Ella holds for a potential immigration visa to the United States. Ella's number was 76 204a. I think that would read as 76,204 in line. That's a lot of people in front of Ella, it's also over the amount allowed into the United States per year. I might be mistaken on the specifics of how that number turned out, but the estimate wait time for Ella was about 3-5 years optimistically. She got the number in 1939, so it's been about two years, and a lot has changed since then. For one thing- Germany invaded other countries, so there are now even more folks trying to get away, and people are less and less excited about welcoming Germans into their midst.  Also the 5th column conspiracy is fresh in everyone's minds.

Now the numbers are sort of arbitrary. We have to remember that not everyone who got a number was able to go to the United States. Some wouldn't have qualified financially or otherwise- so they would be skipped. Some may have immigrated to another country instead when the American route proved too long or troublesome. Some may have died. There are many ways that those numbers could have been run through. So it isn't completely wild to imagine that just perhaps Ella's turn really was up.

Opa is cautiously hopeful. He asks what can be done to help if it was really time. He really advocates for his Mom, and I'm so glad we see this. He asks if she would be eligible for the affidavits that the AFSC awards sometimes. I thought it was interesting that he somehow knew about this from his work in Amsterdam. Did he work for the Quakers? We don't know a whole lot about what he did in Amsterdam. I'll ask Gisela, his Berlin Quaker friend, and see if she remembers. (This is why I need to go back to Berlin! More questions!) Ella would be so proud and honored that he worked so hard to help her. Did she know what he did?

Opa holds out hope for his mother, even though he has consistently gotten bad news on her quest to leave Germany. He's ready to put in the work when the time arrives. I'm so grateful for the AFSC as a resource for him. How lost some folks must have been in the immigration process!