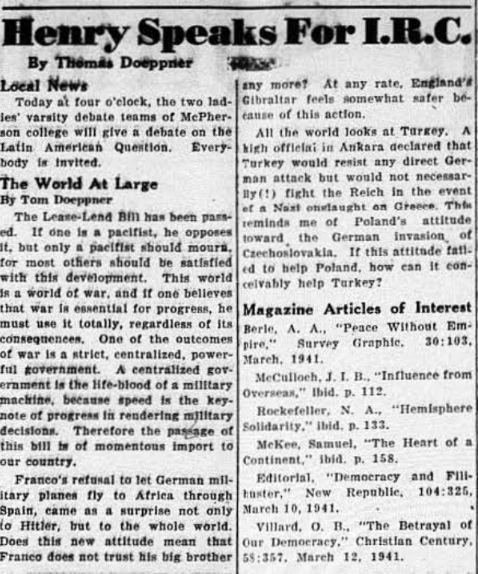 Today at four o'clock, the two ladies' varsity debate teams of McPherson college will give a debate on the Latin American Question. Everybody is invited.

The World At Large
By Tom Doeppner

The Lease-Lend Bill has been passed. If one is a pacifist, he opposes it, but only a pacifist should mourn, for most others should be satisfied with this development. This world is a world of war, and if one believes that war is essential for progress, he must use it totally, regardless of its consequences. One of the outcomes of war is a strict, centralized, powerful government. A centralized government is the life-blood of a military machine, because speed is the key-note of progress in rendering military decisions. Therefore the passage of this bill is of momentous import to our country.

Franco's refusal to let German military planes fly to Africa through Spain, came as a surprise not only to Hitler, but to the whole world. Does this new attitude mean that Franco does not trust his big brother any more? At any rate, England's Gibraltar feels somewhat safer because of this action.

All the world looks at Turkey. A high official in Ankara declared that Turkey would resist any direct German attack but would not necessarily(!) fight the Reich in the event of a Nazi onslaught on Greece. This reminds me of Poland's attitude toward the German invasion of Czechoslovakia. If this attitude failed to help Poland, how can it conceivably help Turkey?

Opa speaks some strong words. I actually find it hard to discern if he is for or against the Lease-Lend bill. He seems to divide the argument in two- that the only reason to be upset about it is to be a pacifist, otherwise if you are for war- you should be for it all the way. It's sort of a slight against folks who want to meet somewhere in the middle. He's essentially saying: you can't do that. If you're for war- you have to do it and do it right- all the way. If you're a pacifist- then you are against this. Period.

I imagine Opa finds himself thinking about this more than the average person. His mother, a jewish woman in the heart of Berlin, could use a weakened Hitler right now. His friends and soul-partners in adolescence - and the way he got to the United States- they are Quakers and Pacifists. Where does his heart and mind settle?

I also find that little tidbit about Spain not allowing their airspace to Nazis interesting. I wrote about this a while ago, but the Nazis helped Franco win the Spanish civil war. This civil war was between Franco (a nationalist or how we call the German Nationalists: Nazi) and the democratically elected powers in Spain. Pablo Picasso's famous Guernica mural depicts the chaos and carnage following the Nazi-aided attack/bombing of civilians in the Spanish town of Guernica. So Franco was indebted to Hitler... and didn't seem to care. This is a shock! History lesson: Franco ruled from 1939 until his death in 1975. That's a long dictatorship.
Posted by Sarah Snow at Monday, September 26, 2016