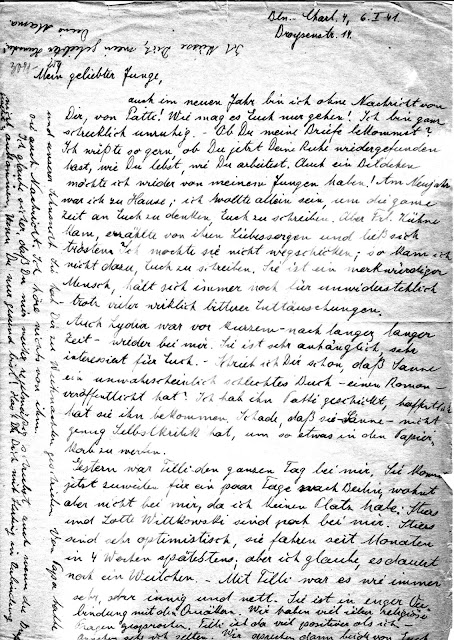 Also in this new year, I am without news from you, from Patti! I wonder how you are! I am so terribly restless (nervous, worried).  Have you received my letters? I would love to know, if you have found your peace again, how you live and how you work. Also would love another picture of my boy! New Year’s day I spent at home, I wanted to be alone, to be able to think of both of you, and write to both of you. But Miss Kuehne came by, talked about her love problems, and needed comfort. I did not want to send her away, so I did not get to write to you. She is a strange human being, still believes herself to be irresistible, even after many bitter disappointments. Also Lydia came by, after a long, long time. She is very attached, very interested in both of you. Did I write to you that Saune published an incredibly bad book, a novel? I sent it to Patti, hopefully she received it. Too bad, that Saune does not have enough self criticism to throw it into the wastepaper basket.

Yesterday Tillie was here for the whole day. She now comes to Berlin for a few days sometimes, but does not stay with me, because I don't have the space. Stiers and Lotte Wittkowsky are still with me. Stiers are very optimistic, but for months now, they are to leave in 4 weeks or less, but I believe it will take a while longer. As usual, being with Tillie was very nice and heartfelt. She stays in close contact with the Quakers. We discussed many religious questions. Tillie's  thinking is much more positive than mine. Ann'chen I see very seldom, but we speak of you two a lot, and our longings. She wrote to you for Christmas.

She also had news from Papa. I don't hear from him. I do believe, that you are writing to me regularly, even if the letters do not arrive. If only you are well. Did you contact Herting?

I kiss my beloved Hunschenboy

Parts of this letter made me laugh out loud! Ella must have made a New Year's resolution to be honest - or at least not to hold back. She wanted to be alone on New Years, as she often does on holidays without her children. Instead, a friend came by with a sad love story and needed comfort. This phrase is about as Berliner as you can get: "She is a strange human being, still believes herself to be irresistible, even after many bitter disappointments." Hahahaha!!

Ella wasn't done there, then she talks about Saune's horrible book that deserved to be in the wastebasket. She sent it to Patti though... Here's the part where I start to wonder. Ella's personality did not lend herself to saying unkind things about other people, in fact she chastises Opa when he talks ill of other people in his letters. She might have been feeling feisty this day, or perhaps there is some code in here that she is trying to get past the censors. I'll never know- but either way- Ella is funny. By the way- I want to remind you to look on all of Ella's letters for those censor numbers. It's just odd, so subtle but sinister. Some of the numbers seem to have a signature by it- almost like a quality control measure.

I don't know who Tillie is, but she sounds like a close friend or family member. She sounds like a ray of sunshine for Ella. The Stiers are still hanging around (Ella's sister and her husband) waiting for their escape route to open up. I am not sure why they had to leave their home, perhaps they couldn't afford it?

Annchen (August's sister) had news of August but Ella didn't share it. That seems odd. Unless it was understood that it meant he remained status quo. I think Ella is hurt that August does not seem to care for her or worry about her at all.

Ella seems less anxious this letter, maybe she got a lift from Tillie's visit. I hope so.