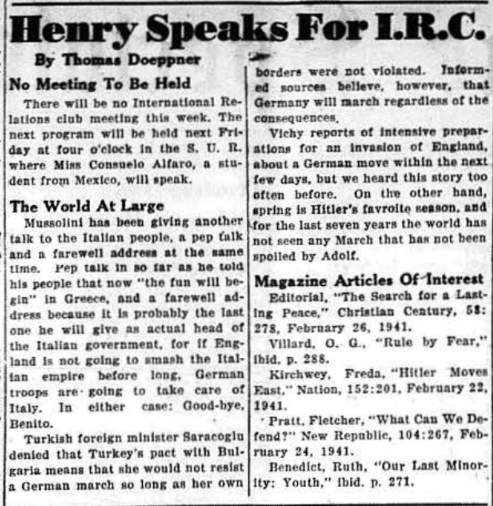 No Meeting to Be Held

There will be no International Relations club meeting this week. The next program will be held next Friday at four o'clock in the S.U.R. where Miss Consuelo Alfaro, a student from Mexico, will speak.

Mussolini has been giving another talk to the Italian people, a pep talk and a farewell address at the same time. Pep talk in so far as he told his people that now "the fun will begin" in Greece, and a farewell address because it is probably the last one he will give as actual head of the Italian government, for if England is not going to smash the Italian empire before long, German troops are going to take care of Italy. In either case: Good-bye, Benito.

Turkish foreign minister Saracoglu denied that Turkey's pact with Bulgaria means that she would not resist a German march so long as her own borders were not violated. Informed sources believe, however, that Germany will march regardless of consequences.

Vichy reports of intensive preparations for an invasion of England, about a German move within the next few days, but we heard this story too often before. On the other hand, spring is Hitler's favorite season, and for the last seven years the world has not seen any March that has not been spoiled by Adolf.

I giggled out loud when I read Opa's line:

"On the other hand, spring is Hitler's favorite season, and for the last seven years, the world has not seen any March that has not been spoiled by Adolf."

Sometimes humor is the only salve that keeps your entire egg from cracking. I lean on humor in tough times, and I love my Opa for passing that ability for dark humor on to my Father and then to me.
Posted by Sarah Snow at Wednesday, September 21, 2016