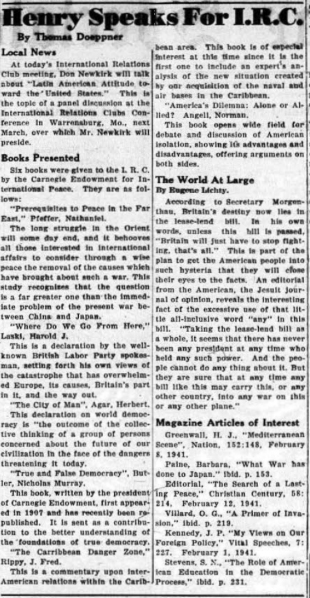 Six books were given to the I.R.C. by the Carnegie Endowment for International Peace. They are as follows:

"Prerequisites to Peace in the Far East," Pfeffer, Nathaniel.

The long struggle in the Orient will some day end, and it behooves all those interested in international affairs to consider through a wise peace the removal of the causes which have brought about such a war. This study recognizes that the question is a far greater one than the immediate problem of the present war between China and Japan.

"Where Do We Go From Here." Laski, Harold J.

This is a declaration by the well-known British Labor Party spokesman, setting forth his own views of the catastrophe that has overwhelmed Europe, its causes, Britain's part in it, and the way out.

This declaration on world democracy is "the outcome of the collective thinking of a group of persons concerned about the future of our civilization in the face of the dangers threatening it today.

This book, written by the president of the Carnegie Endowment, first appeared in 1907 and has recently been re-published. It is set as a contribution to the better understanding of true democracy.

This is a commentary upon inter-american relations within the Caribbean area. This book is of special interest in this time since it is the first one to include an expert's analysis of the new situation created by our acquisition of the naval and air bases in the Caribbean.

This book opens wide field for debate and discussion of American isolation, showing its advantages and disadvantages, offering  arguments on both sides.

The World At Large
By Eugene Lichty.

According to Secretary Morgenthaus, Britain's destiny now lies in the lease-lend bill. In his own words, unless this bill is passed, "Britain will just have to stop fighting, that's all." This is part of the plan to get the American people into such hysteria that they will close their eyes to the facts. An editorial from the American the Jesuit Journal of opinion, reveals the interesting fact of the excessive use of the little all-inclusive word "any" in this bill. "Taking the lease-lend bill as a whole, it seems that there has never been any president at any time who held any such power. And the people cannot do any thing about it. But they are sure that at any time any bill like this may carry this, or any other country, into any war on this or any other plane."

Stevens, S.N., "The Role of American Education in the Democratic Process," ibid. p. 231.

I don't know about you, but I think Eugene Lichty is against the US getting involved in the war. I wonder what the climate was at the school, if people debated about this. I wonder if the attack on Pearl Harbor completely silenced those debates or if people still felt they needed to keep isolated.

I think the United States has always hoped to be cool and isolated like Switzerland, and it certainly has the geographical advantages of ocean borders on two sides to help that isolation. However, the United States has always been playing on the world market, and I'm not sure it can ever be purely isolated. I'm not arguing for or against, just observing that the US tends to at least enter in the conversation of every major conflict world-wide. An isolationist America would be very difficult to maintain.

I wonder if the question for debate isn't "should" America stay isolated, but "can" it? Is it even possible?

I'm also seeing how the global conflicts appear to be happening in their corner of the world, and slowly they all seem to merge into one large, unified conflict. What is Opa thinking about all this?
Posted by Sarah Snow at Friday, September 16, 2016