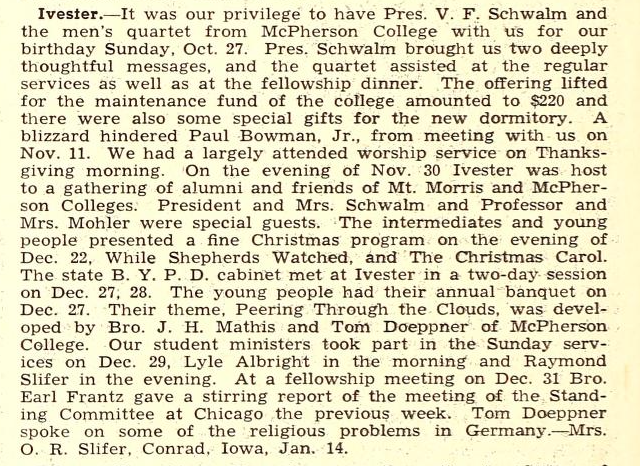 Ivester.- It was our privilege to have Pres. V.F. Schwalm and the men's quartet from McPherson College with us for our birthday Sunday, Oct. 27. Pre. Schwalm brought us two deeply thoughtful messages, and the quartet assisted at the regular services as well as the fellowship dinner. The offering lifted for the maintenance fund of the college amounted to $220 and there were also some  special gifts for the new dormitory. A blizzard hindered Paul Bowman, Jr., from meeting with us on Nov. 11. We had a largely attended worship service on Thanksgiving morning. On the evening of Nov. 30 Ivester was host to a gathering of alumni and friends of Mt. Morris and McPherson Colleges. President and Mrs. Schwalm and Professor and Mrs. Mohler were special guests. The intermediates and young people presented a fine Christmas program on the evening of Dec. 22, While Shepherds Watched, and The Christmas Carol. The state B.Y.P.D. cabinet met at Invester in a two-day session on Dec. 27, 28. The young people had their annual banquet on Dec. 27. Their theme, Peering Through the Clouds, was developed by Bro J. H. Mathis and Tom Doeppner of McPherson College. Our student ministers took part in the Sunday services on Dec. 29, Lyle Albright in the morning and Raymond Slifer in the evening. At a fellowship meeting on Dec. 31 Bro Earl Frantz gave a stirring report of the meeting of the Standing Committee at Chicago the previous week. Tom Doeppner spoke on some of the religious problems in Germany. -Mrs. O.R. Slider, Conrad, Iowa, Jan. 14.

I looked up Ivester Church of the Brethren and found that it is in a small town in Iowa, which explains why the woman writing this article lives just south of it in Iowa. It's almost a 7 hour drive by current standards, so unless the streets were about the same and the cars just as fast, I imagine it would have taken a little longer. This seems like a long haul for folks at McPherson to keep running back and forth! It must have been a special relationship between that church and the school.

I love that Opa's contribution to the last mentioned meeting was a talk on "some of the religious problems in Germany." That's an understatement! Although I do think it is important (it has been for me) to re-frame anti-semitism as not being primarily a religious issue in Germany, but a race issue. I think this was a problem in American education, that they focused on the discrimination as being primarily a religious intolerance, when it was actually completely about genetics.

Hitler instituted a new understanding of Jewish 'race' that made it possible that a Lutheran should find themselves in a concentration camp because they were genetically Jewish. It didn't matter if you told the guards you believed in Jesus or didn't believe anything at all- it was absolutely about race and genetics. This nuance is important. Because we have generally been able to develop a very real sense of sympathy for the plight of the Jews in the holocaust. If we understand that plight to be linked to racism and not just religion, it might help future generations be more mindful of injustices of racism rather than just injustices of religion.