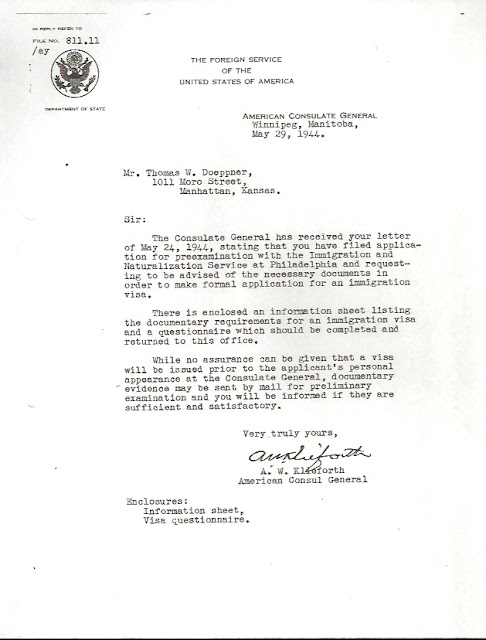 The Foreign Service
of the
United States of America

The Consulate General has received your letter of May 24, 1944, stating that you have filed application for pre-examinaton with the Immigration and Naturalization Service at Philadelphia and requesting to be advised of the necessary documents in order to make formal application for an immigration visa.

There is enclosed an information sheet listing the documentary requirements for an immigration visa and a questionnaire which should be completed and returned to this office.

While no assurance can be given that a visa will be issued prior to the applicant's personal appearance at the Consulate General, documentary evidence may be sent by mail for preliminary examination and you will be informed if they are sufficient and satisfactorily.

Here we go, another attempt towards becoming an American citizen, a journey Opa has been on since he arrived in 1939. He was shuffled between temporary visas, with large gaps in between when he had no legal status at all.

This time is similar to times in the past when he applied for pre-examination at the American Consul in Canada. The plan would be for him to cross the border, apply and receive the visa and then enter the United States on a regular immigration visa, the first step on a long journey towards naturalization.

Will it happen this time?
Posted by Sarah Snow at Tuesday, July 28, 2020 No comments: 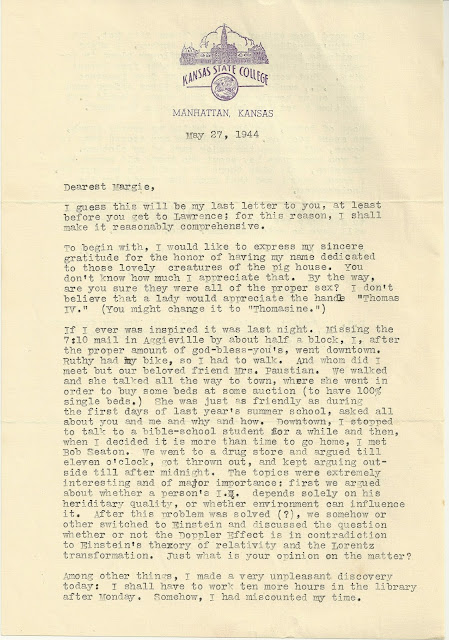 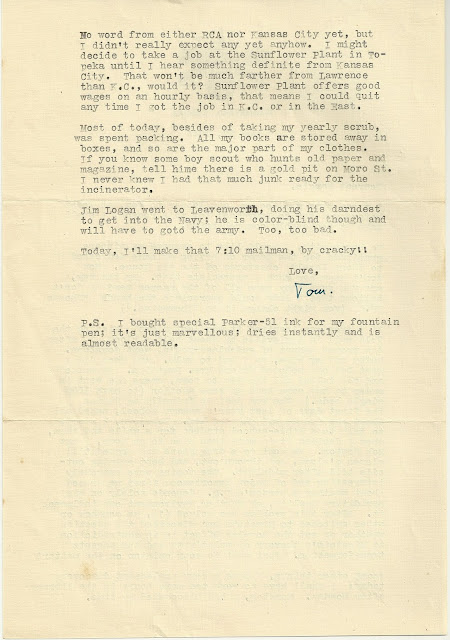 I guess this will be my last letter to you, at least before you get to Lawrence; for this reason, I shall make it reasonably comprehensive.

To begin with, I would like to express my sincere gratitude for the honor of having my name dedicated to those lovely creature of the pig house. You don't know how much I appreciate that. By the way, are you sure they were al of the proper sex? I don't believe that a lady would appreciate the handle "Thomas IV." (You might change it to "Thomasine.")

If I ever was so inspired it was last night. Missing the 7:10 mail in Aggieville by about a half a block, I, after the proper amount of god-bless-you's, went downtown. Ruthy had my bike, so I had to walk. And whom did I meet but our beloved friend Mrs. Paustian. We walked and she talked all the way to town, where she went in order to buy some beds at some auction (to have 100% single beds.) She was just as friendly as during the first days of last year's summer school, asked all about you and me and why and how. Downtown, I stopped to talk to a bible-school student for a while and then, when I decided it is more than time to go home, I met Bob Seaton. We went to a drug store and argued till eleven o'clock, got thrown out, and kept arguing outside till after midnight. The topics were extremely interesting and of major importance: first we argued about whether a person's IQ depends solely on his hereditary quality, or whether environment can influence it. After this problem was solved (?), we somehow or other switched to Einstein and discussed the question whether or not the Doppler Effect is in contradiction to Einstein's theory of relativity and the Lorentz transformation. Just what is your opinion on the matter?

Among other things, I made a very unpleasant discovery today: I shall have to work ten more hours in the library after Monday. Somehow, I had miscounted my time.

No word from either RCA nor Kansas City yet, but I didn't really expect any yet anyhow. I might decide to take a job at the Sunflower Plant in Topeka until I hear something definite from Kansas City. That won't be much farther from Lawrence than K.C., would it? Sunflower Plant offers good wages on an hourly basis, that means I could quit any time I got the job in K.C. or in the East.

Most of today, besides taking my yearly scrub, was spent packing. All my books are stored away in boxes, and so are the major part of my clothes. If you now some Boy Scout who hunts old paper and magazine, tell him there is a gold pit on Moro St. I never knew I had that much junk ready for the incinerator.

Jim Logan went to Leavenworth, doing his darnedest to get into the Navy; he is color-blind though and will have to go to the army. Too, too bad.

P.S. I bought a special Parker-51 ink for my fountain pen; it's just marvelous; dries instantly and is almost readable.

First things first: in the pen collecting world: the Parker-51 maintains its legacy (both the pen and the ink) as one of the most popular pens/ink made. Opa wasn't the only one impressed.

Moving along to Opa's letter. I love Opa, I really do, but my goodness he's a little smug. I know he's trying to be funny and I'm sure Grandmother took it as such. However, I rolled my eyes at his monologue about all the intellectual arguments he got into with his friend Bob, and then the ending when he asks Grandmother what her opinion is on the Einstein discussion. Obviously she doesn't know (nor does she care), and he's sort of teasing her about that.

At the same time, how much more "American College experience" can you get? This is the time and space for hours long discussions on theories and whatever else floats your boat. There is nothing wrong with that (I think it is good!). Just maybe don't flaunt your knowledge to someone who isn't in your major. We all have our spheres.

Opa is making plans (or trying) and packing for a move that he does not yet know the destination. He's hoping to hear from one of the major corporations who have expressed interest in him despite his German-ness. In the meantime he has a lead with the Sunflower Plant. 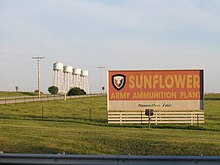 Here's what it looked like in 2015. In 1941, when it was built, it was the largest smokeless powder plant. Opa says the plant paid decently and hourly, so it was a great back-up plan for him until he heard from the other companies. It's a good plan.

Opa has gotten use to making it work and flying by the seat of his pants. Only now he has Grandmother as a nice companion for the ride.

We'll see how it goes!