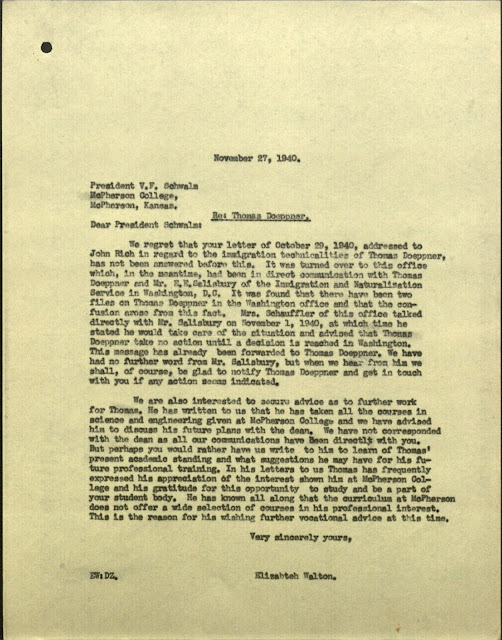 We regret that your letter of October 29, 1940, addressed to John Rich in regard to the immigration technicalities of Thomas Doeppner, has not been answered before this. It was turned over to this office which, in the meantime, had been in direct communication with Thomas Doeppner and Mr. E.E. Salisbury of the Immigration and Naturalization Service in Washington, D.C. It was found that there have been two files on Thomas Doeppner in the Washington office and that the confusion arose from this fact. Mrs. Schauffler of this office talked directly with Mr. Salisbury on November 1, 1940, at which time he stated he would take care of the situation and advised that Thomas Doeppner take no action until a decision is reached in Washington. This message has already been forwarded to Thomas Doeppner. We have had no further word from Mr. Salisbury, but when we hear from him we shall of course, be glad to notify Thomas Doeppner and get in touch with you if any action seems indicated.

We are also interested to secure advice as to further work for Thomas. He has written to us that he has taken all the courses in science and engineering given at McPherson College and we have advised him to discuss his future plans with the dean. We have not corresponded with the dean as all our communications have been directly with you. But perhaps you would rather have us write to him to learn of Thomas' present academic standing and what suggestions he may have for his future professional training. In his letters to us Thomas has frequently expressed his appreciation of the interest shown him at McPherson College and his gratitude for this opportunity to study and be a part of your student body. He has known all along that the curriculum at McPherson does not offer a wide selection of courses in his professional interest. That is the reason for his wishing further vocational advice at this time.

So Opa had two files. I can't believe how long it took for them to figure it out and what a roller coaster he had to be on while everyone else was getting their act together. But at least for now he gets to stay in the US- not so much by permission but by omission as they need to consolidate his cases and make a new decision based on all the information.

In the meantime - Elizabeth Walton- a new name from the American Friends Service Committee- has been in touch with McPherson College President V.F. Schwalm. In this letter she caught him up on what's happening, but I'm sure he already knew. She also let him know that Opa was starting to explore his educational options that allowed for more advanced engineering and technical training. I love how she emphasizes how grateful Opa has been to McPherson. It's almost like she's trying to soften the blow that he needs something that McPherson can't offer. But Opa has always been forthright about his educational goals, and I think Schwalm has always known Opa would need to move on at some point.

This is why Schwalm and McPherson are so special... they welcomed and supported Opa even when they knew he might not finish out his school career there. They knew that they might just be a way-station for this boy. This is true hospitality. I think about some of the organizations that I have been a part of and how they have been less willing to help people who are not members or who won't be around long enough to give back. McPherson helped Opa with no promises of a return and I bet that Schwalm will do whatever he can to keep helping him in this time of transition.