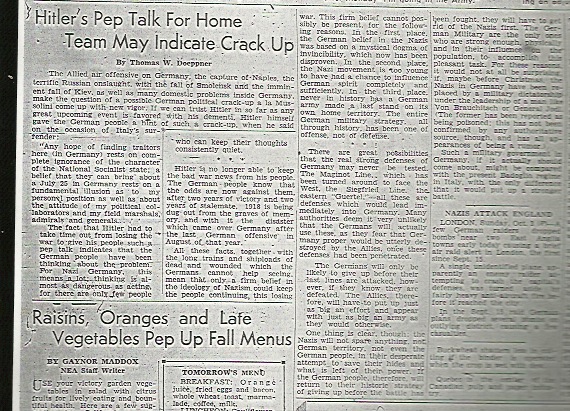 Article by Opa in The Mercury Chronicle

Hitler's Pep Talk For Home Team May Indicate Crack Up

The Allied air offensive on Germany, the capture of Naples, the terrific Russian onslaught, with the fall of Smolensk and the imminent fall of Kiev, as well as many domestic problems inside Germany, make the question of a possible German political crack-up a la Mussolini come up with new vigor. If we can trust Hitler in so far as any great upcoming event is favored with his dementi, Hitler himself gave the German people a hint of such a crack-up, when he said on the occasion of Italy's surrender:

"Any hope of finding traitors here (in Germany) rests on complete ignorance of the character of the National Socialist state: a belief that they can bring about a July 25 in Germany rests on a fundamental illusion as to my personal position as well as about the attitude of my political collaborators and my field marshals, admirals, and generals..."

The fact that Hitler had to take time out from losing the war to give his people such a pep talk indicates that the German people have been thinking about the problem. For Nazi Germany, this means a lot; thinking is almost as dangerous as acting, for there are only few people who can keep their thoughts consistently quiet.

Hitler is no longer able to keep the bad war news from his people. The German people know that the odds are now against them, after two years of victory and two years of stalemate. 1918 is being dug out from the graves of memory, and with it the disaster which came over Germany after the last German offensive in August of that year.

All these facts, together with the long trains and shiploads of dead and wounded which the Germans cannot help seeing, mean that only a firm belief in the ideology of Nazism could keep the people continuing this losing war. This firm belief cannot possibly be present, for the following reasons. In the first place, the German belief in the Nazis was based on a mystical dogma of invincibility, which now has been disproven. In the second place, the Nazi movement is too young to have had a chance to influence German spirit completely and sufficiently. In the third place, never in history has a German army made a last stand on its own home territory. The entire German military strategy- all through history, has been one of offense, not of defense.

There are real possibilities that the real strong defenses of Germany may never be tested. The Maginot Line, which has been turned around to face the West, the Siegfried Line, the eastern "Guertel," all these are defenses which would lead immediately into Germany. Many authorities deem it very unlikely that the Germans will actually use these, as they fear that Germany proper would be utterly destroyed by the Allies, once these defenses had been penetrated.

The Germans will only be likely to give up before their last lines are attacked, however, if they know they are defeated. The Allies, therefore, will have to put up just as big an army as they would otherwise.

One thing is clear, though: the Nazis will not spare anything, not German territory, not even the German people, in their desperate attempts to save their hides and what is left of their power. If the German people, therefore, will return to their historic strategy of giving up before the battle has been fought, they will have to get rid of the Nazis first. The German Military are the only ones who are strong enough physically and in their influence on the population, to accomplish this pleasant task. For these reasons, it would not at all be surprising, if, maybe before Christmas, the Nazis in Germany have been replaced by a military dictatorship under leadership of a man like Von Brauchitsch or General Jodl (The former has been reported as being poisoned; this has not been reported by any authoritative source, though, and has all appearances of being a rumor.)

Such a military government in Germany, if it actually should come about, might be compared with the present Badoglio regime in Italy, with the only difference that it would put up a stronger battle.

Whew. I had to do a decent amount of research to catch up on this one. I think this might be the first time that Opa doesn't get everything right- or at least his predictions are a bit too optimistic, even for him.

Opa talks about July 25th, the fall of Fascist Italy, and how it reverberated into Germany. Germany isn't doing all that great in the war, the Soviets have reclaimed territory and are moving closer to their borders. The Allies are gaining footholds and winning more than losing, which is a signal of the tide changing. Germany is aware of this, and Opa is thinking about how it's affecting them. Opa rightly points out that Hitler's mere mention of the Fascist overturn in Italy and how it doesn't affect them at all is a sign that the Nazi government is feeling the strain.

Now here is where I think Opa misses the boat. He scoffs at Nazism as being too young, too dependent on the illusion of invincibility (which he feels has been proven wrong), to really hold claim over the German people in the face of defeat. He assumes that if the defeat continues, that the German people (with the military as their powerhouse) will capitulate the Nazi government and fight or surrender on their own terms. He remembers that Germany is not one to fight to the death and destruction of every town, but rather gives in before total annihilation. Opa is actually quite generous in this analogy because he gives the German people the benefit of being able to weigh the costs and make a sound decision about when to let go.

He invokes the memory of 1918, the year the first world war was over. Germany was absolutely miserable, and their defeat meant that they would be humiliated before the victors. The victors of that war focused less on creating lasting peace, and more on humbling Germany. This of course, only created a breeding ground for Nazism and the need for Germany to prove themselves strong and better than everyone else. Opa was born into the slowly improving depression that was Germany after the first world war. His entire childhood and young adulthood was shaped by the two wars.

Opa predicts that the Germans would shed the new coat of Nazism and protect their country against being totally humiliated again. He was, unfortunately, wrong. I think his perspective of the German people was largely shaped by his location. He was a Berliner, living in the city of progressives and thinkers. His parents were educated and acutely aware of the political and social situation. But what they didn't know (at least I guess this to be so) was the dangerous ignorance and fear that lurked in the rural towns and uneducated masses. Even in the face of the terror caused by Nazis, Opa assumed that the Germans would come to their senses.

Sound familiar? I remember after the election last year that I was astounded. How was it possible that this person of terrible moral and fiscal courage could be lauded as a savior of the country? But I was shocked because of where I live. I live surrounded by the educated elite. I live in a suburb, in homes without worry of electric or water being shut off. I don't know about the fear and ignorance that fuels some of the hate I have seen explode this last year. I have been trying to listen better, to learn more, to become less ignorant myself. But one thing I have learned is this: I didn't know America as well as I thought I did.

Opa had been through some of the same questioning, wondering how Hitler and the rise of anti-semitism (and the rise of hatred towards anything "different") could have become so prominent and popular. But if I am honest, this article tells me he hasn't admitted yet that his home may not be what he thought. As for Nazism- we're still not rid of it. The ideology, even having suffered resounding defeat in the second world war, is still rampant. Even here. I don't pretend to understand it, but I will try not to underestimate it.

I remember Opa's lingering question, even as an older man, was how a civilized country like Germany could fall so far. He could never answer it fully. I feel cynical in saying this, but I think the answer lies in recognizing that we are not as civilized as we think we are.
Posted by Sarah Snow at Thursday, November 02, 2017 1 comment: