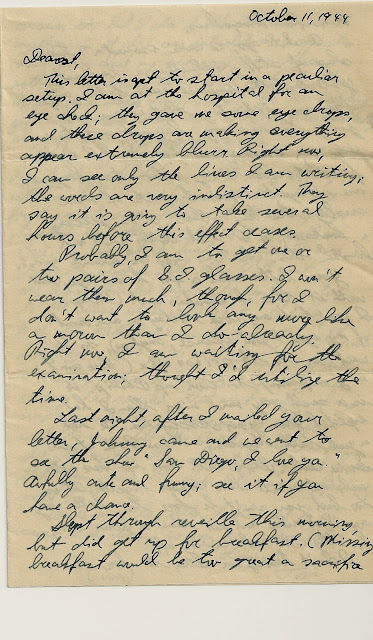 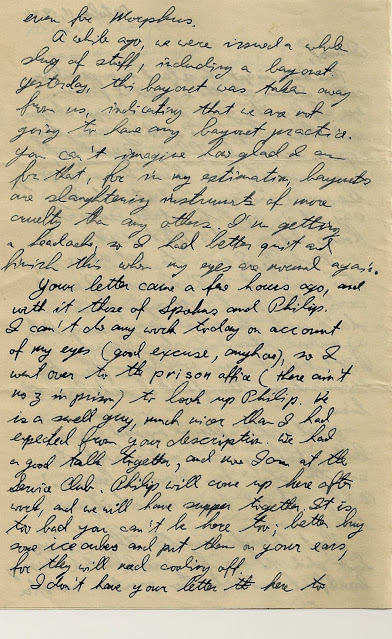 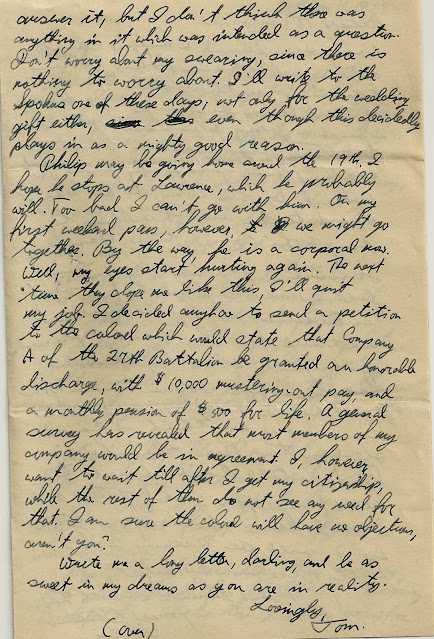 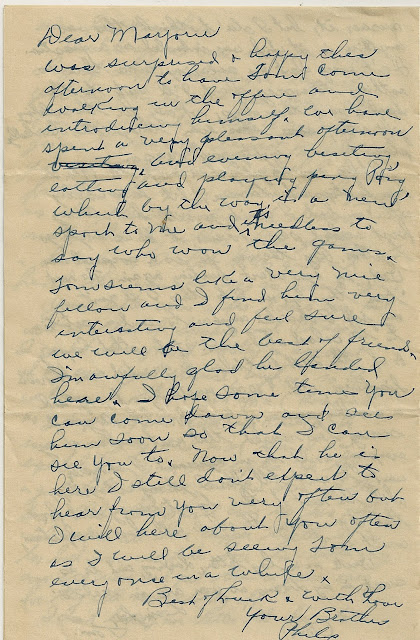 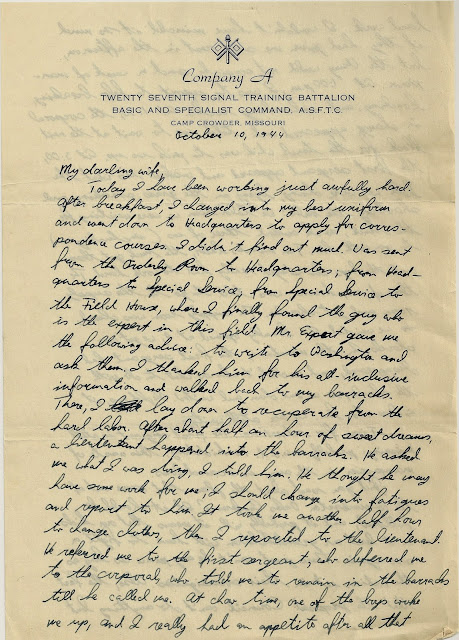 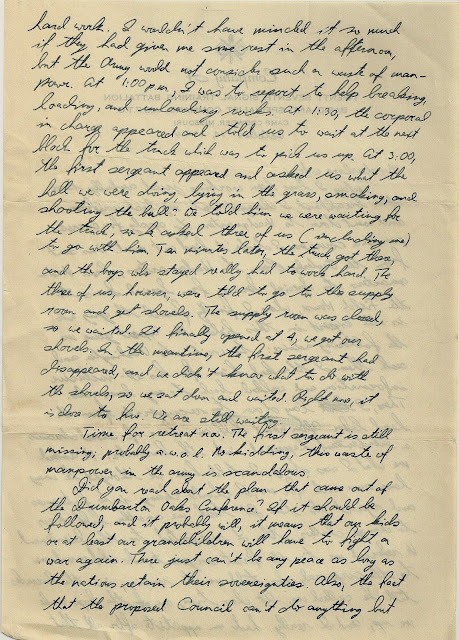 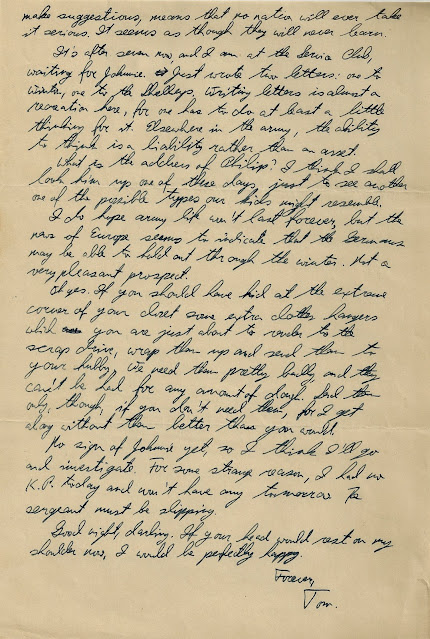 Letter from Opa to Grandmother, October 10, 1944.
Transcription:
October 10, 1944
My darling wife,
Today I have been working just awfully hard. After breakfast, I changed into my best uniform and went down to Headquarters to apply for correspondence courses. I didn't find out much. Was sent from the Orderly Room to Headquarters; from Headquarters to Special Service, from Special Service to the Field House where I finally found the guy who is the expert in this field. Mr. Expert gave me the following advice: to write to Washington and ask them. I thanked him for his all-inclusive information and walked back to my barracks. There, I lay down to recuperate from the hard labor. After about half an hour of sweet dreams, a lieutenant happened into the barricks. He thought he may have some work for me; I should change into fatigues and report to him. It took me another half hour to change clothes, then I reported to the lieutenant. He referred me to the first sergeant, who deferred me to the corporal, who told me to remain in the barricks till he called me. At chow time, one of the boys woke me up, and I really had an appetite after all that hard work. I wouldn't have minded it so much if they had given me some rest in the afternoon, but the Army would not consider such a waste of man-power. At 1:00pm, I was to report to help breaking, loading, and unloading rocks. At 1:30, the corporal in charge appeared and told us to wait at the next block for the truck which was to pick us up. At 3:00, the first sergeant appeared and asked us what the hell we were doing, lying in the grass, smoking, and shooting the bull? We told him we were waiting for the truck, so he asked three of us (including me) to go with him. Ten minutes later, the truck got there, and the boys who stayed really had to work hard. The three of us, however, were told to go to the supply room and get shovels. The supply room was closed, so we waited. It finally opened up at 4, we got our shovels. In the meantime, the first sergeant had disappeared, and we didn't know what to do with the shovels, so we sat down and waited. Right now, it is close to five. We are still waiting.
Time for retreat now. The first sergeant is still missing; probably a.w.o.l. No kidding, this waste of manpower in the army is scandalous.
Did you read about the plan that came out of the Dumbarton Oaks Conference? If it should be followed, and it probably will, it means that our kids or at least our grandchildren will have to fight a war again. There just can't be any peace as long as nations retain their sovereignties. Also, the fact that the proposed counsel can't do anything but make suggestions, means that no nation will ever take it serious. It seems as though they will never learn.
It's after seven now, and I am at the Service Club, waiting for Johnnie. Just wrote two letters: one to Winton, one to the Shelleys. Writing letters is almost a recreation here, for one has to do at least a little thinking for it. Elsewhere in the army, the ability to think is a liability rather than an asset.
What is the address of Philip? I think I shall look him up one of these days, just to see another one of the possible types our kids might resemble.
I do hope army life won't last forever, but the news of Europe seems to indicate that the Germans may be able to hold out through the winter. Not a very pleasant prospect.
Oh yes. If you should have hid at the extreme corner of your closet some extra clothes hangers which you are just about to render to the scrap drive wrap them up and send them to your hubby. We need them pretty badly, and they can't be had for any amount of dough. Send them only, though, if you don't need them, for I get along without them better than you would.
No sign of Johnnie yet, so I think I'll go investigate. For some strange reason, I had no K.P. today and won't have any tomorrow. The sergeant must be slipping.
Good night, darling. If you head would rest on my shoulder now, I would be perfectly happy.
Forever,
Tom.
I do believe this letter contains within it all of my arguments for why I struggle to work for institutions of all sorts. My tolerance for inefficiency and waste is severely low. I have become much better, even recently, as my fierce need for efficiency has some terrible consequences for my sanity (and those around me). But my God, this army day of Opa's is testing my zen-like growth.
Anyone in any institution can attest that the army is not the only behemoth with efficiency problems. I think the whole thing would be easier to swallow if they weren't so insistent on pretending they are such a well-oiled machine. I think I mentioned this before, but just like you can rag on your mother but no one else is allowed to- those in the military all know very well how ridiculous things are- but if you are NOT in the military- you better shut your mouth. I get a pass as a military brat.
I was once a part of an organization (I won't say which, to protect the innocent) that had every bathroom in the facility outfitted with brand new, fancy soap dispensers and hand dryers. Just six months later the bathrooms were remodeled, with recent upgrades cast to the side. Or maybe it was the door locks on the stalls. I can't remember, but it was ridiculous.
Posted by Sarah Snow at Wednesday, October 20, 2021 No comments: 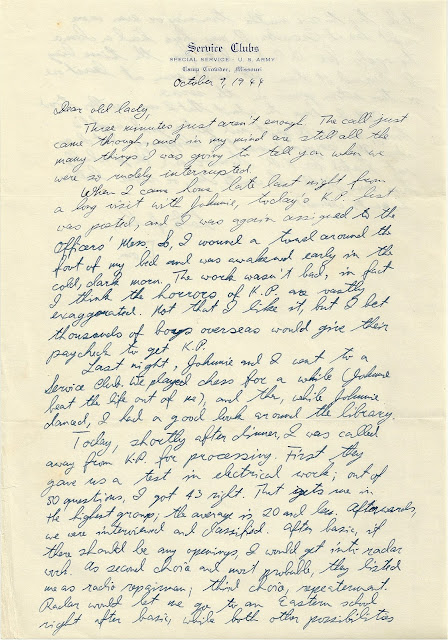 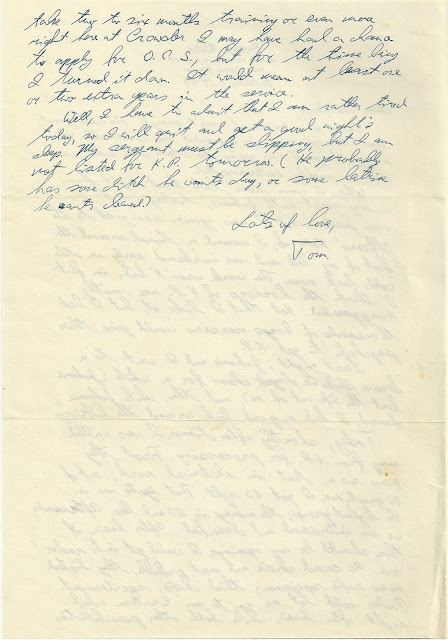 Letter from Opa to Grandmother, October 9, 1944.
Transcription:
October 9, 1944
Dear old lady,
Three minutes just aren't enough. The call just came through, and in my mind are still all the many things I was going to tell you when we were so rudely interrupted.
When I came home late last night from a long visit with Johnnie, today's K.P. list was posted, and I was again assigned to the Officer's Mess. So, I wound a towel around the foot of my bed and was awakened early in the cold, dark more. The work wasn't bad, in fact I think the horrors of K.P. are vastly exaggerated. Not that I like it, but I bet thousands of boys overseas would give their paycheck to get K.P.
Last night, Johnnie and I went to a Service Club. We played chess for a while (Johnnie beat the life out of me), and then, while Johnnie danced, I had a good look around the library.
Today, shortly after dinner, I was called away from K.P. for processing. First, they gave us a test in electrical work; out of 50 questions, I got 43 right. That gets me in the highest group; the average is 20 and less. Afterwards, we were interviewed and classified. After basic, if there should be any openings, I would get into radar work. As second choice and most probable, they listed me as radio repairman; third choice, repeaterwant. (not sure of this transcription?) Radar would let me go to an Eastern school right after basic, while both other possibilities take two to six months training our even more right here at Crowder. I may have had a chance to apply for O.C.S., but for the time being I turned it down. It would mean at least one or two extra years in the service.
Well, I have to admit that I am rather tired today, so I will quit and get a good night's sleep. My sergeant must be slippery, but I am not listed for K.P. tomorrow. (He probably has some ditch he wants dug, or some latrine he wants cleaned.)
Lots of love,
Tom.
When Opa mentioned that he bet thousands of boys overseas would give their paycheck for K.P., I had a brief moment when I thought he was talking about Europeans. Then I realized he was talking about American soldiers, which of course makes absolute sense. But for some reason this realization made me sad.
Opa's mind is off of his past and those from home, and on the present, in his new country. Sympathy and perspective was gained by comparing to US soldiers, not European soldiers, or  citizens. It's a shift for Opa. It makes me a little sad. I know he still cares for folks back in Germany, still worries about his family, but something in this shift shows me that Opa is beginning to forget.
When we were growing up, Opa didn't talk much about Germany to us. He didn't ever mention his friends, we barely heard about his family. Even in his autobiography, everything was written as a prelude to him joining the army, as if he were hoping and planning to have the opportunity to be in the US military and fight against the Nazis. He certainly never mentioned his past pacifism.
This is one of those subtle moments when Opa moves into his new life, leaving the old behind.
Posted by Sarah Snow at Friday, October 15, 2021 No comments: 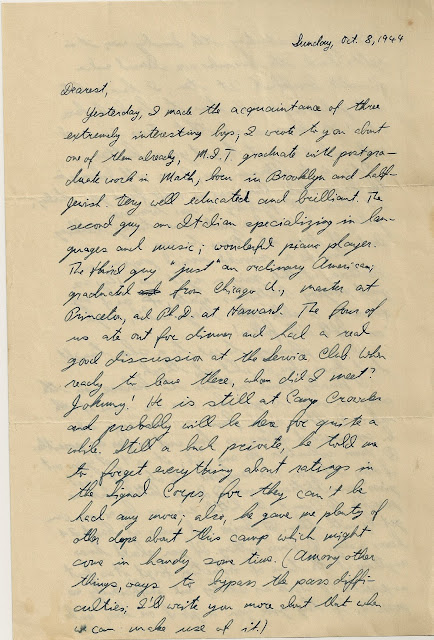 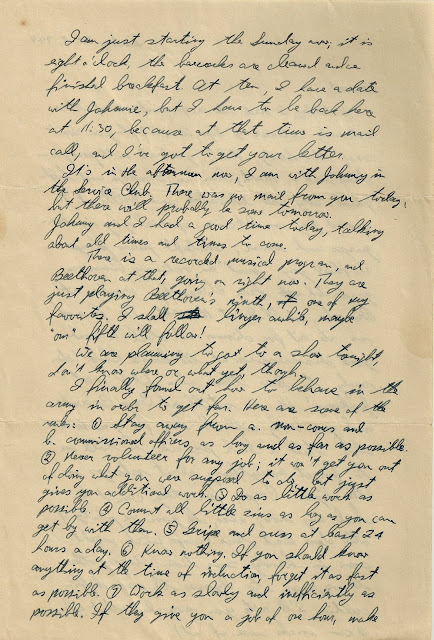 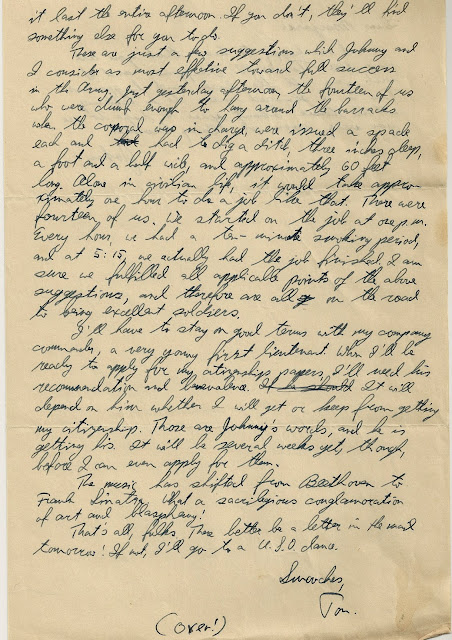 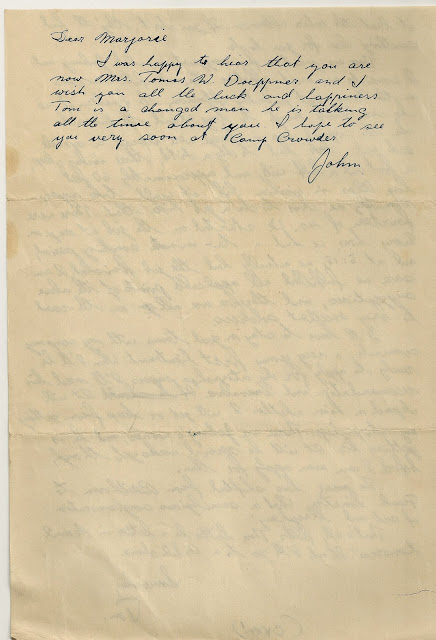 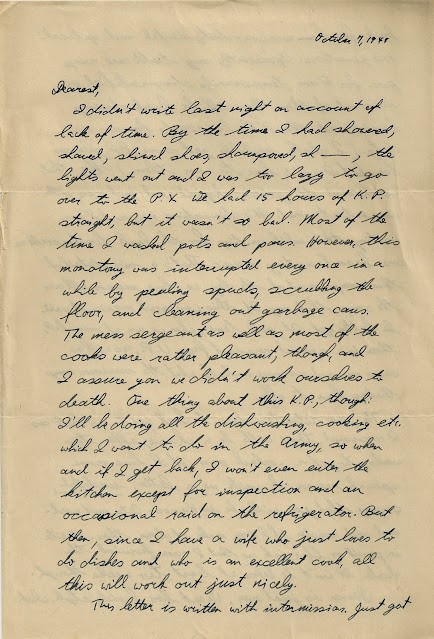 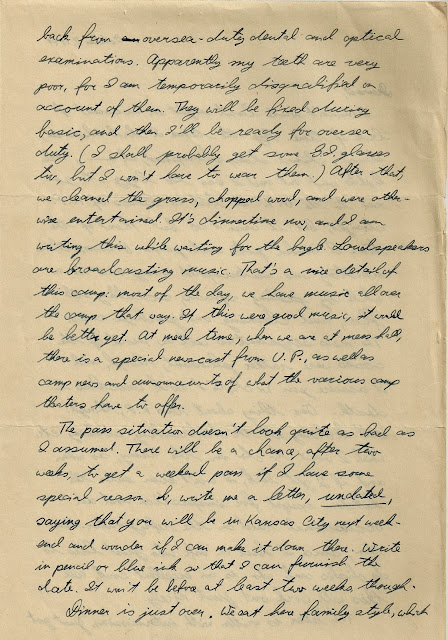 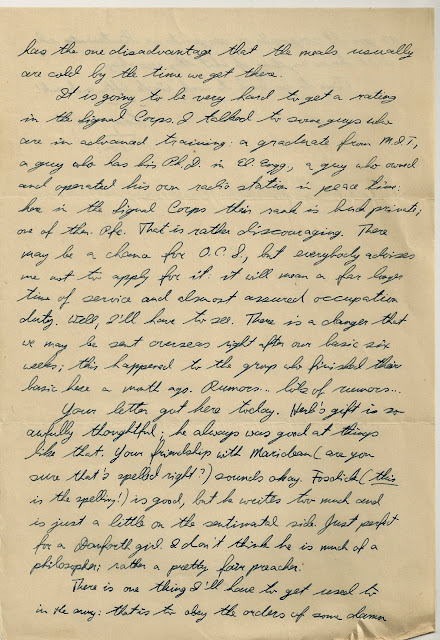 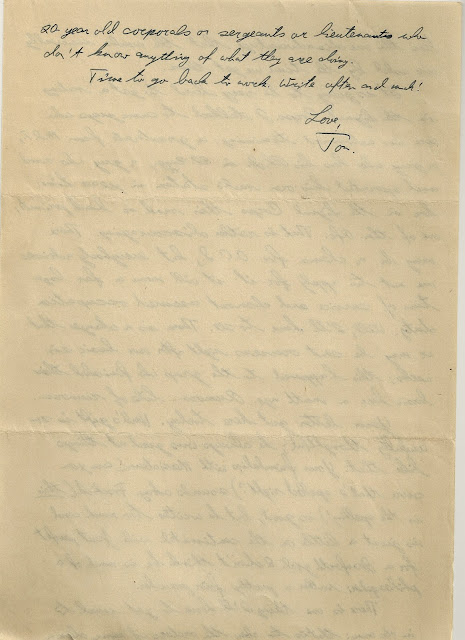