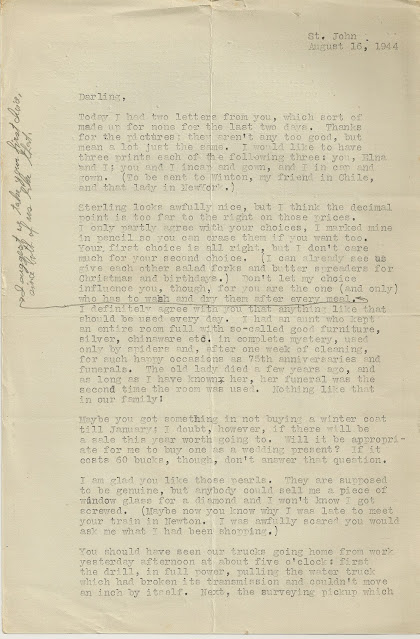 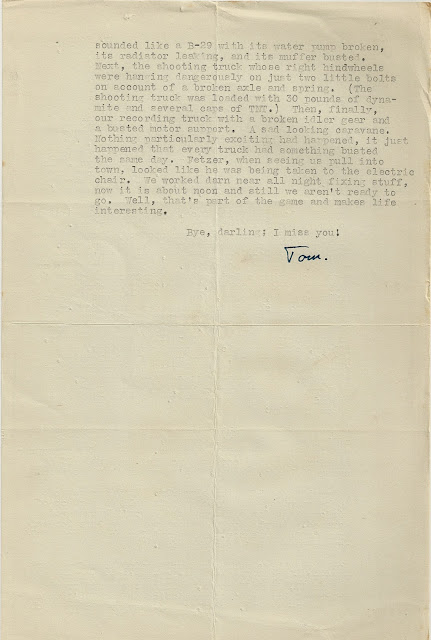 Letter from Opa to Grandmother, August 16, 1944.
Transcription:
St. John
August 16, 1944
Darling,
Today I had two letters from you, which sort of made up for the last two days. Thanks for the pictures; they aren't any too good, but mean a lot just the same. I would like to have three prints each of the following three: you, Elna and I; you and I in cap and gown, and I in cap and gown. (To be sent to Winton, my friend in Chile, and that lady in New York.)
Sterling looks awfully nice, but I think the decimal point is too far to the right on those prices. I only partly agree with your choices, I marked mine in pencil so you can erase them if you want too. Your first choice is all right, but I don't care much for your second choice. (I can already see us give each other salad forks and butter spreaders for Christmas and birthdays.) Don't let my choice influence you, though, for you are the one (and only) who has to wash and dry them after every meal. (handwritten note on the margin:) I suggest we take your first choice, since both of us like that.
I definitely agree with you that anything like that should be used every day. I had an aunt who kept an entire room full with so-called good furniture, silver, chinaware etc. in complete mystery, used only by spiders and, after one week of cleaning, such happy occasions as 75th anniversaries and funerals. The old lady died a few years ago, and as long as I have known her, her funeral was the second time the room was used. Nothing like that in our family!
Maybe you got something in not buying a winter coat till January; I doubt, however, if there will be a sale this year worth going to. Will it be appropriate for me to buy one as a wedding present? If it costs 60 bucks, though, don't answer that question.
I am glad you like those pearls. They are supposed to be genuine, but anybody could sell me a piece of window glass for a diamond and I won't know how I got screwed. (Maybe now you know why I was late to meet your train in Newton. I was awfully scared you would ask me what I had been shopping.)
You should have seen our trucks going home from work yesterday afternoon at about five o'clock: first the drill, in full power, pulling the water truck which had broken its transmission and couldn't move an inch by itself. Next, the surveying pickup which sounded like a B-29 with its water pump broken, its radiator leaking, and its muffer busted. Next, the shooting truck whose right hind wheels were hanging dangerously on just two little bolts on account of a broken axle and spring. (The shooting truck was loaded with 30 pounds of dynamite and several caps of TNT.) Then, finally, our recording truck with a broken idler gear and a busted motor support. A sad looking caravan. Nothing particularly exciting had happened, it just happened that every truck had something busted the same day. Fetzer, when seeing us pull into town, looked like he was being taken to the electric chair. We worked darn near all night fixing stuff, now it is about noon and still we aren't ready to go. Well, that's part of the game and makes life interesting.
Bye, darling; I miss you!
Tom.
Grandmother and Opa are in the business of picking out silverware and china, a sort of rite of passage for many engaged couples in America. Opa isn't so sure they can afford to ask for or buy the sterling, I honestly don't know what they ended up with. He made me laugh with all his commentary (and I'm assuming a joke when he said Grandmother would be cleaning the flatware). I laughed because as he soon realized with his handwritten note: they agreed on the first choice. Not sure why the rest of the conversation was even needed.
I did find his story about the aunt with the room and dishes "used only by spiders" quite fascinating! I don't know who that aunt was, but I do know that this commitment to using all the nice dishes and silverware was upheld. When we were growing up, if the weather did not allow us to eat outside (which, my mother would say was quite a broad criteria, we ate outside most of the time) we would eat in the dining room. My Grandparents' dining room was what you might consider formal in the mid-century modern way. The room was long and narrow with a bay window looking out into the back yard (the view was Grandmother's amazing terraced garden). The table and chairs were all part of a nice dining room set, with a black china cabinet (which I now own and painted white). There would always be a table cloth, cloth napkins, and a full array of food (to include vegetables and rolls) arranged on the table. We were expected to sit throughout the meal and engage in conversation, with very little outside entertainment available other than staring out the window. Oh, and there was almost always desert on the menu. That was nice.
Opa's broke-down work caravan sounds hilarious, but also I think it's a small miracle he hasn't injured himself on this job. All the machinery always breaks. And they have dynamite. Seems like a bad combination.
I'm glad I don't have a room used only by spiders in my house. They're all used by spiders, and dogs, and children, and the regular chaos of life. Wouldn't have it any other way.
Posted by Sarah Snow at Tuesday, February 02, 2021 No comments: