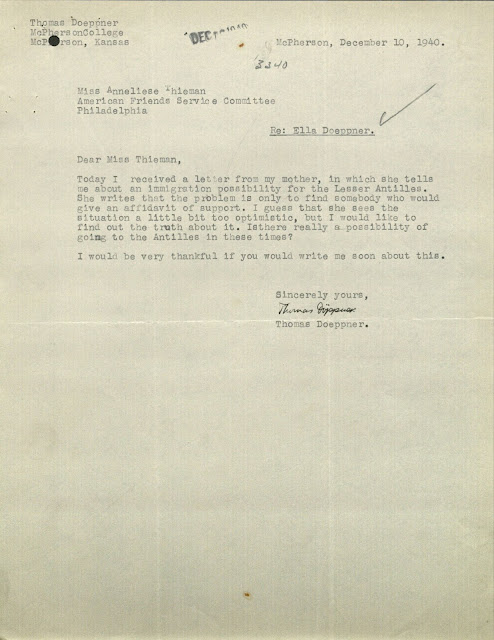 Today I received a letter from my mother, in which she tells me about an immigration possibility for the Lesser Antilles. She writes that the problem is only to find somebody who would give an affidavit of support. I guess that she sees the situation a little bit too optimistic, but I would like to find out the truth about it. Is there really a possibility of going to the Antilles in these times?

I would be very thankful if you would write me soon about this. 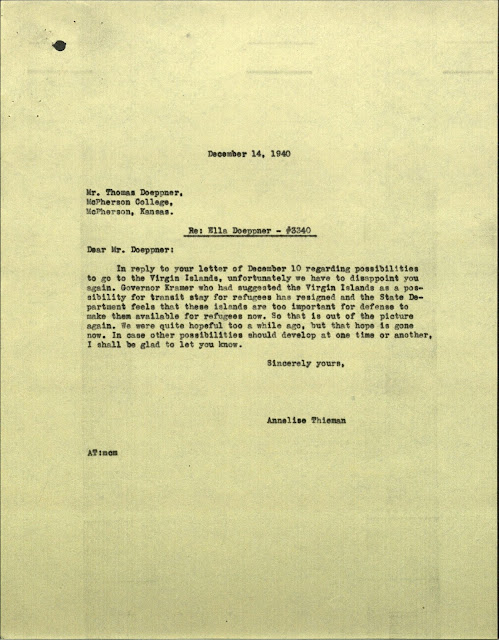 Response from Anneliese Thieman of AFSC to Opa

In reply to your letter of December 10 regarding possibilities to go to the Virgin Islands, unfortunately we have to disappoint you again. Governor Kramer who had suggested the Virgin Islands as a possibility for transit stay for refugees has resigned and the State Department feels that these islands are too important for defense to make them available for refugees now. So that is out of the picture again. We were quite hopeful too a while ago, but that hope is gone now. In case other possibilities should develop at one time or another, I shall be glad to let you know. 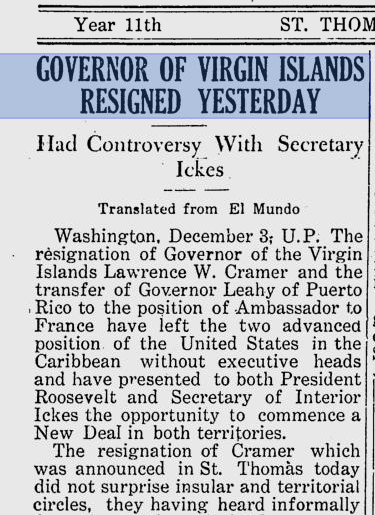 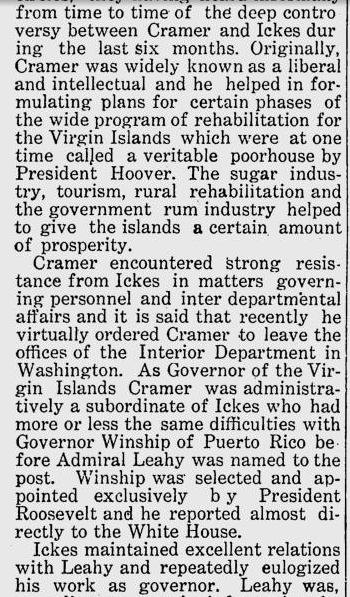 Washington, December 3; U.P. The resignation of Governor of the Virgin Islands Lawrence W. Cramer and the transfer of Governor Leahy of Puerto rico to the position of Ambassador to France have left the two advanced position of the United States in the Caribbean without executive heads and have presented to both President Roosevelt and Secretary of Interior Ickes the opportunity to commence a New Deal in both territories.

The resignation of Cramer which was announced in St. Thomas today did not surprise insular and territorial circles, they having heard informally from time to time of the deep controversy between Cramer and Ickes during the last six months. Originally, Cramer was widely known as a liberal and intellectual and he helped in formulating plans for certain phases of the wide program of rehabilitation for the Virgin Islands which were at one time called a veritable poorhouse by President Hoover. The sugar industry, tourism, rural rehabilitation and the government rum industry helped to give the islands a certain amount of prosperity.

Cramer encountered strong resistance from Ickes in matters governing personnel and inter departmental affairs and it is said that recently he virtually ordered Cramer to leave the offices of the Interior Department in Washington. As Governor of the Virgin Islands Cramer was administratively a subordinate of Ickes who had more or less the same difficulties with Governor Winship of Puerto Rico before  Admiral Leahy was named to the post. Winship was selected and appointment exclusively by President Roosevelt and he reported almost directly to the White House.

Ickes maintained excellent relations with Leahy and repeatedly eulogized his work as governor. Leahy was, according to certain information the first governor of Puerto Rico with whom Ickes has had cordial relations.

You guys. This one makes me angry. Let's take it one step at a time. Opa receives his mother's letter from November 20th on December 10th (yes- you can click on that little link and it'll take you to her letter). The time delay isn't as bad as I thought and makes me really wonder why Ella isn't getting any of Opa's letters. Opa immediately writes to the American Friends Service Committee (AFSC). These are the folks that found the tiny window of opportunity for him to come to the United States, and as a refugee support organization, they tend to be in on all the viable paths for emigration. Opa writes them about this Antilles rumor, hoping that maybe his mom found a loophole to get herself to safety. You can tell that Opa is clear-headed about the possibilities, but that doesn't stop him from trying.

Annaliese from the AFSC writes back a few days later with the expected, but still disappointing response. The Governor who was refugee-friendly and seemed to have to the power to welcome refugees to the Islands; he's resigned.

I know that if any of us know anything about politics- we're all thinking the same thing: his welcome message to the refugees did not go over well with someone higher up. And sure enough- you get this vague article about how the Governor of the Virgin Islands (which is a part of the Lesser Antilles) had "controversy" with the Secretary of Interior, Ickes. First of all- his name is Ickes and it seems most of the article talks about how he doesn't get along with most folk. Anyhow, the article leaves out any detail and just goes broad stroke, but I found another article that gave me some more information about the "controversy." This article (yeah go ahead- read it- but come back)... this is a fascinating article about just how actively some people in government worked to thwart refugee immigration to the United States.

I have to remind myself that this side of the story (the side where fear rules and people in need of safety perish) is only one side. I was recently at the Holocaust Museum to check in with my librarian/archivist friends Ron and Becky. Becky was traveling to obtain some information that supports a new book she is publishing (I will give you the link to it as soon as it's available). In her book she explores about a rarely talked-about policy: when the US government decreed to help fight the eradication of the Jews in Nazi Europe. They did! I know, I was shocked too. Like I said, in history, there is always another angle of the story.

With that caveat, let's all agree that Ickes was not one of the helpers. At least not in retrospect. He and others like him worked hard to prevent refugees from infiltrating the United States- security and fear trumping humanity and evidence.

This blockade of a viable exit for Ella- it angers me. How did Opa tell Ella? His heart must have ached. Bad news and more bad news. Would Ella get a break?