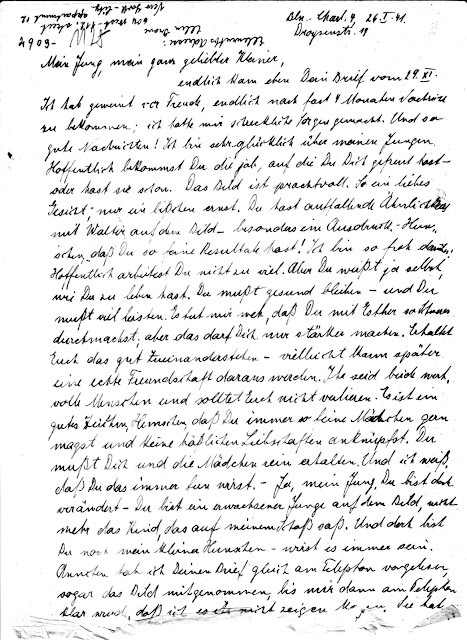 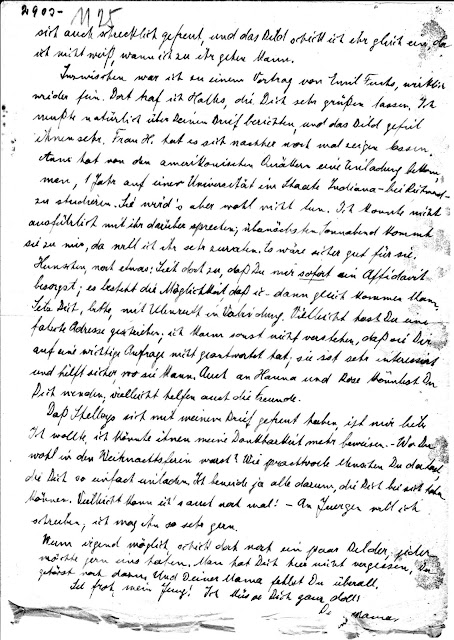 My boy, my very beloved Little One,

Just now your letter of October 29th finally arrived. I cried for joy to finally hear from you after almost 4 months. I had been terribly worried. And such good news! I am very happy for my boy. Hopefully you will get the job you are looking forward to, or perhaps you have it already. The picture is splendid. Such a sweet (dear) face, but a bit too serious. You show a noticeable resemblance with Walter in the picture, especially the expression.

Hunschenboy, it is great that you have such wonderful results. I am so happy about that. Hopefully you do not work too much! But you know yourself how to handle your life. You have to stay healthy and you have to accomplish much. It hurts me that you went through a difficult (troubled) time with Esther, but that can only make you stronger. Continue to have a good relationship, perhaps later on a real friendship develops. Both of you are valuable people and should not lose contact. It is a good sign Hunschenboy, that you always like nice girls and don't get involved in ugly love affairs. And I know that you will always be like that. Yes, my boy, you have changed in the picture, you are a grown boy, not the child anymore sitting on my lap. But still you are my little Hunschenboy, and always will be! I read your letter to Annchen right away over the telephone, even took the picture along, until I realized that I could not show it to her that way. She was very happy about it and I will send her the picture since I don't know when I will be able to go to her.

In the meantime, I went to a lecture about Emil Fuchs, really great. I met Halles there, they said to tell you hello. Naturally I had to report about your letter, and they liked the picture a lot. Mrs. H. had me show it to her again later on. Annie received an invitation from the American Quakers to study at a university in Indiana, by Richmond, for one year. She really does not want to do that, I think. I have not been able to talk to her in detail about it, Saturday after next she will come to see me, so then I will urge her to do it. Surely it would be good for her.

Hunschen, one more thing: try to get an affidavit right away, there seems to be a chance that I can come immediately. Please get into contact with Ellenruth. Maybe you wrote to the wrong address, otherwise I don't understand that she has not replied to such an important request. She is very interested and helps where ever she can. You can also contact Hanna and Rose, maybe the Friends also can help.

I am glad that Shelleys were happy about my letter. I wish I could prove my gratefulness much more. I wondered where you were for the Christmas holidays. What splendid (marvelous) people around you to just invite you like that. I envy all of them, who can be with you. Perhaps someday I can meet them. I will write to Jurgen, I like him a lot.

If possible send a few more pictures, everybody wants to have one. You have not been forgotten, you still belong with us. And your MAMA misses you just about everywhere.

Be happy, my boy! I kiss you much.
Your MAMA

Ella finally hears from her hunschenboy! She cried for joy. I love that she grabbed the letter and the picture when she went to the phone to call Annchen and read her the letter. Little did she know that two generations later, you can show a picture over the phone. The picture of Opa reminded Ella of her brother Walter, who died in the first Great War. That seems appropriate, as Opa's middle name was Walter. I wonder if that comforted Ella to see the resemblance.

Annchen is Opa's aunt (his father's sister), and I'm a little confused about where she lives. She's in Berlin, but it seems that it is not easy for Ella to get to her, as she calls and mails the picture instead of visiting. I don't know if Ella hesitated to go into non-jewish areas of the city, and that's why she didn't go to Annchen's? She seems to be able to move freely otherwise, and makes it to the Quaker Meeting House.

Ella said she went to the Quakers and heard a lecture about Emil Fuchs, and when I googled it to see if there was a famous one, this is what I got:

As you can see there are a handful of Emil Fuchs in Germany in the early 1900s. I had to figure out which one was most likely. The author (actually an artist) was a possibility, but he spent most of his time in the United States and England, so I wasn't sure. The baseball guy was born in Berlin but grew up in New York, so I eliminated him. Then I looked up the Political leader, who was a theologian involved in politics. He fit the bill, he joined the Quakers as a pacifist and wrote books on the relationship between communism and Christianity. His personal life had some tragedies in it, with two suicides (his wife in 1931 and daughter in 1939) and a son who was convicted of spying, giving atomic research secrets to the USSR. I wonder if he was giving the lecture or if the lecture was about him. Either way, he certainly is fascinating.

Ella does seem to be interested in the lecture, but I think she had the most fun showing the Halles' Opa's letter and picture. Ella found out Anni had an opportunity to study in the United States, and made plans to encourage her to do it.

Then Ella mentions an opportunity for her to get to the United States right away, and asks Opa to get in touch with Ellenruth about an affidavit. I'm pretty sure this was the original plan, for Ellenruth and her husband to provide a financial affidavit for Ella (**I learned from Ellenruth's daughter that Ellenruth's husband was a Russian emigre and that finances were difficult). I don't know if Opa didn't write to Ellenruth about it (he's seemed hesitant about her) or if Ellenruth hasn't gotten back to him. An affidavit is a big ordeal, so there's a chance her husband wasn't so keen on the idea, or that they were able to provide it. In addition, Ellenruth's parents (Martha and Erich) might need their support if their other travel plans don't work. I'm not sure how many affidavits one family is allowed to provide. Hanna and Rose are other distant relatives that live in America that are likely on the list of potential affidavits. More than one person could provide affidavits for refugees, sort of like a community of people who would ensure the refugee wasn't a financial burden on the US. The fact that Ella is no longer shy about asking any of these folks to provide an affidavit is telling of how scared she is and how urgently she feels she needs to leave Germany.

It makes me sad, because we know from this end of the lens that a quick and easy route to America is very suspicious and likely not possible. Ella asks if maybe the Quakers can help- I thought she was talking about the American Friends Service Committee (AFSC) who helped get Opa across. Instead, I think she might mean a Quaker group that could raise funds for her. The rest of the paragraph is in the context of affidavits, so this makes most sense. And I think Ella realizes that Opa is in touch with the AFSC about all the possible refugee routes. The AFSC didn't help financially, but rather connected refugees to the financial help and helped them navigate the ridiculous immigration system.

Opa must have spent Christmas with the Shelley's, who is a family in Kansas that allowed him to live (I think temporarily) with them, and work for them on their farm. He has grown connected to this family, because already in October they've invited him to stay for Christmas. Ella is so grateful. She is also jealous of the time they get to spend with her son.

I realized something just now. Ella is an empty-nester. It has been nearly two years since she has seen her son, which is of course unusual (as are the circumstances surrounding that long absence). But ultimately she would be without her children at this age either way. I wonder if the extreme loneliness and longing for her children comes from a foreboding sense that she may never see them again. It's one thing to say goodbye to your child with the knowledge that they will return home for the holidays or that she might be able to visit. But to say goodbye with no reunion plans, no date to look forward to, and the possibility that it will never come... that's frightening. I think she thinks about that.

**I updated this blog to correct the identity of Ellenruth's first husband, who was not an American as I said- but Russian.