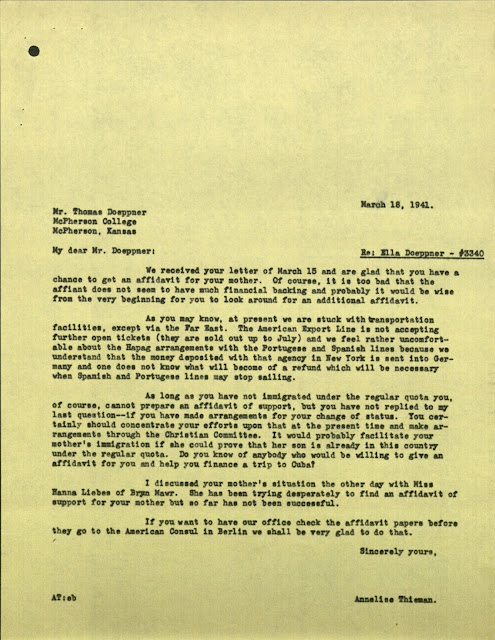 We received your letter of March 15 and are glad that you have a chance to get an affidavit for your mother. Of course, it is too bad that the affiant does not seem to have much financial backing and probably it would be wise from the very beginning for you to look around for an additional affidavit.

As you may know, at present we are stuck with transportation facilities, except via the Far East. The American Export Line is not accepting further open tickets (they are sold out up to July) and we feel rather uncomfortable about the Hapag arrangements with the Portugese and Spanish lines because we understand that the money deposited with that agency in New York is sent into Germany and one does not know what will become of a refund which will be necessary when Spanish and Portuguese lines may stop sailing.

As long as you have not immigrated under the regular quota you, of course, cannot prepare an affidavit of support, but you have not replied to my last question-- if you have made arrangements for your change of status. You certainly should concentrate your efforts upon that at the present time and make arrangements through the Christian Committee. It would probably facilitate your mother's immigration if she could prove that her son is already in this country under the regular quota. Do you know of anybody who would be willing to give an affidavit for you and help you finance a trip to Cuba?

I discussed your mother's situation the other day with Miss Hanna Liebes of Bryn Mawr. She has been trying desperately to find an affidavit of support for your mother but so far has not been successful.

If you want to have our office check the affidavit papers before they go to the American Consul in Berlin we shall be very glad to do that.

I'm so confused right now. I'm sure Opa was too. Before we get into that though- I love how Ms Thieman responded to Opa's letter to Ms Hanstein. She's basically saying- boy- we got you- and we know what we're doing here. In a nice way. She also calls him out on the visa thing, although I feel bad for Opa because he did sort of answer the question, and his answer is that he's tried but heard nothing. There is definitely some hold-up around the visa process for Opa and it seems the AFSC is also a bit confused. Either way, it seems that Opa's visa is pretty important in terms of his own ability to stay in the US, and his hope to bring his mother over.

The part that concerned me about this letter is Ms. Thieman's dreary picture of how Ella can physically get to the United States. It seems that even if the affidavits worked out, getting passage on a ship is not as easy as simply standing in line and purchasing a ticket. Currently the ships are sold out through July, and it appears that there is very little hope of multiple ships sailing past that point. The number of passenger ships crossing the Atlantic is dramatically decreasing as the war in Europe continues to ramp up. German u-boats have already made travel precarious, even for civilian ships. I took a quick glimpse to see some of the numbers, and it appears that passenger ships were targeted as early at 1939 by the U-boats, and by 1941, Germany had no qualms attempting to sink the liners.

Ms. Thieman praises Opa for the affidavit he obtained from the Shelley's, then almost immediately dashes his hopes saying it'll likely not be good enough and he needs more.

I found her discussion about the Hapag arrangement with the Spanish and Portuguese passenger lines to be really interesting. It looks like Spain and Portugal have ships that are still leaving Europe, and I think many from Lisbon (where Ella has mentioned leaving from). The problem with this is that it seems the passenger ships are financially backed or run by Germany. Regardless by the fact that it seems wrong to give money to Germany to flee it, the money given for passage will likely be un-refundable in the very likely case that the ships will stop sailing soon. The whole thing is just depressing. I know that there is more information about this whole process, and there are legends about many of these ships- some heroic and beautiful (a ship full of refugees make it to freedom) and others tragic (a ship full of refugees gets turned around at port). It seems that at this point, Ms. Thieman is advising that Opa wait to give any money for passage, because it is likely it won't be used and won't be refunded. That sounds pretty unhopeful- when the letters just before didn't seem to have the same tone. It's confusing. Is there hope or not?

Then Ms. Theiman talked about Cuba, I thought that line was lifted from another letter or something. What on earth does Opa need an affidavit and trip to Cuba for?! I'm probably missing something, but I'm guessing she's encouraging Opa to get another affidavit for his mother and to try to finance a trip to Cuba rather than from Lisbon to the US like his mother has been talking about.

After reading this letter a dozen times, as I'm sure Opa did, I'm not sure whether to hope or not. At the very least, perhaps Opa has contacted the Christian organization in New York.