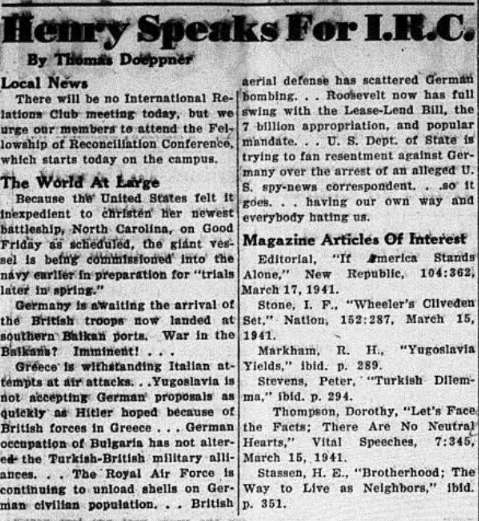 There will be no International Relations Club meeting today, but we urge our members to attend the Fellowship of Reconciliation Conference, which starts today on the campus.

Because the United States felt it inexpedient to christen her newest battleship, North Carolina, on Good Friday as scheduled, the giant vessel is being commissioned into the navy earlier in preparation for "trials later in spring."

Germany is awaiting the arrival of the British troops now landed at southern Balkan ports. War in the Balkans? Imminent! . . .

Greece is withstanding Italian attempts at air attacks...Yugoslavia is not accepting German proposals as quickly as Hitler hoped because of British forces in Greece... German occupation of Bulgaria has not altered the Turkish-British military alliances... The Royal Air Force is continuing to unload shells on German civilian population... British aerial defense has scattered German bombing... Roosevelt now has full swing with the Lease-Lend Bill, the 7 billion appropriation, and popular mandate... U.S. Dept of State is trying to fan resentment against Germany over the arrest of an alleged U.S. spy-news correspondent... so it goes... having our own way and everybody hating us.

I'm honestly not sure what Opa meant when he said "having our own way and everybody hating us." But the spirit of this article is very much that things are just falling apart. I read that piece about Britain bombing German civilian populations and cringed. I know that the Geneva Convention and the treaties that resulted were instrumental in establishing that civilian casualties were to be avoided. I'm not sure if anything like that had been established before this war. If you know about this, please comment and educate me! I think it is horrifying that civilian casualties was an accepted norm.

How could Opa not be thinking about his family all the time? At any point any or all of them could be killed for any reason. Opa as I knew him was not a worry-wart, but I can't imagine that he didn't pore over the news with some sense of dread. In the Harry Potter book series, there is a time when the villain, Voldemort, is growing in power and might. Ron, one of the main characters, sits listening to the radio day and night to hear if his family members become one of the listed people missing or killed. Did Opa wonder if he hadn't heard from his family for a while if perhaps it wasn't just the delayed mail?

I don't know what he meant when he said "everybody hating us"- my guess is he was talking about the US. But in a way I think he meant everyone hating everyone- the world was spinning into a chaotic mess of war with very little to be hopeful for. The conference of the Fellowship for Reconciliation must have felt desperately needed and perhaps a day late and a dollar short.
Posted by Sarah Snow at Tuesday, September 27, 2016