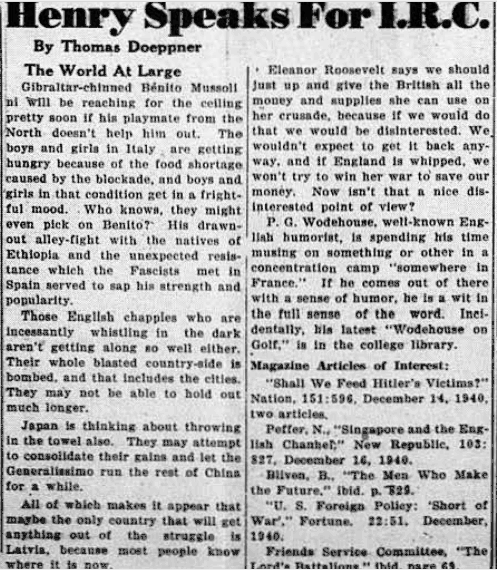 Gibraltar-chinned Benito Mussolini will be reaching for the ceiling pretty soon if his playmate from the North doesn't help him out. The boys and girls in Italy are getting hungry because of food shortage caused by the blockade, and boys and girls in that condition get in a frightful mood. Who knows, they might even pick on Benito? His drawn-out alley-fight with the natives of Ethiopia and the unexpected resistance which the Fascists met in Spain served to sap his strength and popularity.

Those English chaise who are incessantly whistling in the dark aren't getting along so well either. Their whole blasted country-side is bombed, and that includes the cities. They may not be able to hold out much longer.

Japan is thinking about throwing in the towel also. They may attempt to consolidate their gains and let the Generalissimo run the rest of China for a while.

All of which makes it appear that maybe the only country that will get  anything out of the struggle is Latvia, because most people know where it is now.

Eleanor Roosevelt says we should just up and give the British all the money and supplies she can use on her crusade, because if we would do that we would be disinterested. We wouldn't expect to get it back anyway, and if England is whipped, we won't try to win her war to save our money. Now isn't that a nice disinterested point of view?

P.G. Wodehouse well-known English humorist, is spending his time musing on something or other in a concentration camp "somewhere in France." If he comes out of there with a sense of humor, he is a wit in the full sense of the word. Incidentally, his latest "Wodehouse on Golf," is in the college library.

There's something different about Opa's tone in this article. I can't tell for sure, but it seems he has to laugh to keep from crying. For these articles he distances himself from the European scene, not mentioning that his mother is surrounded by Nazis in Berlin and his father and sister are hiding in occupied countries. He sounds very... American.

He writes this article with a sense of sardonic humor. In fact at first I was a little offended by the comments he made about the hungry boys and girls in Italy. I thought it was odd he would make light of food shortages in Italy, especially when he knew his uncle was interned there. But then he said that they might even pick on Benito... and that's when I felt his tone. A vicious snark, angry at the leaders who would march their countries into this fiasco.

I have to remember that at this point in time, Opa is still closely tied to his Quaker roots, he is struggling with his pacifist ideals when faced with the war that is raging. He pokes fun at Eleanor Roosevelt who seems to be in favor of funding Britain's endeavors without sending US troops. Opa's opinion on that strategy is clearly not approving. He knows that money sent is strings attached and that the US cannot support a war effort without being in the war. Which eventually did happen, but not without provocation.

This article actually helped me understand a bit more about why the United States held out for so long in joining the conflict. I think they really were trying to wait it out, hoping that their monetary support would hold the allies over to victory. Why would you get yourself involved in a war without obvious cause? I get it. I am sure I'll learn more as I go on in here, but I still cannot understand why Japan thought it smart to attack Pearl Harbor- knowing that would wake the giant. Unless they knew the US would inevitably join the war and felt it necessary to sneak in an attack before they were on highest alert. No idea. But that's in the future, back to the article.

The mention of the English humorist made me want to find out more about this man. He was interned in Italy, as they did for any adult man up to 60 years that were of enemy citizenship. After being shuttled around to various camps, he was released at the age of sixty, one year after he was first interned. He landed in Berlin where he recorded comedy shows over the German radio, an act that many would not forgive him. He eventually landed in the United States and had a prolific writing career. So it seems that he did have a real wit. You can read more about the details I learned from this wikipedia page, or look deeper. He's an interesting guy!

This article reminds me that war is not as cut and dry as when we learn about them in hindsight. Details fade away from our general education. And I imagine most folks who are not history buffs were not aware of Latvia's role in the conflict. It truly was a world war. May we never see that again.
Posted by Sarah Snow at Thursday, September 08, 2016