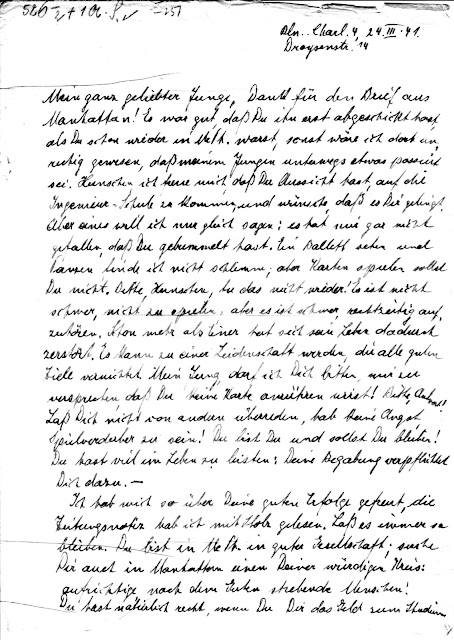 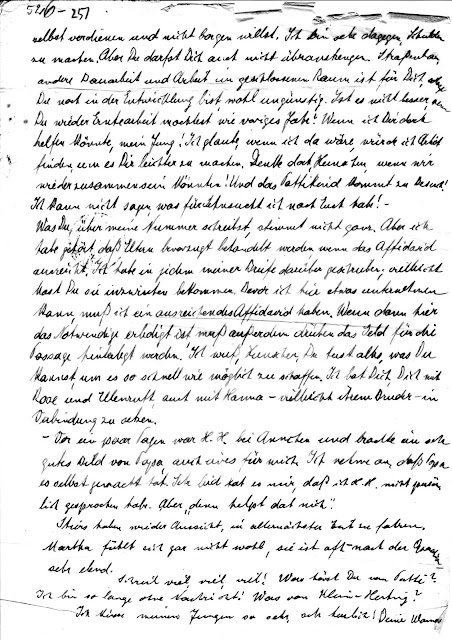 Thank you for your letter from Manhattan. It was good, that you mailed it after you were back at McPherson, otherwise I would have been worried that something could happen to my boy, while on the way. Hunschen, I am happy that you have an opportunity to go to the Engineer school, and wish for you that it comes true. But one thing I will say right away: I did not like it at all that you dawdled (got lazy). To see a ballet and do some dancing, I think is not bad, but playing cards you should not. Please Hunschen don't do that again. It is not hard to play, but it is difficult to stop in time. So many have wrecked their life with that. It can develop into a bad passion, which can destroy all goals. My boy, may I beg you, to promise me that you won't touch any cards? Please answer. Don't let others convince you, don't be afraid to be a spoilsport. You are you and should remain so. You have to accomplish a lot in life. You have that obligation because of your talent.

I was so happy about your good results, I read the newspaper note full of pride. Let it always be like that (keep up the good work). In McPherson you are in good company, look for a worthy group in Manhattan as well, honest people striving for the good. Naturally you are correct, wanting to earn the money for your studies yourself, and not borrow it. I am very much against creating debts. But you should not overexert yourself.  Roadwork, construction, or work in closed rooms is not good for you, as long as you are still developing. Wouldn't it be better to do harvesting work like last year? If only I could help you, my boy. I think if I were there I would find work, to make it easier for you. Just think, Hunschen, if we could be together again. And then Patti would come for a visit. I cannot explain (put into words) how terribly hard I am longing for both of you.

What you write about my number is not quite correct. But I have heard that parents are given preference, if the affidavit is sufficient. I wrote about it in each of my letters, maybe you have received them in the meantime. Before I can initiate anything from here, I have to have the sufficient affidavit. Then when everything required here is done, the money for the passage also has to be deposited over there. I know, Hunschen, you are doing everything you can to make it happen. I had asked you to contact Rose and Ellenruth, also Hannah and maybe her brother.

A few days ago H.H. came to see Ann'chen and brought a very good picture of Papa, one for me too. I assume Papa took it himself. But I regret not to have spoken to H.H. myself. (the next line is Dutch, meaning as much as : one can't change that)

Stiers again are having a good chance to leave soon. Martha is not feeling well, now after the operation, she often is very weak (quite ill).

Write a lot, a lot, a lot! What do you hear from Patti? I have been without news from her for a long time. What about Little Herting?

I kiss my boy very much and lovingly!
Your Mama


Ella has very high expectations for her son, and understandably so. He is smart, capable, and has the luxury of freedom. She does not want anything getting in the way of that. While it may seem harsh for her to ask him not to play cards, we have to get the perspective that she has. There is so much at stake here for him, and Ella has seen poor men in Germany throw away their already fragile livelihood and families for drink, gambling, or other vices. I have been reading some of my Quaker books and pamphlets about this time period, and something I came across emphasized Ella's point here. It's from Anni Halle's Pamphlet titled "Thoughts are Free" A Quaker Youth Group in Nazi Germany. She wrote about her experience in the Quaker youth group (that Opa was also a member of) ...

It seems a little exaggerated to me today, and understandable only as a sign of the times, how the older Quakers influenced our judgment concerning smoking and alcohol. We renounced both radically and wished to stay clear of any addictive habits. But, above all, we wanted to speak to the conditions prevailing among the working class, such as the case, for example, where a father was destroying his health and, in one evening, drinking up the week's wages meant for the family. Several other demands that we placed on ourselves would perhaps appear to a youth group today as "repressive": order, cleanliness, punctuality. For us, these were not "Prussian virtues," values in themselves, but rather necessary prerequisites for a productive community life. To our good fortune, we did not know as yet how important for survival such firmly engrained self-discipline could be for some of us later, in the underground or in emigration.

I'm really struck by this. I think a natural pendulum swing of a person's life can be seen as the early years of being taught strict rules, the adolescent years of rebelling against them, and the swing toward the middle as one ages and finds the benefit of some of those rules. But for the Quakers, and for people like Opa and Ella- they didn't have the luxury of the rebellious teenage years. You absolutely had no room to fall. The stakes were so very high.

I find as I age that the things I used to hold on to with strict adherence no longer hold the same tight chokehold on me, but I've chosen many boundaries for myself because I am a healthier, happier person with them, and I can be better for my community. But I had to learn that, and in some ways I learned it by doing the wrong things. The pressure that Opa must feel to never misstep must be so incredible.

Ella reminds Opa that her number hasn't been called (or isn't forecast to be called soon)- rather she has heard that parents of children in the US get preference. She has listed the steps for her emigration many times to Opa, and I found a source to back up her litany. A man named Leonard Kenworthy from the United States was on mission to the Berlin Quaker group in 1940-1941. He was helping the Quaker center with their refugee work among other things. Here is a snippet of what he said in his book "Another Dimension of the Holocaust: An American Quaker Inside Nazi Germany" about the process of emigration at that time:

First, a person's passport had to be validated...Emigrants also had to obtain a certificate of residence and one of good conduct. In addition, each person leaving the country had to obtain several tax papers and affidavits about his or her personal belongs and a certificate that all taxes had been paid. Those papers had to be taken to several government offices. When all those steps ad been taken, the emigrant was required to take his or her papers to a special bureau which examined the person's belongings and indicated what could be moved abroad. Having cleared that series of hurdles, the emigrant then had to appear at the consulate of the country to which he or she was going, producing a steamship or airplane ticket, plus other documents...

It makes me realize what Ella has likely already been through and why she is in such a hurry to get the rest. At this time, the Nazis were still happy to let the Jews leave the country and encouraged them to do so, but not without making sure they had paid all their debts! Nazi Germany did not want the Jews to take any money out of the country, which is how most successful immigrants arrived in their new home with barely any money.

H.H. comes to visit and brings Ella a picture of August. I don't know yet who H.H. is, but I'll try to figure it out. I'm assuming it is someone from August's side of the family. I think it is a little ridiculous that Ella even accepts this picture of August. He refuses to write her, is no longer married to her, and he sends a picture of himself. I don't get it.

The Stiers are still on the roller coaster of emigration themselves, though they have seemed closer to actually leaving, they haven't left yet and it seems that Martha just had surgery. (A reminder: Martha is Ella's sister.)

I gave you a lot of research for this blog- but I do find it so helpful to hear the different voices all interacting and producing similar refrains. It leads credence to the individual stories, and gives me a bigger picture of what is going on.

In the meantime - I've been thinking about my vices, and if there's anything keeping me from reaching my full potential. Ella made me think!