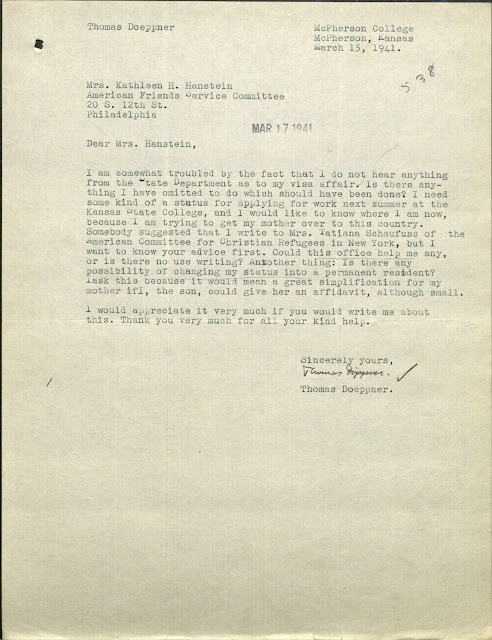 I am somewhat troubled by the fact that I do not hear anything from the State Department as to my visa affair. Is there anything I have omitted to do which should have been done? I need some kind of a status for applying for work next summer at the Kansas State College, and I would like to know where I am now, because I am trying to get my mother over to this country.

Somebody suggested that I write to Mrs. Tatiana Schaufuss of the American Committee for Christian Refugees in New York, but I want to know your advice first. Could this office help me any, or is there no use writing? Another thing: Is there any possibility of changing my status into a permanent resident? I ask this because it would mean a great simplification for my mother if I, the son, could give her an affidavit, although small.

I would appreciate it very much if you would write me about this. Thank you very much for all your kind help.

I hate to break it to you Opa, but I'm pretty sure that Anita Thieman, whose suggestion to contact Ms Schaufuss you just questioned, is sitting in the same room as Mrs. Hanstein. I could be wrong, but I'm fairly sure the folks at the AFSC communicate with each other.

Opa has been trusting from the beginning of AFSC's advice and suggestions. I think this letter shows us just how concerned he is about his own visa status, and his mother's immigration. Now that her immigration is a real possibility, his visa is a bit more important. The "no news is good news" adage is not comforting Opa at the moment. He is confused why the State Department, who essentially gave him a heads up on his deportation, is now silent.

I think Opa is also confused as to why the folks at the AFSC aren't also more concerned. Why are they sending him to some lady in New York? Are they done with him and his mother? Opa isn't ready to trust just anyone right now. On the outside, Opa doesn't have access to the constant exchange of information and referrals that goes on among many of the different agencies that were working hard to help refugees. All he knows is, he is currently without a visa, and he needs that visa for nearly everything else: a job, transfer to the engineering school, and the smallest hope for his mother.

Opa starts this letter by stating he is "somewhat troubled," but I think he is more than somewhat- he's straight up troubled. And he wants his regular advisor to tell him what to do.