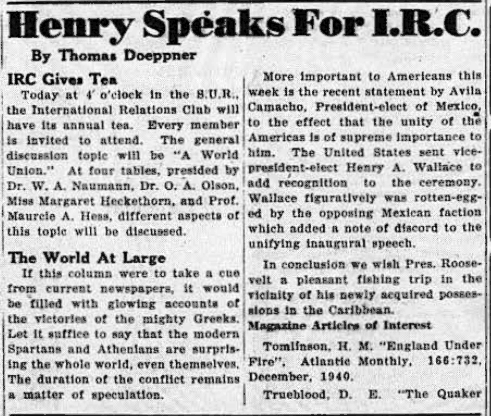 Today at 4 o'clock in the S.U.R., the International Relations Club will have its annual tea. Every member is invited to attend. The general discussion topic will be "A World Union." At four tables, presided by Dr. W. A. Naumann, Dr. O.A. Olson, Miss Margaret Heckethorn, and Prof. Maurice A. Hess, different aspects of this topic will be discussed.

If this column were to take a cue from current newspapers, it would be filled with glowing accounts of the victories of the mighty Greeks. Let it suffice to say that the modern Spartans and Athenians are surprising the whole world, even themselves. The duration of the conflict remains a matter of speculation.

More important to Americans this week is the recent statement by Avia Camacho, President-elect of Mexico, to the effect that the unity of the Americas is of supreme importance to him. The United States sent vice-president-elect Henry A. Wallace to add recognition to the ceremony. Wallace figuratively was rotten-egged by the opposing Mexican faction which added a note of discord to the unifying inaugural speech.

In conclusion we wish President Roosevelt a pleasant fishing trip in the vicinity of his newly acquired possessions in the Caribbean.

Again, apologies for the missing sections. This article is a spunky one. I think Opa was trying to poke fun at Roosevelt but I don't know the history well enough to know for sure. I find it fascinating that the Mexican president talks about the unity of the Americas- I think now the United States of America is very myopic and considers themselves the only and important part of America. To think that there is a whole land mass attached to us that we largely ignore or denigrate, is odd at best.

I also was struck by the mention of the fighting Greeks and how our quick sweep of history tells us only the big details and major players, we don't hear about the little victories that pave the paths for the big ones. I know that's inevitable in a comprehensive history course, but it heightens my awareness that there is so much I don't know.

The tea with focused discussion by professors and scholars sounds awesome. Again, I miss school. I'm a nerd.

I love the recommended article section- it's cut off, but it reminds me of the articles my dear friends share with me, some fun but many incredibly insightful and mind-opening. It encourages me that even though we might have an epidemic of false news, we still have the habit of sharing information. If we can sharpen our skills of discernment and work towards holding our information highways accountable, we at least have intact the desire to share information. That's a good start.