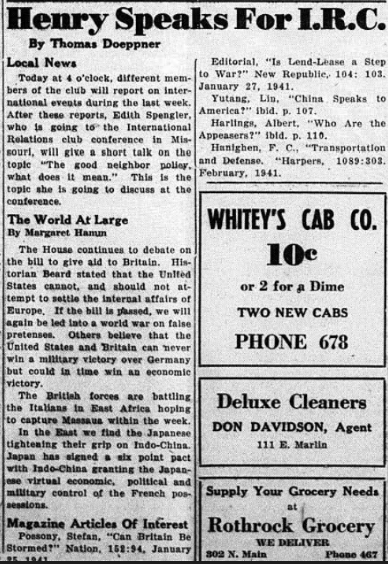 Today at 4 o'clock, different members of the club will report on international events during the last week. After these reports, Edith Spangler, who is going to the International Relations Club conference in Missouri, will give a short talk on the topic  "The good neighbor policy, what does it mean." This is the topic she is going to discuss at the conference.

The World At Large
By Margaret Hamm

The House continues to debate on the bill to give aid to Britain. Historian Beard stated that the United States cannot, and should not attempt to settle the internal affairs of Europe. If the bill is passed, we will again be led into a world war on false pretenses. Others believe that the United States and Britain can never win a military victory over Germany but could in time win an economic victory.

The British forces are battling the Italians in East Africa hoping to capture Massaua within the week.

In the East we find the Japanese tightening their grip on Indo-China. Japan has signed a six point pact with Indo-China granting the Japanese virtual economic, political and military control of the French possessions.

This article reminded me, through the voice of the historian Beard, that Americans had in their very recent memory a massive world war that felt, at best, was entered with shaky facts. The Americans were hesitant to join another war because the last one had cost so much and with very little to show for it.

I'm also reminded of how formidable Germany's army felt. Opa once told me that there were times when he really thought that Germany could win. He always would transition into how glad he was that they did not. But I wonder how he felt in the midst of that feeling the possibility that his country could remain in the choke-hold of Nazism for the long-haul. Certainly he would have known that meant all of his friends and family would be lost. How out of control and helpless he must have felt.

The idea that kept America invested in the events in Europe was that it needed to be a "good neighbor" in order to live up to its influence in the world. The question that Americans were asking during this time (not much unlike the Pharisee who asked Jesus): "what is a good neighbor?"
Posted by Sarah Snow at Thursday, September 15, 2016