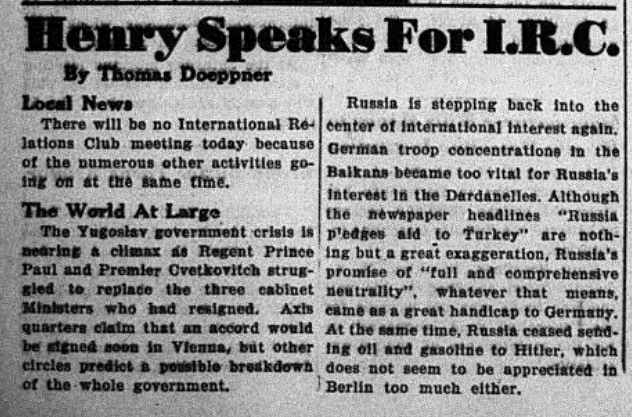 There will be no International Relations Club meeting today because of the numerous other activities going on at the same time.

The Yugoslav government crisis is nearing a climax as Regent Prince Paul and Premier Cvetkovitch struggle to replace the three cabinet Ministers who had resigned. Axis quarters claim that an accord would be signed in Vienna, but other circles predict a possible breakdown of the whole government.

Russia is stepping back into the center of international interest again. German troop concentrations in the Balkans became too vital for Russia's interest in the Dardanelles. Although the newspaper headlines "Russia pledges aid to Turkey" are nothing but a great exaggeration, Russia's promise of "full and comprehensive neutrality", whatever that means, came as a great handicap to Germany. At the same time, Russia ceased sending oil and gasoline to Hitler, which does not seem to be appreciated in Berlin too much either.

You know, Russia has always done its own thing. I'm fascinated by Russian history. The Russian people seemed to be made of steel, and yet they tend to lose so much at every historical turn. They survive the most terrible things.

Last night I spoke with a man from Turkey who talked about how Hitler did not invade their country in order to access Russia from the south, but instead went north. He had his own reasons why this happened, but talked about how the people of his country considered themselves blessed for this near-miss of catastrophe. We both giggled a little bit when we recognized that each of us knew how smart a northern advance on Russia is (um- not smart). Looking into some historical sites and arguments on why Hitler let Turkey alone- there are several reasons cited. Among those are that Turkey was not an imminent threat, and its geography was too mountainous to traverse easily and quickly. So Hitler eventually got to Russia in the north, and through the tough-as-nails Russian tactic of scorched-earth policy, was forced to retreat. (We'll get to this later I'm sure, but Russians simply retreated into their frozen homes and burned all the villages on the borders so that the incoming had no food or resources to pillage and were forced to go back for supplies. That's a hard-core plan, and it worked.)

Anyway, I'm getting ahead of myself but it's interesting to note that even in hindsight, we can't know for sure why all the choices were made and how different choices may or may not have affected the final outcome. Turkey's benevolent neutrality seemed to be enough to spare it from battle, and there is a man in Virginia who is thankful for that small break in history from chaos.