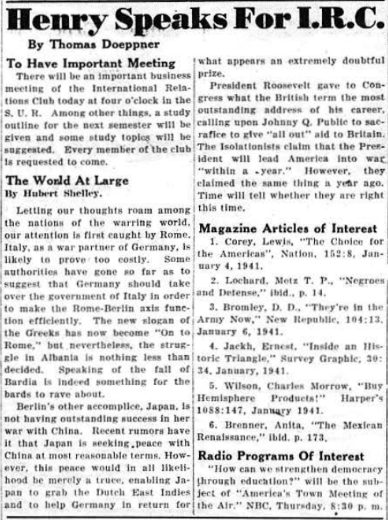 To Have Important Meeting

There will be an important business meeting of the International Relations Club today at four o'clock in the S.U.R. Among other things, a study routine for the next semester will be given and some study topics will be suggested. Every member of the club is requested to come.

The World at Large
By Hubert Shelley.

Letting our thoughts roam among the nations of the warring world, our attention is first caught by Rome. Italy, as a war partner of Germany, is likely to prove too costly. Some authorities have gone so far as to suggest that Germany should take over the government of Italy in order to make the Rome-Berlin axis function efficiently. The new slogan of the Greeks has now become "On to Rome," but nevertheless, the struggle in Albania is nothing less than decided. Speaking of the fall of Bardia is indeed something for the bards to rave about.

Berlin's other accomplice, Japan, is not having outstanding success in her war with China. Recent rumors have it that Japan is seeking peace with China at most reasonable terms. However, this peace would in all likelihood be merely a truce, enabling Japan to grab the Dutch East Indies and to help Germany in return for what appears an extremely doubtful prize.

President Roosevelt gave to Congress what the British term the most outstanding address of his career, calling upon Johnny Q. Public to sacrifice to give "all out" aid to Britain. The Isolationists claim that the President will lead American into war "within a year." However, they claimed the same thing a year ago. Time will tell whether they are right this time.

"How can we strengthen democracy through education?" will be the subject of "America's Town Meeting of the Air," NBC, Thursday, 8:30 p.m.

I tell you what, I bet everyone was learning their geography left and right in America trying to keep up with the news! I know I had never heard of Bardia before this. Bardia is a mediterranean seaport that has seen a lot of action. It's a good spot to have control over considering it's right there on the coast of present-day Libya, almost to the border of Egypt. Anyone wanting to sail the waters under Europe and restock supplies at port would be happy to have Bardia. So there ya go, the Allies had it (for a bit, before they lost it and then got it back again).

The Isolationists- that term I do remember from history lessons, and even in politics growing up. I was taught that these folks were happy to stay out of any conflict outside our borders. Americans have the lucky chance of two oceans bordering two sides of our nation, a large and natural buffer between us and Europe and Asia. These isolationists did not favor Roosevelt's plea to invest fully in aiding Great Britain in the war, as they predicted that where the money went, the soldiers would soon follow. They were right about that. This article was written in January 1941 and by the end of the year the United States was at war. It was likely longer than even the Isolationists expected the US to wait to enter.

I love the magazine article of interest section. I wonder where they gathered those resources? Who recommended them? I love that social media allows me to seek out resources and information that is outside of my current experiences and expertise.

So today I encourage you to ask your friends who don't look or think exactly like you- to recommend a book or article that they found compelling. You may be surprised what you learn. That last radio show sounds interesting- "how to strengthen democracy with education"... I'm working to make sure my sons are learning from school and home what real democracy looks like.