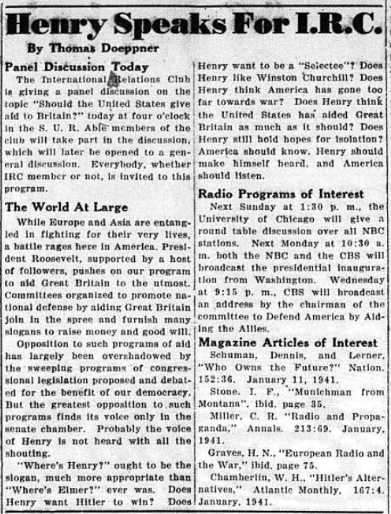 Article in the Spectator by Opa for the International Relations Club

The International Relations Club is giving a panel discussion on the topic "Should the United States give aid to Britain?" today at four o'clock in the S.U.R. Able members of the club will take part in the discussion, which will later be opened to a general discussion. Everybody, whether IRC member or not, is invited to this program.

While Europe and Asia are entangled in fighting for their very lives, a battle rages here in America. President Roosevelt, supported by a host of followers, pushes on our program to aid Great Britain to the utmost. Committees organized to promote national defense by adding Great Britain join in the spree and furnish many slogans to raise money and good will.

Next Sunday at 1:30 p. m., the University of Chicago will give a round table discussion over all NBC stations. Next Monday at 10:30 a. m. both the NBC and the CBS will broadcast the presidential Inauguration from Washington. Wednesday at 9:15 p. m., CBS will broadcast an address by the chairman of the committee to Defend America by Aiding the Allies.

It is eerie to read real time debates about whether or not America will enter World War 2. I don't know what would have happened if they didn't, or if they waited longer or started earlier. These are honestly worthless questions. If you start the what-if game, you have to be willing to ask that of every variable on back through till the beginning of time. That's impossible and impractical for us. So I watch the history unfold inevitably, and it reminds me that our decisions have impact. We may not know exactly what that impact might be, or how it will trickle down the years, but our decisions are powerful.

Opa reminds his readers that they are every man or woman- and the name Henry he uses to represent them. What does Henry think about all of this discussion in DC? Henry needs to speak and speak clearly. Opa does not tell his readers what to think and say, but merely to speak. Opa remembers finagling the radios so that he and his sister could listen to "illegal" outside programs that would tell them something other than propaganda. He remembers when Hitler claimed ultimate power, that the schools shut down for three months and reopened with brand new curriculum and textbooks, whitewashed and infused with blind patriotism, racism, and hate.

Opa remembers. So he tells his readers: speak.