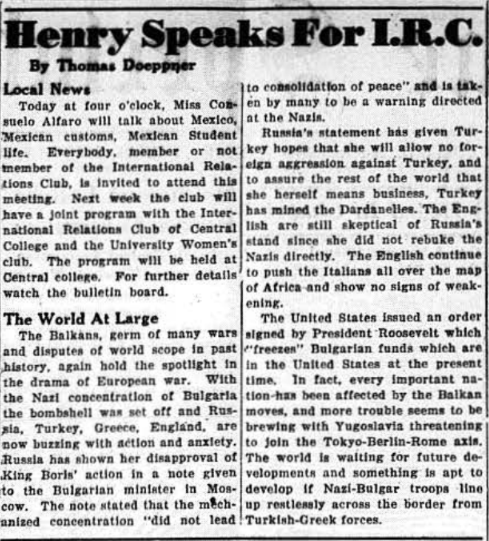 Today at four o'clock, Miss Consuelo Alfaro will talk about Mexico, Mexican customs, Mexican student life. Everybody, member or not member of the International Relations Club, is invited to attend this meeting. Next week the club will have a joint program with the International Relations Club of Central College and the University Women's club. The program will be held at Central college. For further details watch the bulletin board.

The Balkans, germ of many wars and disputes of world scope in past history, again hold the spotlight in the drama of European war. With the Nazi concentration of Bulgaria the bombshell was set off and Russia, Turkey, Greece, England, are now buzzing with action and anxiety. Russia has shown her disapproval of King Boris' action in a note given to the Bulgarian minister in Moscow. The note stated that the mechanized concentration "did not lead to consolidation of peace" and is taken by many to be a warning directed at the Nazis.

Russia's statement has given Turkey hopes that she will allow no foreign aggression against Turkey, and to assure the rest of the world that she herself means business. Turkey has mined the Dardanelles. The English are still skeptical of Russia's stand since she did not rebuke the Nazis directly. The English continue to push the Italians all over the map of Africa and show no signs of weakening.

The United States issued an order signed by President Roosevelt which "freezes" Bulgarian funds which are in the United States at the present time. In fact, every important nation has been affected by the Balkan moves, and more trouble seems to be brewing with Yugoslavia threatening to join the Tokyo-Berlin-Rome axis. The world is waiting for future developments and something is apt to develop if Nazi-Bulgar troops line up restlessly across the border from Turkish-Greek forces.

I love that the International Relations Club hosts discussions and speakers from other countries. They are so good to keep the conversations going, to keep the voices fresh and new. I need to be more proactive in my own life so seek out those fresh voices. I have started a book club at my church that seeks to read books that have different voices than we are used to reading. I need to look into the local university's lecture series and see what is out there. I'm going to do that as soon as I publish this blog.

A phrase I heard when I was in history classes as a high schooler was that the Balkans were the powder keg of the world. Here is Opa saying the same thing:

The Balkans, germ of many wars and disputes of world scope in past history, again hold the spotlight in the drama of European war.

This makes me appreciate that some of my history teachers were trying to teach me. I wish I had listened better!
Posted by Sarah Snow at Friday, September 23, 2016