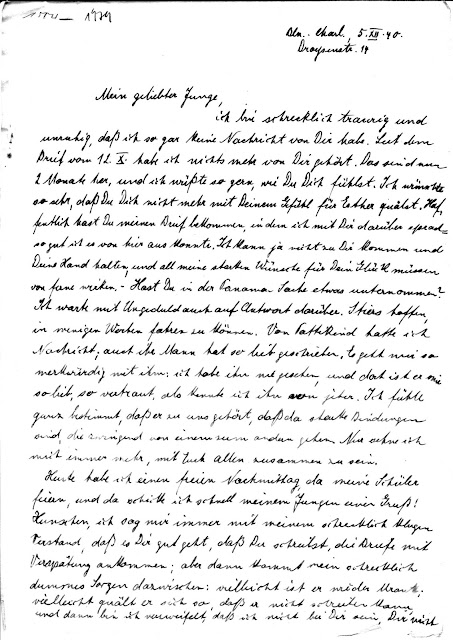 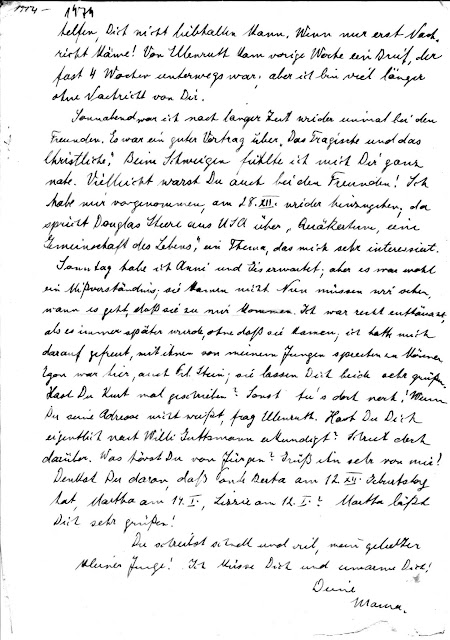 My dear boy,
I am terribly sad and worried that I haven’t gotten any news from you. Since the letter from October 12 I haven’t heard any more from you. That’s two months ago now, and I would so like to know how you are feeling. I wish so much that you wouldn’t torment yourself with your feelings for Esther anymore. Hopefully you got my letter where I talked to you about that, as well as I can from here. I can’t come to you and hold your hand, and all my fervent wishes for your happiness have to take effect from afar. Have you tried something on the Panama thing? I also impatiently await an answer to that. The Stiers hope to be able to travel in a few weeks. I got news from Patty child; her husband wrote so sweetly too. It’s so remarkable to me, with him; I’ve never seen him, and yet he’s so dear to me, so trusted, as if I’d known him for years. I feel very certain that he belongs to us, that there are strong connections there, that go directly from each of us to the other. Now I long even more to be together with all of you.
Today I have the afternoon free, since my students are on break, and so I’m sending my boy a quick greeting! Hunschen, I always say to myself with my terribly clever reason that things are going well for you, that you are writing, that the letters will come late; but then my terribly dumb worrying gets in the way: maybe he’s sick again; maybe he’s tormenting himself so much that he can’t write, and then I despair that I’m not with you, can’t help you, can’t hold you close. If only some news would come! A letter came a few weeks ago from Ellenruth, who was almost four weeks underway; but I’ve gone much longer without news from you.
Sunday evening I was, for the first time in a while, with the Quakers again. It was a good lecture on “The Tragic and the Christian.”  In the silence I felt like you were quite close by. Maybe you were also with the Quakers! I’m planning to go again on December 28; Douglas Steere from the USA is speaking on “Quakerdom: A Community of Life,” a topic that interests me greatly.
Sunday I was expecting Anni and Gis, but it was all a misunderstanding; they didn’t show up. Now we have to see when it will work for them to come to me. I was really disappointed, as it got later and later and they didn’t come; I had been looking forward to being able to speak to them about my boy. Egan(?) was here, also Fräulein Hein; they both send their greetings. Have you written to Kurt? If not, do so already! If you don’t have his address, ask Ellenruth. Have you inquired about Willi Guttsmann? Write to me about it. What have you heard from Jürgen?  Tell him hello for me!
Have you thought about the fact that Aunt Berta has a birthday on December 12, Martha on January 14, and Lizzie on January 12?  Martha sends her greetings!
Write soon and a lot, my beloved little boy!  Kisses and hugs!
Yours,

Ella takes advantage of an open afternoon to write to her son. She hasn't heard from Opa in almost two months, and she uses this fabulous phrase that all parents can identify with: "terribly clever reason...terribly dumb worrying." She knows intellectually that Opa's letter are likely delayed in the mail or censor. But she worries that Opa is in a ditch with pneumonia. I cannot imagine have that much time to let your imagination worry before you hear of any news. She is desperate for something, anything, just to be sure he is alright.

I love that Ella still has space amidst her worry to counsel Opa about girls- this time someone named Esther. I swear- Opa fell in love with every girl he met! I think the shock of going from an all-boys school to an American college was a little more than he expected in the girl department!

Ella asks Opa about the "Panama thing" which is another route from Europe into the United States (or really- just out of Germany). I actually had a friend post pictures online of her recent trip to Panama, and I realized that the United States had a military outpost at the Panama Canal. I need to do more research into how many refugees came through this way. After a short glance at the Holocaust Museum website, it appears that Panama was a place that accepted Jewish refugees during and after the war. For all Jews and other "unwanted" residents of Germany and the lands under Nazi control- there was a flurry of activity to get people out any way they could. Many of these escape routes were valid, some were fraudulent. Word of mouth, success stories, and refugee agencies were the only way to authenticate whether these avenues were worth whatever fee was nearly always required. There was no Snopes website to check. Honestly, I'm sure even without all the background checking, people were desperate enough to follow whatever path in hopes that they had found the unexpected loophole out.

Ella's sister Martha and her husband Erich were expecting to travel soon on one of these escape routes (Shanghai I believe). However, Ella wasn't going with them.

I love how Ella talks about Patti's husband, Maurice. She loves him as her own, fully trusting Patti and clearly connecting to whatever he wrote in his letters. She said he "belongs to us." Beautiful language.

Ella spent some time with the Quakers, and "in the silence, you were close by." That silence connected her to Opa across the ocean, and she imagine he might have been with the Quakers at the same time. Ella is a deeply feeling person- who employs her entire body and soul into remembering and embracing her children who are so far away.

Opa's good friends, Anni and Gis Halle, sisters from the Quaker youth group, missed their visit with Ella. I love that they plan visits with Ella. They are so good to her. You can tell that Ella surrounds herself with people to keep herself sane, and to feel connected to her children. Another thought that occurred to me is that she also might have done this as sort of a buffer against the Nazis. If she had non-Jews continually visiting and corresponding with her, then she was less isolated and perhaps a less easy target to ship out. It's good reasoning on her part if that crossed her mind.

Then Ella, after not hearing from Opa since October, gives him a laundry list of folks to look into or write- to include birthday wishes. Ha. I just love it. You can ignore your mother for a bit, but you really should write Aunt Martha a birthday card! She asks Opa to write Kurt, who is her little brother that is in Italy hiding from the Nazis.

This letter is a typical letter from Ella with girl advice, sadness and waiting to hear from her boy, and a soulful commitment to love her children in all the ways she can. I love Ella.