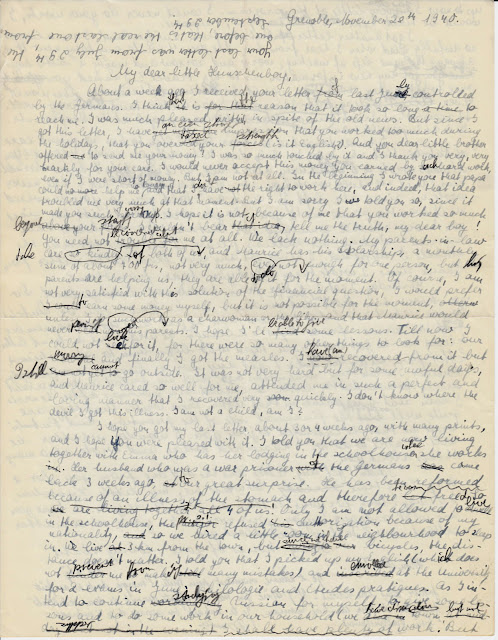 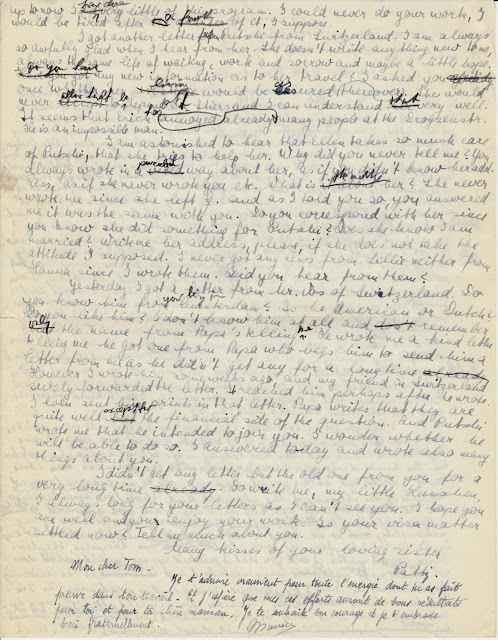 Transcription:
(transcribing this was a beast- thanks to Jason for tackling it! I included the edits and my own because it's confusing without them. I'm not sure who did the editing- perhaps Patti herself or Opa?)

At top upside down:
Your last letter was from July 29th, The one before, that is the real last one from September 29th.

This letter is confusing. Let me run by a synopsis: Patti is pleased that Opa wrote, she's upset that he worked so hard to make money and is afraid that he did it for her. Patti confirmed that she is safe and does not want for anything, however she gives that comforting information with a host of caveats that makes you realize how tentative her financial situation is: she is not allowed to work (except now perhaps she can give lessons/tutor), her husband gets a scholarship stipend that barely covers one person, and her in-laws are filling in the rest while they can. She is reassuring Opa that she is OK- but I'm not convinced. Then she tells Opa about her little bout with the Measles, which sounds awful. She treats it like a nuisance to be brushed off, but she is still unable to go outside- that's pretty intense. Then she talks about her friend whose husband returned from a prison because he was ill. I thought this was some weird code, but Patti's daughter Helene told me that the friend is named Emma (not to be confused with August's wife), but everyone called her Mickey. Emma and Patti were best friends. When Patti and Emma were first friends, Emma's husband was a French jew who went off to war but then was discharged due to a mental illness he developed while at war (perhaps what we call PTSD). He and Emma divorced. Patti mentions that she and Maurice are living with them and then she says that no- they are living in a rented room because of her German nationality. Helene told me this happened because the mayor found out Patti's nationality, so they were forced to move. Patti talks about picking up her English and taking classes. Helene tells me these are advanced level english course, including English Literature. Patti talks about learning Russian, which Ella also studied for her work at the Russian embassy. Helene said that Patti had many Russian friends and became fluent in Russian. I remember reading in Opa's autobiography that Patti even hoped to emigrate to Russia in the beginning of the war. She ended up in France instead. Patti talks about not Maurice not wanting her to be a charwoman- which is like a housekeeper or a maid. Apparently that was not a kosher thing to be doing.

Patti starts talking about Putschi (Ella) and says she got a letter through her friend in Switzerland. I love the way she describes Ella's letters: waiting, work, sorrow, and maybe a little hope. She asks Opa about her "travel" and if she would be liked "over there"- my guess is she's asking if Opa's gotten any further in the work to get his mother to the United States. Then we learn about how much everyone seemed to like Erich (Ella's brother-in-law, Opa and Patti's uncle)- not a whole lot. I wonder why he was so difficult to be around?

Patti got word from August through another friend in Switzerland, and he sent his good tidings. Everything was fine with August except the financial side of things. That was one way that Hitler did seem to attack his enemies, whoever they were- by ostracizing them financially. Helene remembers hearing that August was paid fairly well, so I wonder when the financial burden began. We know that conditions in Holland worsen as the war goes on. Apparently August still has dreams of traveling to the United States. I wonder if he is working some of his newspaper friend channels.

As always, Patti asks for more letters. She and her mother are alike in that request.

This letter is a jumble of information, questions, and frail reassurances. It's got to be exhausting to keep writing back and forth to your family the paragraph equivalents of "Still Alive." Especially when there is nothing anyone can really do about anything. Waiting, working, hoping.

I think back to my first year of marriage when I had moved to a new city, a new job, and my husband and I were managing the normal adjustments of adult married life. It was challenging... then I read here of Patti rooming with her friend and ex-POW, being evicted because of her nationality, not having the ability to work and depending on her in-laws for financial survival, and then the measles. I wonder what their evening conversations were like. Did they drink coffee in the morning and have even a few minutes without worry? The adrenaline of the wartime allowed them to continue in the state of waiting, working, and hoping.