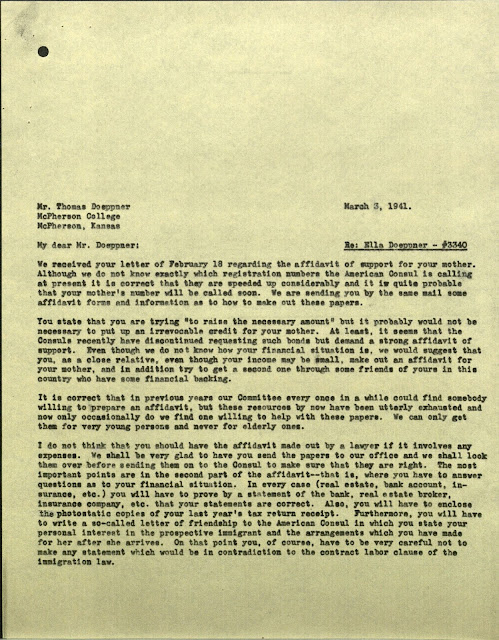 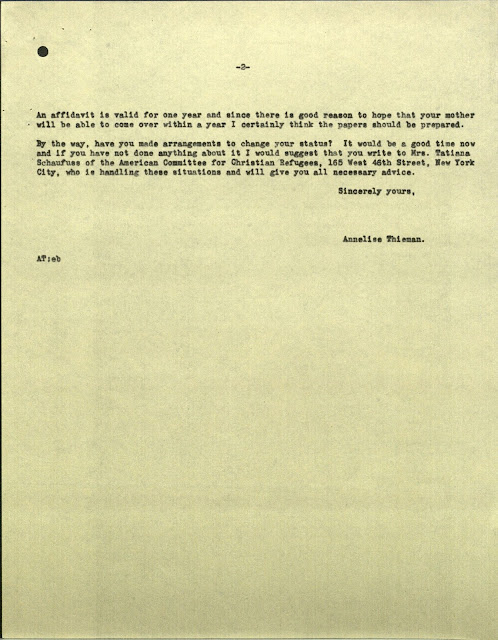 My dear Mr. Doeppner:
We received your letter of February 18 regarding the affidavit of support for your mother. Although we do not know exactly which registration numbers the American Consul is calling at present it is correct that they are speeded up considerably and it is quite probable that your mother's number will be called soon. We are sending you by the same mail some affidavit forms and information as to how to make out these papers.

You state that you are trying "to raise the necessary amount" but it probably would not be necessary to put up an irrevocable credit for your mother. At least, it seems that the Consuls recently have discontinued requesting such bonds but demand a strong affidavit of support. Even though we do not know how your financial situation is, we would suggest that you, as a close relative, even though your income may be small, make out an affidavit for your mother, and in addition try to get a second one through some friends of yours in this country who have some financial backing.

It is correct that in previous years our Committee every once in a while could find somebody willing to prepare an affidavit, but these resources by now have been utterly exhausted and now only occasionally do we find one wiling to help with these papers. We can only get them for very young persons and never for elderly ones.

I do not think that you should have the affidavit made out by a lawyer if it involves any expenses. We shall be very glad to have you send the papers to our office and we shall look them over before sending them on to the Consul to make sure that they are right. The most important points are in the second part of the affidavit--that is, where you have to answer questions as to your financial situation. In every case (real estate, bank account, insurance, etc.) you will have to prove by a statement of the bank, real estate broker, insurance company, etc. that your statements are correct. Also, you will have to enclose the photostatic copies of your last year's tax return receipt. Furthermore, you will have to write a so-called letter of friendship to the American Consul in which you state your personal interest in the prospective immigrant and the arrangements which you have made for her after she arrives. On that point you, of course, have to be very careful not to make any statement which would be in contradiction to the contract labor clause of the immigration law.

By the way, have you made arrangements to change your status? It would be a good time now and if you have not done anything about it I would suggest that you write to Mrs. Tatiana Schaufuss of the American Committee for Christian Refugees, 165 West 46th Street, New York City, who is handling these situations and will give you all necessary advice. 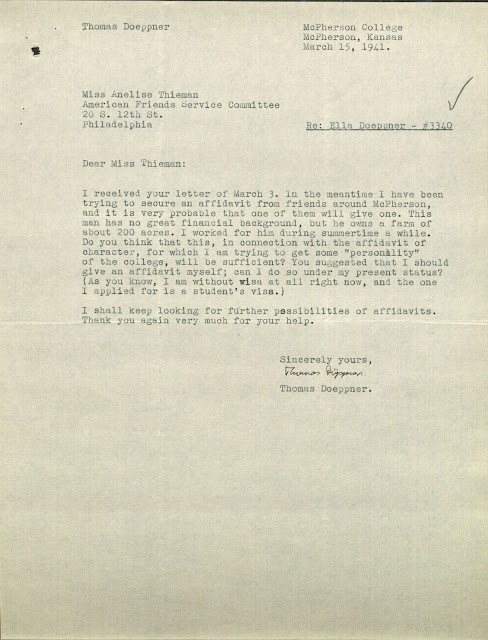 I received your letter of March 3. In the meantime I have been trying to secure an affidavit from friends around McPherson, and it is very probable that one of them will give one. This man has no great financial background, but he owns a farm of about 200 acres. I worked for him during summertime a while. Do you think that this, in connection with the affidavit of character, for which I am trying to get some "personality" of the college, will be sufficient? You suggested that I should give an affidavit myself; can I do so under my present status? (As you know, I am without visa at all right now, and the one I applied for is a student's visa.)

I shall keep looking for further possibilities of affidavits. Thank you again very much for your help.

Elderly. Ella was considered elderly at this point in time. She was 53 years old. I was so surprised by that. I did a quick search for the life expectancy in the 1940s and for Germany it was around 60 years old. That blew my mind. It shouldn't have, but I have the uncommon perspective of spending a lot of my time with elderly who are well into their 90s and still getting around like always. When I hear someone died in their 70s I am saddened that they were gone at such a young age. So when Annelise (how does she spell her name?! I feel like it keeps changing) mentioned that affidavits from the AFSC network had been exhausted except the rare occasion for very young people, certainly not the elderly- I thought- "she can't be talking about Ella?!" But she was, and appropriately so.

So now with that age of 53 years old as "elderly" in your mind, remember the history lessons of who was instantly sent to the crematoriums when the "Final Solution" was put into effect. The very young and the very old: potentially a 53 year old. The more connected I get to the people in my story, the more real this history becomes, and the more surreal the tragedy becomes.

Getting back to the letters. Opa's letter asking if it really was possible for his mother's immigration number to be up was answered quickly by Ms. Theiman, and optimistically so! What a rush of hope that must have surged through Opa. The time was now to get the affidavits, the possibility was here! Ms. Thieman of the AFSC gave him some helpful hints and affidavit forms and set him loose. One of the things she recommended was for Opa himself to be one of the affidavits, although he wasn't financially able to support Ella, he was a close relative and a legal resident of the United States. Or was he? She asks if he had set about changing his visa status and gives him a contact to help him with that.

Yeah, Opa responded with a solid "I am without a visa." I can't wait to see what she has to say about that. Opa's reply is essentially to let her know he's covering all his other bases, and even got what he hopes is a formidable affidavit. Here is what he wrote in his autobiography about looking for those affidavits and being a sponsor for his mother:

Realistically, this meant that I as the sponsor must already live in the States on an immigration visa (mine was a student visa) or be able otherwise to show that I was able to support her. There were some friends who tried to help: the parents of one of my fellow students in Kansas, Wilson and Blanche Shelley, offered to have her live with them on their large farm, and in addition would provide $5,000 from their savings, which was a lot of money in those days.

I can only imagine what must be going through Opa's mind as he frantically works to secure enough affidavits and support for his mother to immigrate to safety.