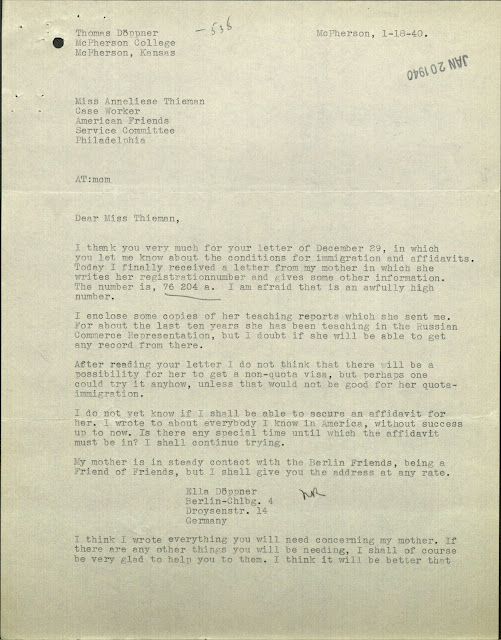 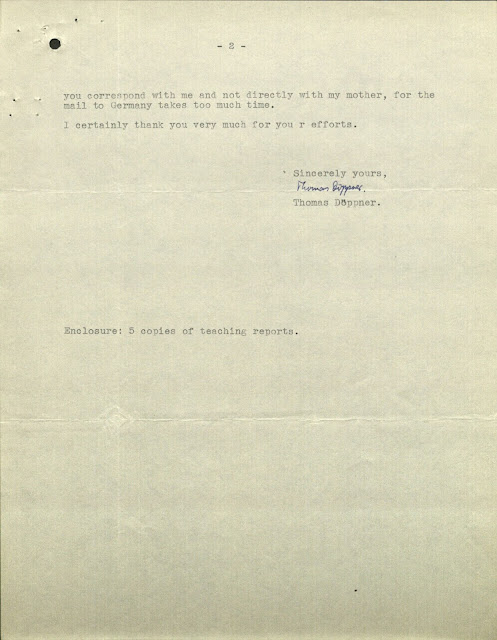 I thank you very much for your letter of December 29, in which you let me know about the conditions for immigration and affidavits. Today I finally received a letter from my mother in which she writes her registration number and gives some other information. The number is, 76 204a. I am afraid that is an awfully high number.

I enclose some copies of her teaching reports which she sent me. For about the last ten years she has been teaching in the Russian Commerce Representation, but I doubt if she will be able to get any record from there.

After reading your letter I do not think that there will be a possibility for her to get a non-quoat visa, but perhaps one could try it anyhow, unless that would not be good for her quota-immigration.

I do not yet know if I shall be able to secure an affidavit for her. I wrote to about everybody I know in America, without success up to now. Is there any special time until which the affidavit must be in? I shall continue trying.

My mother is in steady contact with the Berlin Friends, being a Friend of Friends, but I shall give you the address at any rate.

I think I wrote everything you will need concerning my mother. If there are any other things you will be needing, I shall of course be very glad to help you to them. I think it will be better that you correspond with me and not directly with my mother, for the mail to Germany takes too much time.

I certainly thank you very much for your efforts. 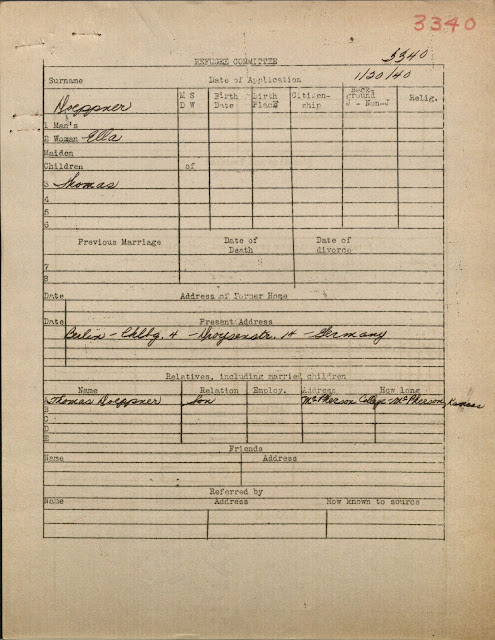 The beginnings of Ella's Case File with the American Friends Service Committee. Her case number is 3340. This document lists her name, her address, and Opa's name and address. 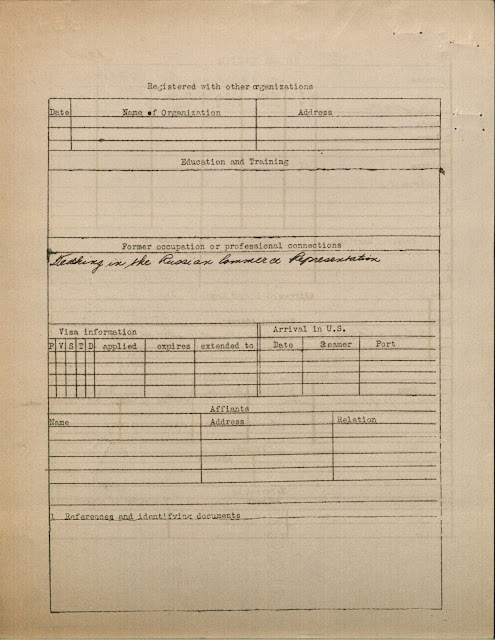 This is the second page to follow the one above. It states her work experience as a teacher at the Russian Embassy. 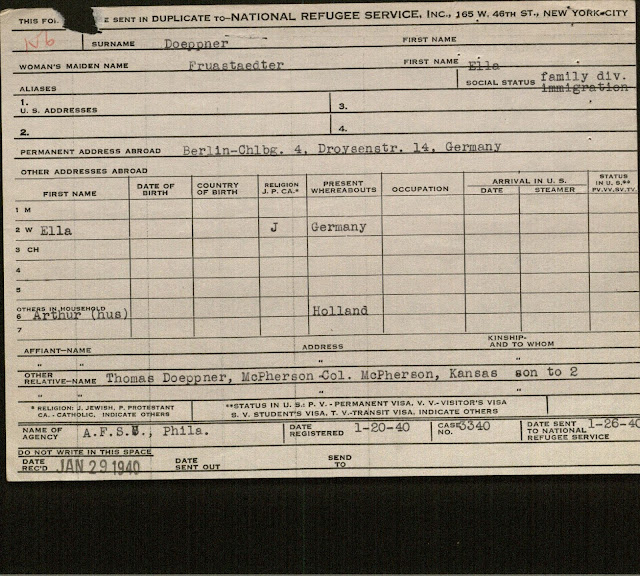 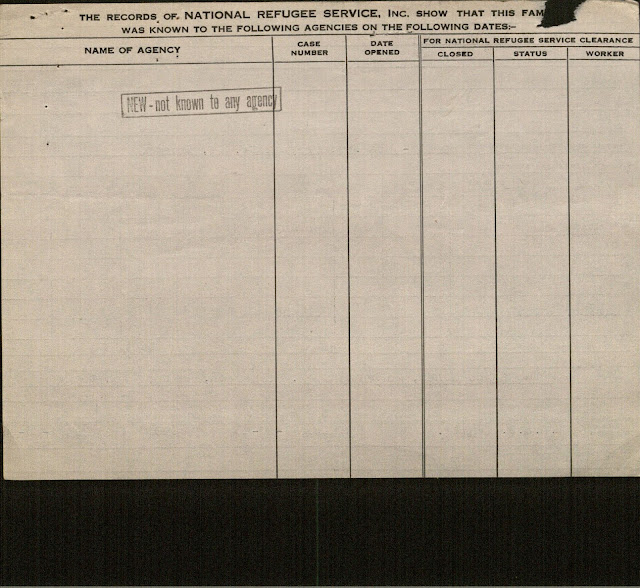 These two documents are almost identical in information to the previous two documents. The only difference is that it lists Ella's husband, except it uses the name Arthur instead of August and says they are still married.


Before I get into the letter, I want to make a quick observation about the documents. I think it is interesting some of the details that are included and some that are left out. I wonder if the omissions are purposeful. Patti (Brigitte)- Opa’s sister, is missing from the family information. August is mentioned by another name (Arthur) and not noted as a divorced husband. This may simply be because all the information has not arrived, or it could be that they were trying to protect Patti’s identity (her daughter, Helene said that she practiced and perfected her French so that people would think she was French and not German). On the national refugee service paper, it indicates that Ella is Jewish. All the documents clearly list that she has a son in America. I wonder if that was helpful?

Now onto the letter from Opa to Anneliese Thieman...

“I am afraid that is an awfully high number”


This is pretty much the tenor of the entire letter. You can almost feel the disappointment that Opa has when he learns his mother’s number and writes this letter to the American Friends Service Committee (AFSC). He gives all the information he is asked for: her work information, her address, and most importantly, her registration number. Ella got this number in November, a year after the infamous Kristallnacht.

He gives the case-worker her address, but reminds her that Ella is connected with the Quakers (almost like a back-up plan in case his mom cannot be reached at her house). He encourages Miss Thieman to correspond with him because of the time it takes for mail to get to Germany, but I wonder if he is also trying to protect his mother in a way.

Opa is doing the best he can to help his mom out. He has tried to contact everyone he knows in America in order to secure an affidavit for her. Remember, an affidavit is a legal document where a person makes themselves financially liable for an immigrant. It takes a lot of paperwork and some actual money in the bank to secure a viable affidavit.

He was hoping that Ella’s teaching experience at the Russian Embassy might make her a unique exception for a non-quota visa, but now he isn’t hanging his hat on that hope.

The whole letter is just Opa shell-shocked, giving what he can and trying. Let me give you a quick reminder of the immigration policy of this time period. The quota is the number of folks allowed into the US from a given country. I’m trying to find the exact quota number for Germany in the year 1940, and I’m having trouble. I found a number from 1938 where the quota is 25,975, although at some point the numbers for Austria and Germany were combined. I will look for a reputable source and correct this when I can (if you can help- let me know!), but in the meantime- let’s assume it’s between 25,000 and 50,000. Now you can see why Ella’s number seemed so high. She's 20,000th in line behind the limit.

There is still a little hope: not everyone with a number in line gets to emigrate. In fact, that’s really the good and bad news: a registration number still doesn’t even remotely guarantee you entry. Opa’s hope is that for whatever reason, enough folks ahead of Ella won’t emigrate, and quickly, so that Ella will get a chance before the year and quota and political climate changes. Each visa application (if it gets processed) is processed by a person who has their own ways of interpreting the immigration policy. So if that person has been told by their supervisor that “financially stable” means that the immigrant needs to be able to work, then that’ll be the lens by which they determine financial stability. If the going feeling is that there should be nothing left to chance, then the affidavit might need to provide the kind of financial stability that only someone of extreme wealth can provide (Daddy Warbucks, for example). You have no idea what day, what person, what interpretation will be in use. So- this is why the letter from Annaliese said, essentially, the more money the better.


This is why Opa has his work cut out for him. There is still hope, but he’s fighting a lot of shifting odds, and the high registration number could not have been that encouraging. I am in awe of his resolve.

I have to remind myself that this is not the only thing he is doing. He just arrived to a new country, he has been away from home for over a year with no safe return in his foreseeable future. He hasn’t seen his mother in that long, and while he was in Amsterdam as an illegal escapee- he wasn’t able to contact her directly. He is surrounded by a new culture, a new language, and there is not one familiar person around. He is still 19 years old. He also happens to be starting his first year of college (taught in a language he is still learning). And remember all those letters that he has been asked to write and is writing? His friends, mother, father, sister (all in separate houses), and those who helped him emigrate- they all need letters of updates, thanks, etc. And he has a job to support himself through school. Plus I suppose he’s trying to be social and kind to thank the people in the school for raising support for his scholarship. I’m overwhelmed by it. I can only imagine he must have been. I never saw Opa cry in my entire life. How often did the weight of his world cause him to weep in those days? I will never know, maybe never- but I don’t see how you can have all that in your mind and not weep it out at some point. Yet, through Opa’s disappointment, one thing is clear...


“I shall continue trying… “