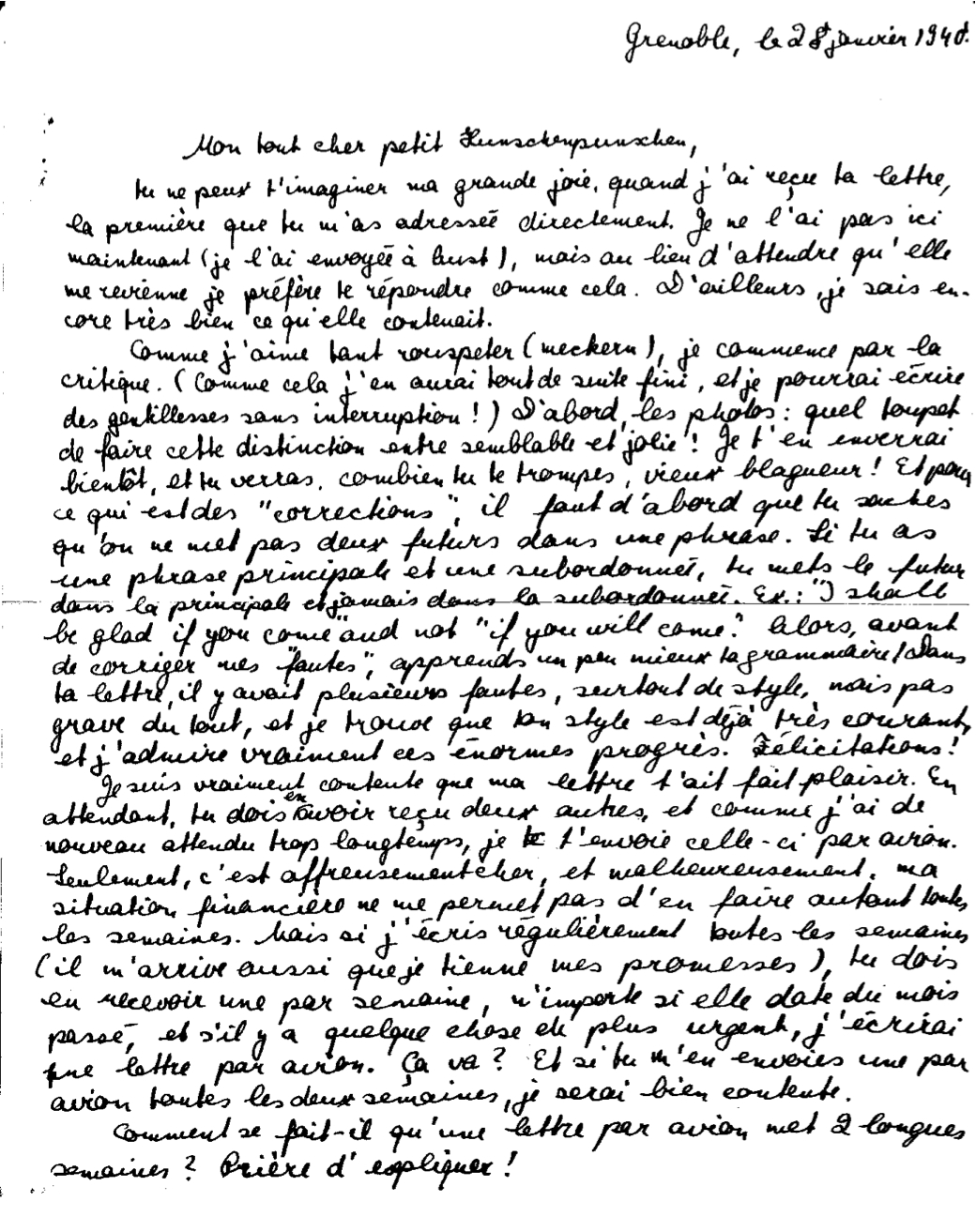 You can’t imagine my great joy upon receiving your letter, the first that you’ve sent here directly. I don’t have it here now, I sent it to Anst (=Anschen(??), but instead of waiting for it to come back to me, I prefer to answer you without it. Moreover, I still know very well what it said.

Since I so much like to complain (meckern), I’ll start with a critique. That way I’ll be done with that part right away, and I’ll be able to write non-stop niceties! First, the photos: what gall to distinguish between “a resemblance” and “pretty”! (My guess is that she’s referring to photos she sent of herself??) I’ll send you some (more?) soon, and you’ll see how wrong you are, you old joker! And as for your “corrections”, you must first know that it’s not possible to use two futures in one sentence. If you have a main and a subordinate clause, you use the future in the main clause but never in the subordinate one. Ex: “I shall be glad if you come” and not “if you will come”. So, before you correct my “mistakes”, learn your grammar better! In your letter there were several mistakes, especially stylistic ones, but not serious at all, and I think your style is already quite colloquial, and I really admire your enormous progress.  Congratulations!

I am really happy that my letter gave you pleasure. Meanwhile you must have received two more from me, and since I waited too long again, I am sending this one airmail. Only, that’s hideously expensive, and unfortunately, my financial situation doesn’t allow me to do that every week. But if I write regularly every week (it sometimes does happen that I keep my promises), you should receive one every week, so, too bad if it is dated the previous month, and if something more urgent comes up, I’ll write an airmail letter. Okay?  And if you send me an airmail letter every other week, I’ll be very happy.

But why, pray tell, does an airmail letter take 2 long weeks?

Anst sent me your letter to Putschi, in which you speak of your vacation plans. I really hope that you spent a good vacation with your various friends. How nice it is on their part to invite you into their homes. I see that you are a guest much in demand, and I am happy for you. I know from experience how nice it is to feel surrounded by affection in a country where one doesn’t have one’s own parents.

I was a bit surprised that you told me of a certain difference in character (attitude?) between your friends and you. In fact, that is completely normal, but in your case, it surprises me. I’ve always thought that you had a way of thinking very similar to the so-called American way of thinking. But all that is very relative, and I’m too unfamiliar with the American way to know it well. And I admit to you that I don’t know yours of the last years; you must have changed a lot, little boxer-brother! I, too, often find myself at odds with a mentality that is foreign to my own, but I was forced to notice the same thing at home; on the other hand, I sometimes find very kindred spirits, in whose company I feel completely at ease.

As for general ways of thinking, it is natural that you are finding a greater difference there than I, here. But you won’t stay forever in Kansas, America is large, and for the moment, you have landed in a great place, so we are all very happy for you. I also am noticing with pleasure that work gives you a lot of pleasure, and that you are more passionate than ever before.

Keep writing me about everything that interests you, all the little details of your everyday life, speak to me of your friends, your work, all that interests me greatly and gives me the impression of being a little nearer to you. I really like the idea of visualizing you in your setting, of observing your activities and how you evolve. And don’t forget to send me photos from time to time!

Do you seriously think that you’ll be able to get something for Putschi? And when, approximately? If only she could get out of that hell, poor dear! I don’t need to beg of you to do whatever is possible, you will certainly do that without my asking.

Tomorrow or soon after, I will send you a letter by boat so that not too much time passes between this letter and that one. I’ll then tell you about the magnificent ski trip that I went on Friday, with a friend with whom you have much in common.

That’s all for today. Wishing you all the best, I give you a big hug. Patti

Another letter from Opa’s sister, Patti- I have to admit I am just falling in love with Opa’s family. It blows my mind that it is my family. I think Patti and I would have been friends. I would have loved her nerdy references to grammar, her self-conscious jabs at her ability to follow through on promises, and her self-assured personality. She is simultaneously self-aware and self-conscious. I love her.

Just for clarity- Putschi is Ella- their mother, and Anst we think is Anchen- their aunt (August’s sister).

Patti starts this letter with some grammar technique- in which I learned a little lesson. Then she talks letter-writing logistics. Then she mentions something that I think is interesting to note. She writes of her surprise that Opa feels different from the Americans. I have had many great conversations with Patti’s daughter, Helene, and she tells me of the differences between the brother and sister and the roles that they played in the family. Patti was the serious, sensitive one. Opa was the happy, carefree one. These were part of their personalities, but in a family that suffered separation, hardship, and a Nazi takeover- these personality traits became roles that kept the family stable, dependable, predictable. Opa remained the happy-go-lucky boy even if he maybe didn’t feel like it. Patti was the serious, sensitive thinker- perhaps she was entrusted with the more serious truth, or maybe shielded from it because of her sensitivity. However this dynamic played itself out - Patti was surprised when her happy, optimistic brother didn’t fit right in with the American culture. Or perhaps when she found that he was thinking deeply and asking questions like she often did.

The interesting thing is, Patti and my Opa did sort of fall into their roles even into adulthood. Patti’s expectation was right in a way, as Opa continued to move forward, embracing the American spirit, and leaving behind his German memories. Patti was just the opposite, holding dear the mantra “never forget” in her efforts to make sense of her troubled memories.

Don’t we all have roles we play in our family? Sometimes they help us through tough times, sometimes they suffocate us. The Opa I knew was very much a proud American, and felt that he was truly in the best place in the world. However, he did always have a perspective that made him understand just how lucky he was, and that things don’t always work out for the best. That tension within him was less obvious to those who might not have known his background. He really didn’t talk much about Germany with his family (my sisters and my parents). But strangely enough, he found space to talk with Helene, his niece, about it. I wonder about the conversations that he and Patti must have had... did she wish that she could adapt like Opa and move on? Or did she resent his ability to sort of forget. Did he wish for her ability to remember and embrace their troubled nation’s past? Or did he grow tired of her memories, bringing him only pain and discomfort? I imagine they didn't have absolute emotions, and in themselves swayed from one extreme to the other. Ultimately Patti erred on the side of remembrance, and Opa erred on the side of adaptation.

I think about the roles my sisters and I play, and how sometimes we find comfort in them, and sometimes we are frustrated by them. What happens when these roles intersect with tragedy? Do you grow, bend, change- or do you cling to the same? How much do these roles affect our lives, our roles in society as a whole?

A nation like Germany that struggled with the role of defeated and defenseless after World War 1... they longed to be strong- to change their role. Their collective greed to feel powerful and formidable again made them willing players in Hitler’s game of genocide. Some players never realize their role in the big picture. It’s a reminder to me to examine my role, in each level of the game. We are all connected together- and the role we play might be comforting for us but devastating for others. Maybe we all need to struggle with the discomfort of growing up and out of some of our roles...and allowing others to do the same... even if it surprises us or challenges us.
Posted by Sarah Snow at Wednesday, August 12, 2015