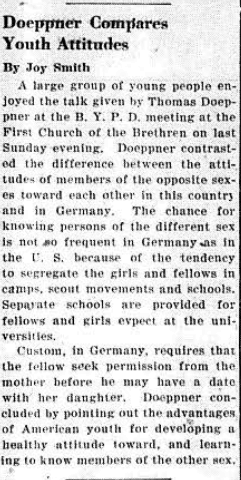 A large group of young people enjoyed the talk given by Thomas Doeppner at the B.Y.P.D. meeting at the First Church of the Brethren on last Sunday evening. Deeper contrasted the difference between the attitudes of members of the opposite sexes toward each other in this country and in Germany. The chance for knowing persons of the different sex is not so frequent in Germany as in the U.S. because of the tendency to segregate the girls and fellows in camps, scout movements and schools. Separate schools are provided for fellows and girls except at the universities.

Custom, in Germany, requires that the fellow seek permission from the mother before he may have a date with her daughter. Deeper concluded by pointing out the advantages of  American youth for developing a healthy attitude toward, and learning to know members of the other sex.

This is just pure gold. First- we can see from all of Opa's girl problems (and the fact that he asked out or proposed to nearly every single woman that he was friends with as a young man), that this co-ed environment was an adjustment. The only time he had experience with mingling with girls was in the Quaker youth group, and in his autobiography he made a special note about how it was unusual because the boys and girls were together in one group.

I love that they call boys "fellows." It puts this article right smack dab in 1940 Kansas.

It's fun to hear about some of the common German customs (and gender divides) from Opa's mouth. I wonder how many of these type presentations he made as the token German in the middle of Kansas. Also- what is the BYPD group? I thought of "bring your own police department," "Better Yet, Play Dumb," and others but I stopped myself.

And of course, Opa is a fan of putting girls and boys in one place, and commends Americans for their superior ways in this cultural norm. Hahaha. 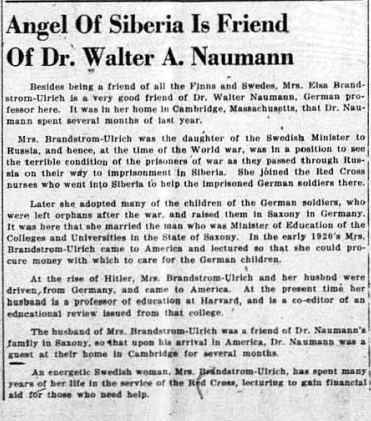 Article in The Spectator about Dr. Walter Naumann

Angel of Siberia is Friend of Dr. Walter A. Naumann

Besides being friend of all the Finns and Swedes, Mrs. Elsa Brandstrom-Ulrich is a very good friend of Dr. Walter Naumann, German professor here. It was in her home in Cambridge, Massachusetts, that Dr. Naumann spent several months of last year.

Mrs. Brandstrom-Ulrich was the daughter of the Swedish Minister to Russia, and hence, at the time of the World war, was in a position to see the terrible condition of the prisoners of war as they passed through Russia on their way to imprisonment in Siberia. She joined the Red Cross nurses who went into Siberia to help the imprisoned German soldiers there.

Later she adopted many of the children of the German soldiers, who were left orphans after the war, and raised them in Saxony in Germany. It was here that she married the man who was the Minister of Education of the Colleges and Universities in the State of Saxony. In the early 1920's Mrs. Brandstrom-Ulrich came to America and lectured so that she could procure money with which to care for the German children.

At the rise of Hitler, Mrs. Brandstrom-Ulrich and her husband were driven from Germany, and came to America. At the present time her husband is a professor of education at Harvard, and is a co-editor of an education review issued from that college.

The husband of Mrs. Brandstrom-Ulrich was a friend of Dr. Naumann's family in Saxony, so that upon his arrival in America, Dr. Naumann was a guest at their home in Cambridge for several months.

An energetic Swedish woman, Mrs. Brandstrom-Ulrich, has spent many years of her life in the service of the Red Cross, lecturing to gain financial aid for those who need help.

This article is slightly more serious. I couldn't help but notice how intentional (and smart) the folks at McPherson College were to keep positive news and stories about the German refugees in their midst. These little articles and blurbs helped to maintain an awareness and acceptance of the two German refugees. In this case, if anything should happen where Germans become even less liked and trusted, these two have built a positive public profile. It's brilliant.

Dr. Naumann seems to know some pretty impressive folks. Mrs. Brandstorm-Ulrich is an "angel of Siberia." I have to critique this article though. It says that she adopted the German children, then it talks about her and her husband leaving Germany to come to the United States because of Hitler. Where are the kids? Are they with her? They must be older now so I guess they're still in Germany? I kind of wanted some closure about these orphaned kids.

These two articles show that both Opa and Dr. Naumann had some friends who helped them in their journey to the United States, and that McPherson College is invested in their story.