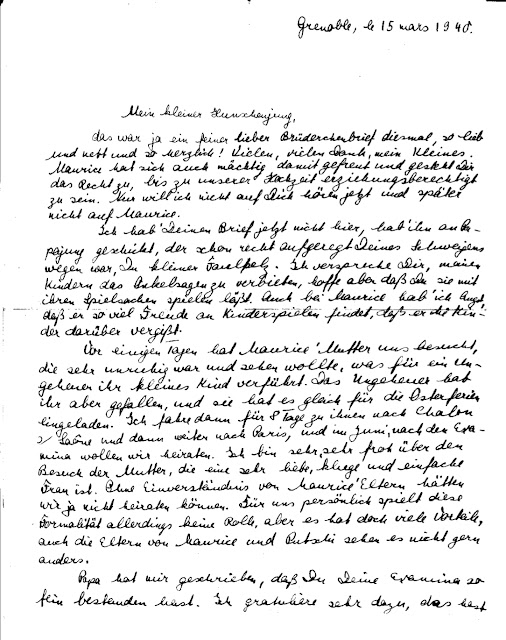 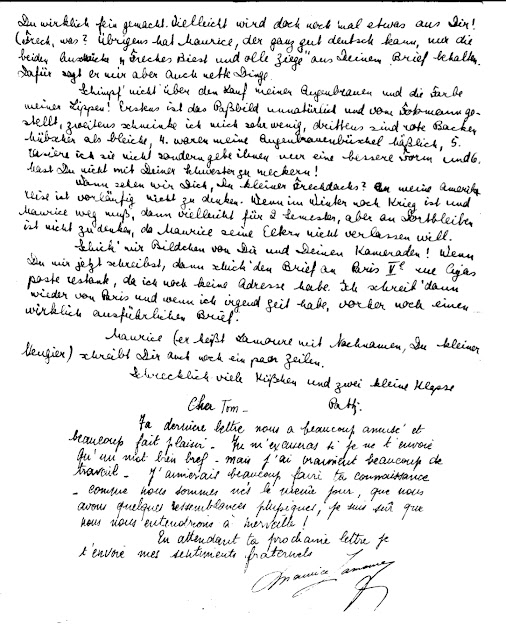 Letter from Patti to Opa (with a Post Script from Maurice)

Grenoble, March 15, 1940
My little Hunschenboy,
That was certainly a fine, sweet, little brother letter this time—so sweet and nice and so heartfelt! Thank you so, so much, my little one. Maurice was also really happy about it and concedes to you the right to be my guardian up until our wedding. Only, I don’t want to answer to you now, and not to Maurice later, either.
I don’t have your letter here now, I sent it to Papa Boy who was getting worried because of your silence, you lazy little bum. I promise you, I’m going to forbid my children from uncle-talk, (or "I won't even let my children call you uncle") I do hope you’ll let them play with your toys, though! Even with Maurice I’m afraid he’s going to have so much fun playing children’s games that he’ll forget about the children.
A few days ago we had a visit from Maurice’s mother, who was very anxious and wanted to see what kind of monster had trapped her little boy. She turned out to like the monster, though, and immediately invited it for the Easter holiday. So I’m going to go stay with them for 8 days in Chalon(...) and then back to Paris, and in June, after exams, we want to get married. I am really, really happy about the visit from his mother, who is a very sweet, smart and simple woman. Without the approval of Maurice’s parents we wouldn’t have been able to get married. For us personally, this formality isn’t important, but it does, after all, have its advantages, and Maurice’s parents and Putschi wouldn’t have it any other way.
Papa wrote to me that you passed your exams with flying colors. I really congratulate you on doing so well. Maybe you’ll actually make something of yourself after all! Maurice, by the way, who knows German very well, only took away the two expressions “impudent beast” and “old goat” from your letter. For that, he also says nice things to me though.
Don’t complain about the shape of my eyebrows and the color of my lips! First of all, the passport photo is unnatural looking and was ordered from the photo man, second of all, I wear very little makeup, third of all, red cheeks are prettier than pale ones, fourth, my bushy eyebrows were ugly, fifth, all I wanted to do was give them a better shape, sixth, don’t you have anything better to fight with your sister about?!
When are we going to see you, you impudent little badger? I can’t think about my trip to America right now. If by winter the war’s still going on and Maurice has to go away, then maybe for two semesters, but I can’t think about staying there, because Maurice doesn’t want to leave his parents.
Send me pictures of you and your friends! If you write to me now, send the letter to Paris [area] poste restant [general delivery] since I don’t have an address yet. I’ll write again from Paris, and if I have some time, another really detailed letter beforehand.
Maurice (his last name is Lamoure, you nosy little thing) also has a few lines to write you.
Terribly many kisses and two little smacks,
Patti

Your last letter amused us greatly, and gave us much pleasure. Please excuse me if I only write very briefly now -- but I really have a lot of work. I would very much like to meet you - since we were born the same day and look somewhat alike, I'm sure that we'd get along famously!
I look forward to your next letter and send my brotherly regards, Maurice Lamoure

Patti is really the quintessential older sister. I love it. She writes with sort of a maternal voice to her "fine, sweet little brother." This *thrilled* Opa- I'm sure. At least she gave him the title of guardian even if she made it clear no one got to tell her what to do (way to go Patti!). It's interesting, the person who translated this letter is about my age and made a little footnote on that comment by Patti. She wondered if they were joking since August was still alive (and we would assume the father would play this guardian role). I didn't even see it as odd until I read the footnote. I think this is a subtle sign of the kind of relationship Patti and Opa had with their Father. I think they loved him and felt loved by him, but there was a certain distance there. Patti and Opa acted parental towards each other- I think in a way to fill in some of the gaps. They were all separated at this point, August has been sort of outside the family circle- welcomed- but not part of the inner circle. Ella is sort of the third wheel of the three, as they keep hard truths from her (she's nervous enough). So Patti and Opa take care of themselves, but are there to protect the other if needed. Their relationship continues to fascinate me- the more I read their letters and speak with Helene (Patti's daughter), the more perspective I get on how very close and yet very different they were.

Patti is playing the happy fiancé role in this letter, laughing about future children, parental approval, and other typical markers of a newly engaged couple. You might have noticed that they were glad to have formal approval from Maurice's parents and Putsch (Ella)- but no mention of August in that part. I don't think it is a purposeful omission to make a point- it's just part of their natural thinking.

It seems that Opa made fun of Patti's shaped eye-brows and lipstick (read: things that make her look like a grown up woman). Patti pretty much tells him to get over it.

Patti plans to go to Paris, take her exams and get married. She mentions traveling to the USA (it seems Opa suggested it) and how she's not sure she could go and stay there long- Maurice wants to stay near his parents. I thought it was interesting that she wrote "if by winter the war is still going on..." I wonder if this was just hopeful thinking and she knew it would likely be longer, or if she really thought it might only last that long? The way Patti talks about America, it's as if she'd planned on going at some point.

This letter is so odd to me- it's almost like a denial letter. She completely ignores the war (except to mention it in passing like this small inconvenience that will last a couple semesters). She talks about going to America like it's easy to do. I know Patti has been careful not to obsess or worry in her letters (so as not to cause worry to the recipients) but this one seems almost too chirpy and happy. Does that make me cynical? I don't know- but I almost feel like she is more nervous and worried about life because she is so chirpy and silly in this letter. It almost feels fake. And Patti does not strike me as a fake person- maybe that's why it feels so off.

I couldn't help but start singing that stupidly catchy song "Everything is Awesome!" It's like Patti is singing that to herself to drown out all the scary parts.

Maurice writes a few lines in French that are kind of awkward- but what do you expect? At least he's writing.