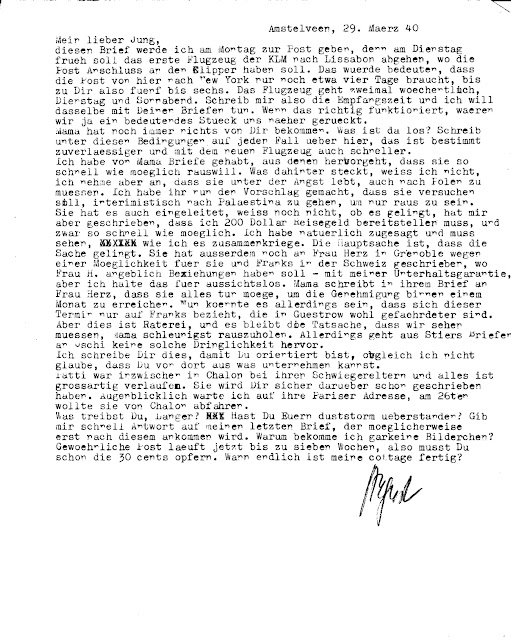 Letter from August to Opa

Translation:
Amstelveen, March 29, 1940
My dear boy,
I’m going to mail this letter on Monday, because early Tuesday morning the first KLM airplane is supposed to take off for Lisbon, where the mail should end up on the clipper. That would mean that the mail only needs around four days to get from here to New York, five or six all the way to you. The plane leaves two times a week, Tuesday and Sunday evening. Tell me when you get it, and I’ll do the same with your letters. If it works right, we’ll have moved a good bit closer to each other!
Mama still hasn’t gotten anything from you.  What’s wrong? Under these conditions, write here, that’s certainly more reliable and with the new airplane also faster.
I’ve gotten letters from Mama, from which it’s clear that she wants to get out as soon as possible. What’s behind that, I don’t know, but I take it she’s living in fear of being made to go to Poland too. I suggested to her that she go to Palestine in the meantime, just to get out. She started to, too, I just don’t know if it will work, but she wrote to me that I needed to send her 200 dollars travel money, and as quickly as possible. Naturally, I promised, and have to see how I’ll get it together. The important thing is that the thing works. Besides that she also wrote to Frau Herz in Grenoble about a possibility for her and the Franks in Switzerland, where Frau H. supposedly has connections— for what my opinion is worth, I think it’s hopeless. Mama writes in her letter to Frau Herz that she’d like to do everything she can to get the approval within a month. It surely could be that this deadline has to do with the Franks, who are in much more danger in Güstrow. But that’s just a guess, and the main thing remains that we have to see to it that Mama gets out of there quickly. In any case, in Stier’s letters to Uschi you don’t get the same sense of urgency.
I’m writing all this to you so that you know what’s going on, even though I don’t think there’s anything you can do from there.
Patti, meanwhile, was in Chalon at her in-laws’ and everything went wonderfully. I’m sure she will have already written to you about that. At the moment I’m waiting on her Paris address, she wants to leave Chalon on the 26th.
What are you up to, Tall One? Did you survive your dust storm? Answer my last letter quickly, which will possibly get there right after this one. Why am I not getting any pictures? Regular mail is taking up to seven weeks now, so you’ll have to sacrifice the 30 cents. When is my cottage finally going to be ready?
August

August writes a letter with slightly less anxiety than the last one, although you can tell he is still concerned about Opa's visa and making sure he stays in the United States.

Here is where we get a better picture of how people talked about what was happening to the Jews in Germany. August does not know what to think. I think he struggles between a sense of urgency by what he hears and knows to be true, and a sense of security (albeit false) that those sort of things don't usually happen on a very broad scale. So he's guessing that Ella's sense of urgency has some validity to it, but he doesn't know exactly what to do about it. He promises her $200 travel money, I wonder if he follows through on it. August suggests Palestine (seen as a safe place for Jews to go) and Ella seems to be looking into every chance of getting out of Germany. Switzerland is also a possibility through a friend who might have connections.

In this flurry of activity and fear, people like the American Friends Service Committee and other helpful organizations pop up to help these people. However, so do people who are looking to make a quick buck in scams that lead people to believe that they are getting a ticket out - but really just lose their money. I have read about these scams, but the more I see the fear and reality of the people who are scrambling to find a way out of Hitler's reach, the more these scam artists are making me sick to my stomach.

Everyone agrees that Ella needs to get out- no matter where or how. August is not sure why Ella feels the urgency, but her sister (the Stiers) don't seem to feel that same urgency. I think that it is kind of unusual for August to be this frank about Ella's situation and her frantic desire to get out of Germany, especially since he says that Opa can't really do much about it where he is. However, I do think August is trying to be honest and let Opa realize just how serious the situation is- in case he can do anything.

It looks like August is familiar with the dust storms of Kansas- and Opa is now personally acquainted with them. (I wonder how that first dust storm experience went?!) August is still anxious to hear Opa's response to his letter of questions about the visa and what he is going to do next year. He's pretty much demanded that Opa spend the extra money to have the letter sent airmail rather than by the slower ship.

In the end, August wants pictures, and to know when his cottage will be ready (his on-going joke that he's going to move to America to a cottage in the woods).

I think August is a little overwhelmed and not so sure what is going to happen. He's trying to get a handle on something concrete- at least hoping that Opa stays safe in the USA. He's trying to make sense of the rumors and the news, and communicate despite unreliable letter delivery. All the while, August knows that the Nazi's are likely to invade in the spring... but when? And how will that go? April is just around the corner.
Posted by Sarah Snow at Sunday, August 30, 2015