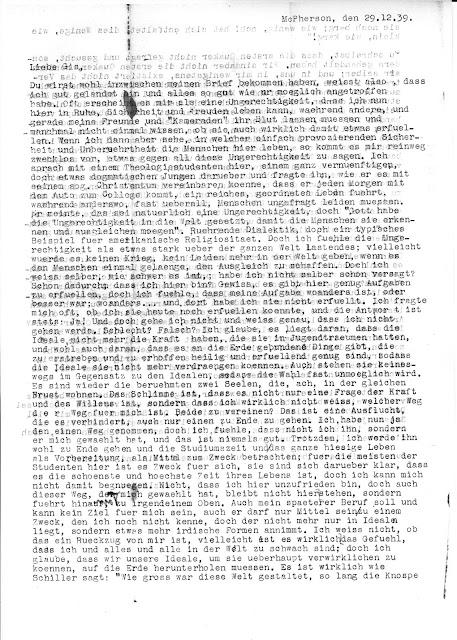 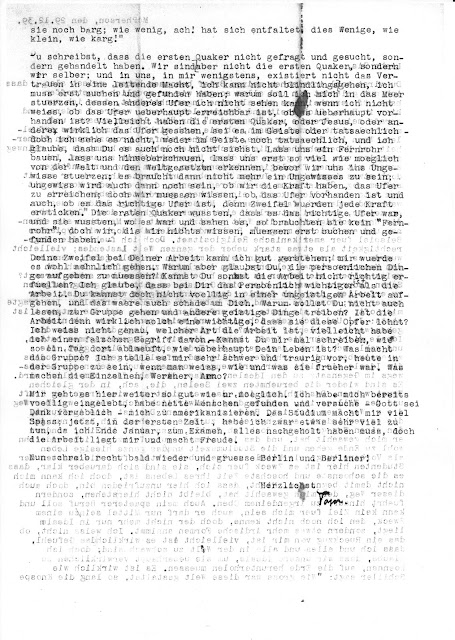 Original Letter from Opa to Gisela

McPherson, Dec. 29th, 1939
Dear Gis,
You probably have received my letter by now, and know that I have arrived well, and have found everything in good order. Often it seems unjust to me that I should live here in joy, quiet and safety, while others and especially my friends and 'colleagues' have to give their blood, and sometimes don't even know if they really fulfill anything by it.

This letter is profound and a little hard to understand. I’m sure, again, that there are some things lost in translation and some things that I would understand better if I was like Gis and had the privilege of hours long talks while walking with my young Opa.


Opa struggles with the idea of justice and fairness in this letter. He speaks of his own uneasiness at living a safe and quiet life in America. It is almost a survivor’s guilt, except he doesn’t yet know what he has avoided and survived.


“When I see how people live here with such provoking security and unaffectedness…” Those are pointed words that pierce my conscience. I can imagine that my security would provoke many a refugee. Opa finds a theology student to talk to about his struggle with the injustice of their provoking security. How could the student get in his car and drive in luxury to his quiet life when elsewhere people were shot on the spot… for their bad blood?


The theology student’s response is a little bit awkward in the wording, but it seems like the student is saying that the injustice is there for us (by God’s will?) to notice and try to balance it. Opa’s response is that this is a moving dialectic- which I interpret to mean- this is kind of baloney and bad logic. As someone who graduated from seminary, I kind of wish I could have had someone like Opa ask me hard questions like this. Did that student remain unaffected, or did they feel the piercing of their comfort? Years later, Martin Luther King, Jr will write in his letters from the Birmingham jail: “Injustice anywhere is a threat to justice everywhere.” It’s as if Opa can feel this idea brimming in his heart, and he can’t fathom why no one else feels burdened by the injustice.


Opa doesn’t know what to do with this. How can he do anything about it? He takes what the theology student says about balancing the justice and points to himself- “have I not failed myself already through the fact that I am here?” He feels pulled homeward to do something- and yet he knows he won’t go there. There is guilt. His youthful ideals of fighting the fight, doing the right thing, slaying the dragons- they lose their power in the face of reality. When he faces certain death (conscription into Hitler’s army)- he loses the ability to live up to his ideals. It’s like he is fighting two wills within himself - to get free, to get an education, to make his life worth something; and then on the other side- to stand and fight, to make evil answer, to balance the injustice back to justice.


Opa faces the normal young adult questions of “why am I here?” and “what is my calling?” with the weight of his friends’ lives, his family’s lives on his shoulder. Who can answer that kind of weight?! How helpless he must feel being free and guiltily happy for all his friends and family to see. How much pressure he gets from the letters to use his privilege well- to be worth saving.


Opa hopes. He hopes that the path he is on, even if he may not find his “purpose”- that he will find something useful to set himself on the path toward his purpose. I wonder even now- did Opa find his purpose? What would he have thought it to be? He lived a beautiful life and was a wonderful grandfather. What was his dream? Did he reach it?


I think we equate maturity with rational and straightforward thinking. Dreamy, philosophical letters like this- if we had written them at nineteen, we would just laugh at ourselves. But I think a lot of us lose our dreams because we try to become sensible adults. We don't worry about injustice because we focus our eyes on the ground beneath us. These are the kinds of questions and thoughts we should entertain well into our elderly age. We should confront ourselves with our provoking security. We should engage with theology students, refugees, friends, family, scientists, professors, and whoever else will talk to us. We shouldn’t stop pouring out our hearts and feeling the stretch that is living our lives and dreaming our dreams. The stretching makes us flexible, adaptable, it makes us grow. It gives us wisdom. So here’s to recognizing our own provoking security, and wrestling with it. For the sake of justice.
Posted by Sarah Snow at Monday, August 03, 2015