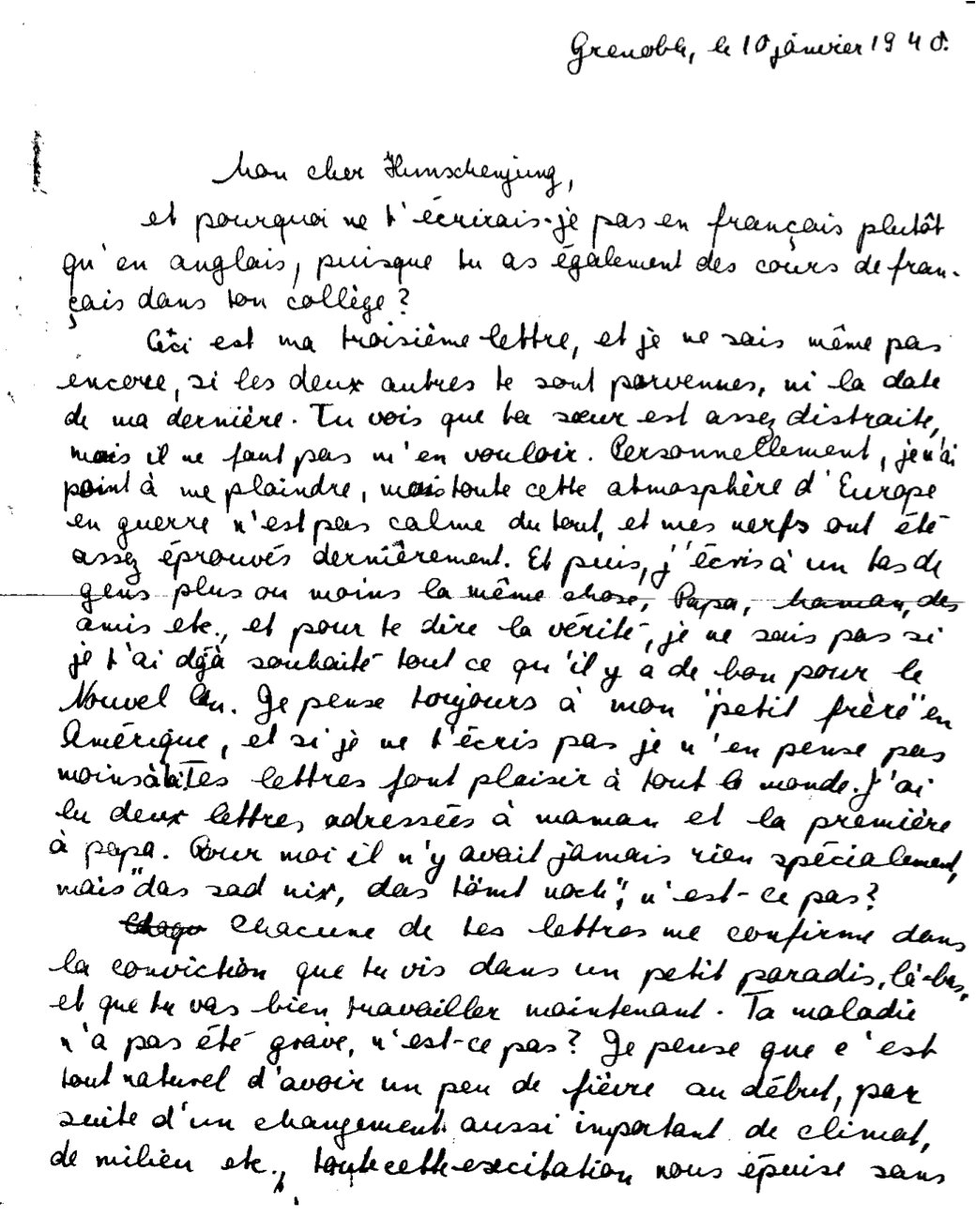 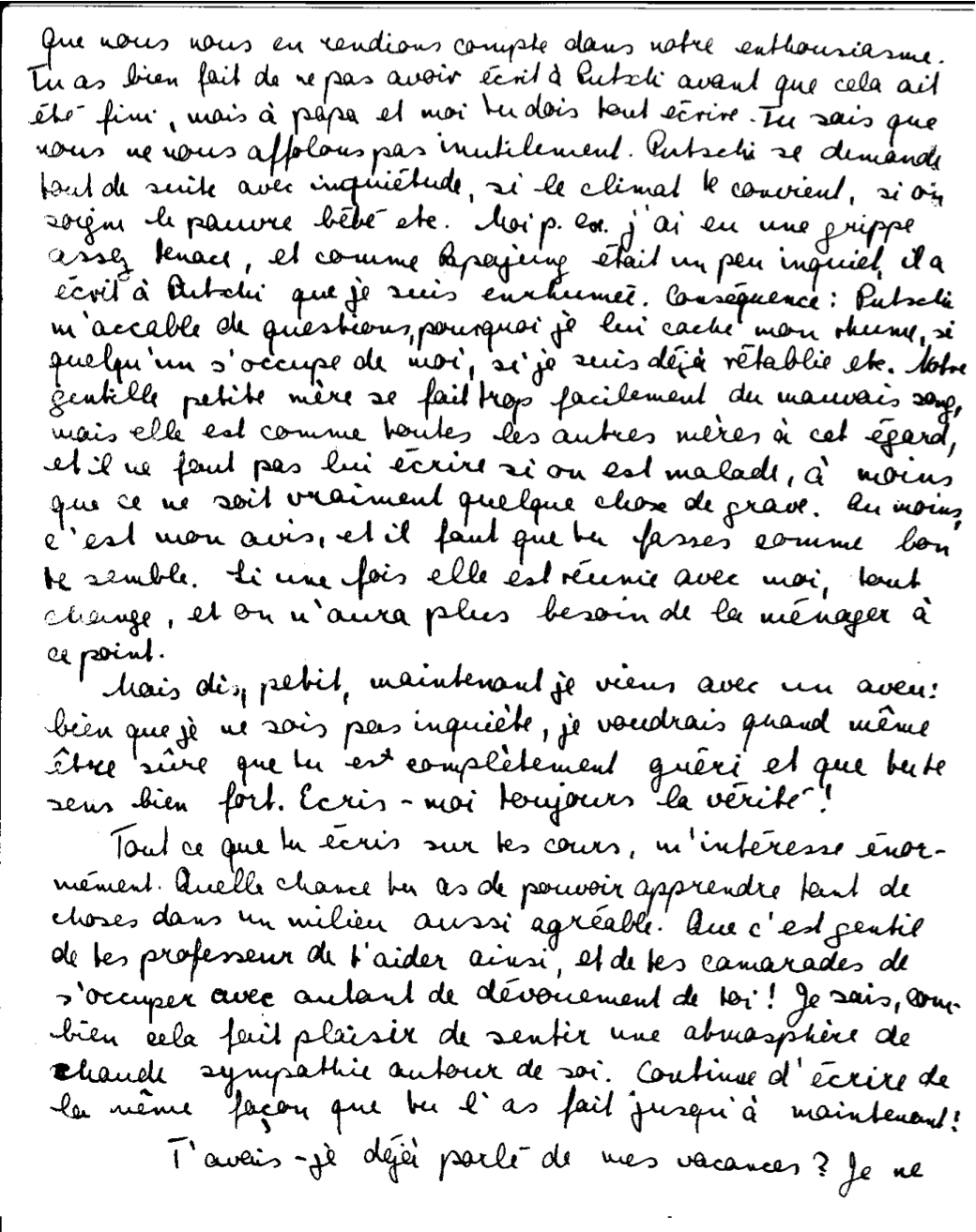 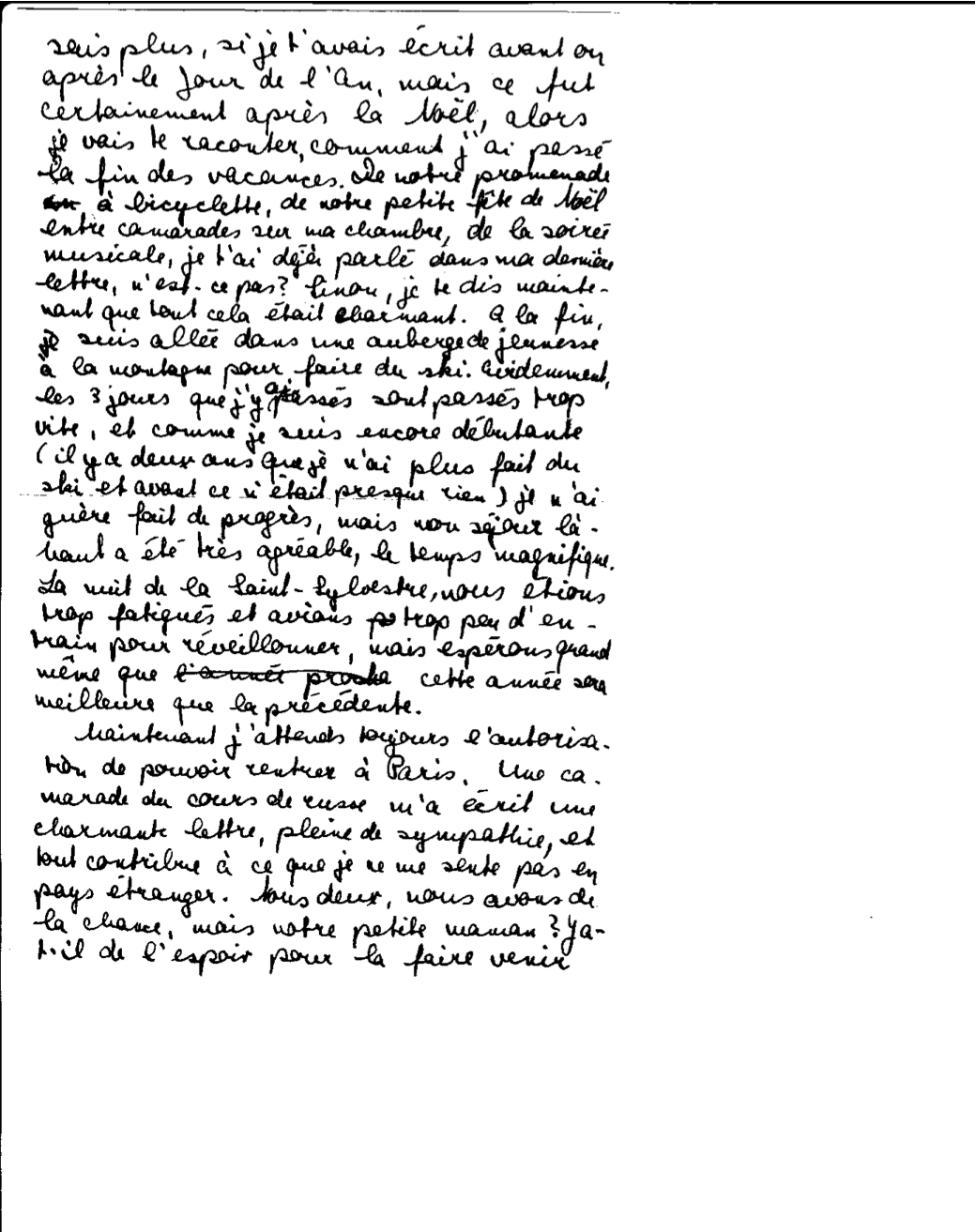 And why shouldn’t I write to you in French rather than in English, since you took courses in both in your junior high and high school?

This is my third letter, and I still don’t know if the other two reached you, and (I don’t remember) the date of the last one.  You see that your sister is rather distracted, and you shouldn’t resent me for it. Personally I can’t complain, but all this atmosphere of a Europe at war isn’t calming at all, and my nerves have been quite tested recently. And then I’m also writing more or less the same thing to lots of people, Dad, Mom, friends, etc, and to tell the truth, I don’t remember if I wished you everything good for the New Year.

I’m always thinking of my “little brother” in America, and if I don’t write, it’s not that I’m thinking of you any less. Your letters give us all much pleasure. I have the two letters written to Mom, and the first written to Dad. There was nothing in them specially for me, but “(German phrase here that we're getting translated)... that doesn’t matter, ……”, right?

Each of your letters confirms my conviction that you are living in a little paradise there, and that now you will apply yourself successfully. Your illness wasn’t serious, right? I think it’s natural to have a little fever at the beginning, with such an important change of climate and environment, etc. We don’t realize how all that excitement is exhausting when we’re so enthused about it. You did well not to have written about it to Putschi (Mom) before you got better, but to Papa and to me, you must write everything. You know we don’t get all upset without cause. Putschi immediately and anxiously asks herself if the climate agrees with you, if the poor baby is being taken care of, etc.  I, for example, had a nasty flu, and since Papajung was a bit anxious, he wrote to Putschi that I had a cold. Result: Putschi showers me with questions, why did I hide from her that I had a cold, is someone taking care of me, am I better now, etc. Our nice little mother gets upset too easily, but she is like all other mothers in this regard, and so we shouldn’t write her that we are sick, unless it’s something serious. At least, that’s my opinion, and you must do as you see fit. If and when she comes to me, all will change, and we won’t need to pussyfoot around her feelings quite so much.

But tell me, since I’m now admitting this, even though I’m not really worried, I would still like to be certain that you are completely recovered and you really feel strong. Always write me the truth!

Everything you write about your courses interests me enormously. How lucky you are to be able to learn so many things in such a pleasant environment. How nice your professor is to help you in this manner, and your friends to take care of you with such devotion! I know how pleasant it is to be in an atmosphere where one is enveloped in such warm affection. Continue to write just as you’ve been doing!

Did I write about my vacation? I don’t remember if I wrote you before or after New Year’s, but it was certainly after Christmas, so I will tell you “how I spent my vacation”. About our bike trip, our little Christmas celebration, amongst roommates. I already wrote you about our musical evening, right?  If not, I’m telling you now that it all was great (“charming”). At the end, I went to a youth hostel in the mountains to ski. Obviously, the 3 days I spent there passed too quickly, and since I’m still a beginner, (I haven’t skied in two years and before that almost not at all) I’ve barely made any progress, but my stay there was very pleasant, and the weather fantastic. New Year’s Eve we were all too tired and we weren’t in good enough shape to stay up, but we still hope this year will be better than the last.

Now I’m waiting for authorization to be able to go back to Paris. A friend in my Russian course wrote me a charming letter, full of affection, and everything adds up to my not feeling I’m in a foreign country. The two of us are really lucky, but our little mother?  Is there any hope that she can come to you?  I don’t think so. But after the war, life must return to normal. If only she doesn’t suffer too much here on in.

What did you do for Christmas, how did you celebrate New Year’s? “Daddy, what will we do for New Year’s”, do you remember? How nice it was at our house, when the entire family came for holidays! But let’s not complain! Let’s be happy about our fate, which is still among the better ones.

How strange it is that your friends have only a vague idea about Europe. But really, it’s very understandable. What did we know about America before the emigration question came up? We were perhaps more savvy about geography than there, but still, we didn’t have precise notions, at least with regards to the less important areas.

Send me photos! As many as possible, okay? That would make me very happy.

So, be well, you lucky little dog (Glückspilz), and don’t forget to write.

This letter is a little bit hard for me to read. Putti is so carefree and cautiously hopeful. She is not oblivious to the war raging near her, but she speaks of New Year’s celebration and hoping that this year will be better than the last. She is concerned about her mother’s well-being, but seems convinced that it will be just a short time until she can have her mother living with her (where she won’t have to worry about tiptoeing around her feelings).  I do love the advice she gives to Opa- “Don’t tell Mother!”

The part that makes this letter hard to read is because we know that all of Europe becomes tangled in the war... to include France. However, in this letter, no one has a clue what is happening. And how could they?

For some of these letters, Jason gives me some supplementary reading that gives me insight into what is happening in the war- a lot of it has been sort of peripheral stuff in terms of our story: fighting on the Russian borders, u-boats torpedoing various ships, etc. But the information for this day was quite fascinating.

On January 10, 1940, a German plane crashed into Belgium. This is called the Michelen Incident. This plane was a small, private plane with just two officers who were traveling to another base. No one was shooting at it, they didn’t go in illegal skies, they just got lost in a series of fog banks. This minor weather problem steered them off-course, and ultimately they made a crash landing. One of the officers happened to have top-secret files about an invasion of France that was supposed to happen following a series of events to be kicked off January 17th. The plane crash resulted in the sharing of this top-secret information, which inevitably delayed the invasion of France to May of 1940. For a general article about this event, visit this site.

Isn’t that just bizarre? What would have happened differently if France were invaded sooner? Did France realize the inevitability of an invasion, or was this their wake-up call? So little did Putti know that her freedom she felt lucky to have may have been bought a little more time, borrowed time, by chance of a plane crash, by chance of fog.