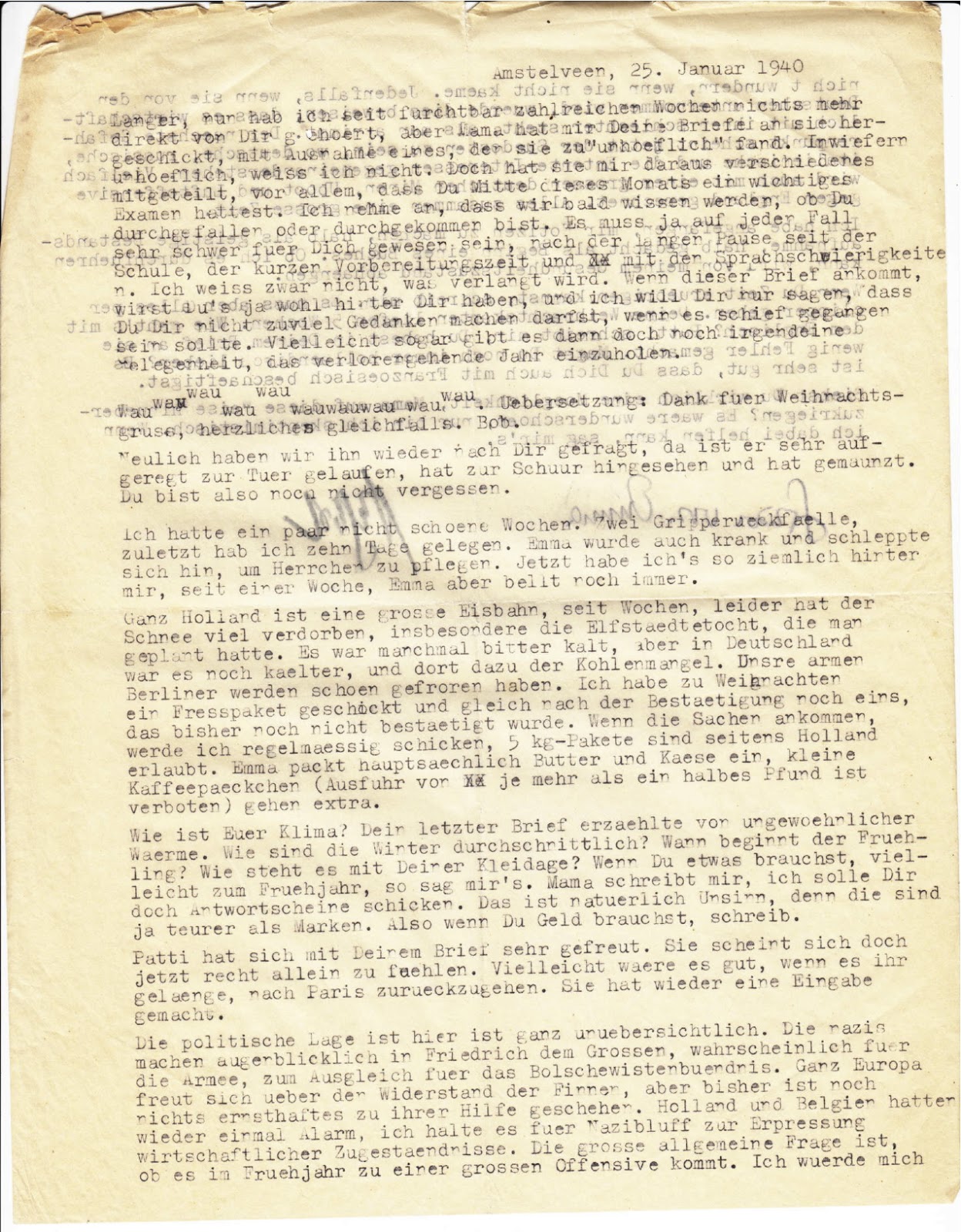 Tall one, I just haven’t heard directly from you for terribly many weeks, but Mama sent along to me your letters to her, with the exception of one that she found too “impolite.”  Impolite how, I don’t know.  Anyway, she shared with me a few things from it, above all, that you have an important exam in the middle of this month. I take it we’ll know soon whether you’ve failed or passed. It must have been very hard for you in any case, after your long break from school, the short time you had to prepare, and with the language difficulties. I certainly don’t know what is required. By the time this letter arrives, you’ll have it all behind you, and I just want to tell you that you don’t need to think too much of it if things have gone downhill. Maybe there will even be some other opportunity to make up for a lost year.

Recently we asked him about you again, at which he ran excitedly to the door, looked at his leash, and whined. So you are still not forgotten!

I had a few not-so-good weeks. Two flu relapses, for the last one I was laid up for ten days. Emma got sick and dragged herself around to nurse hubby [Herrchen: literally “little mister.”] Now it seems to be behind me, but Emma still suffers.

All of Holland is a big ice rink, for weeks, unfortunately the snow has ruined a lot, particularly the Elfstaedtetocht [“Eleven Cities Tour,” Wikipedia tells me this is a big speed skating competition in the Netherlands] that had been planned. It has been bitterly cold at times, but it was even colder in Germany, and the coal shortage on top of that. Our poor Berliners will have frozen nicely. For Christmas I sent a food packet, and just after the acknowledgment [of it], another one, that as of yet hasn’t been acknowledged. If the things are getting there, I will send them regularly, 5 kg packets are allowed from Holland. Emma primarily packs butter and cheese, little packs of coffee (export of more than half a pound is forbidden) are extra.

How’s your climate? Your last letter told of unusually warm weather. How are the winters on average? When does spring begin? How are you doing on clothes? If you need something, maybe for spring, let me know. Mama writes to me that I should just send you international reply coupons [I assume this would allow Tom to write back to his father for free]. That’s nonsense, of course, because those are more expensive than stamps. Well, if you need money, write.

Patti was very happy to get your letter. She seems to be feeling really alone now. Maybe it would be good if she got the chance to go back to Paris. She made another entry again.  [Not sure if this means, to France.]

The political situation here is quite complicated. The Nazis are currently using Frederick the Great [reference to Prussian military culture?], probably for the army, to counterbalance Bolshevik camaraderie. All of Europe is happy about the Finnish opposition, but as of yet nothing serious has happened to help them. Holland and Belgium were on alert again, I consider it a Nazi bluff to force economic concessions. The big general question is whether it will come to a big offensive in spring. I wouldn’t be surprised if that didn’t come. In any case, if it was undertaken by the Germans, that would prove that things are worse for them economically than realized. The next danger point seems to be the southeast, where German-, Russian-, Italian- and Entente-interests stand against each other. It’s also made worse by a big German mine. Sub and air offensives are expected against England. Altogether a big time.

I’ve begun to make notes, half as an intellectual exercise, half thinking of the beginning of a book. Whether I can carry it out will depend on the state of my health.

If you have spare time, write to me. It all has to go by clipper, though. Your Christmas cards took 5 weeks. How’s it going with your English? Patti wrote to me that you made few mistakes in your letter to her. Do you still prefer Dutch? It’s very good that you’re also working on French.

Do you really see a possibility of bringing Mama over in this way?  It would be wonderful, I’m just “skeptimistisch” [a mix of “skeptisch,” skeptical; and “optimistisch,” optimistic, I think.  Skeptimistic?] If I can help with that, let me know.
August

Oh how I love the parental dynamics. Ella didn’t send the “impolite” letter to August. HAHAHA!! Oh man. We know about this impolite letter, because she just fussed at Opa about it on January 20th. I would LOVE to know just how impolite it really was. August gets completely deprived of a letter via Ella’s censorship. The great thing is- August does not seem overly concerned... or surprised. In fact, he seems mildly amused. At least that’s the tone I read. And while he’s playing the good cop opposite his mother’s bad cop, he mentions the exam that Opa has/had and wishes him luck and hopes for the best, but offers grace and understanding if things don’t work out. It is helpful to be reminded of the learning curve Opa has. I always knew him as incredibly intelligent, proficient in most anything, and never really struggling. Even in his later years, he handled his Alzheimers with such a grace (and Grandmother cared for him with such undeniable diligence) that I still didn’t see him as one who struggled. But he was in college-level classes after a year of emotional and geographical upheaval, and all of it was in a foreign language.

Side note: in seminary there were several students from other countries, notably, Korea who came to study in America. I don’t think I will ever fully appreciate the difficulty that they endured to study a complicated matter in a language that was not even related to their own. How did they do that?! I continue to be in awe of what people accomplish without any support or accolades from their peers.

August seems more relaxed this letter, his finances seem to be a little more steady as he is sending (I assume) Ella packages of food and offers to send Opa money. He talks jokingly about Bob, the dog and how he hasn’t forgotten Opa. Despite the flu that doesn’t seem to go away, things seem to be steady. He’s even started writing notes on what I can only assume was his philosophical work that Opa mentioned.

August is able to share without censorship what is happening in the political/war arena. This is a nice glimpse to get from someone who has an ear to the ground for this sort of thing. What did he know? What didn’t he know? He certainly was aware that things were building to a climax and certainly something was brewing. His hunch was a spring invasion. This is actually spot on. I thought it was odd that he thought that showed how desperate Germany was economically. Why is that? I need a history/war buff to explain that one to me.

Something I did learn while visiting Germany, particularly Nuremberg, was the use of Prussian images and memories of former "glory" when Germanic people were a part of an empire. Hitler and his PR team were very smart about how to hit people in the heart and tug on their nationalistic strings. Germany as it stands is (was) not that old of a country- but Hitler was able to find a way to create feverish patriotism by adopting the Prussian story of Frederick the Great as his own sort of lineage.

In his news update, August alludes to the German sub attacks. The U-boats were daily targeting ships and testing the waters even for neutral countries in their efforts to stop all help to any resistance against German control. What August didn’t know was that from January 18-24, 255 Polish Jews were arrested at random in Warsaw, taken out to Palmiry forest and shot.

In the meantime, the Germans were formulating their answer to what they called the “Jewish Question” by appointing Reinhard Heydrich to the task. This guy. I read a whole article on him and wish I could unread his existence. Hitler apparently called him “the man with the iron heart.” That gives you an idea of the kind of guy he was. Not nice.

And as the solution for that “problem” was being weighed.. August weighed in on the solution for the problem of Ella’s safety. He responded to some idea or plan Opa had with a mixture of optimism and skepticism. Hope and reality. Skeptimistic... I am totally using this mash-up in my future vocabulary. It should be a word. It makes sense- it's that feeling we have when we know that things don't look good- but we have this nagging hope that maybe, just maybe, it'll all work out.
Posted by Sarah Snow at Tuesday, August 11, 2015