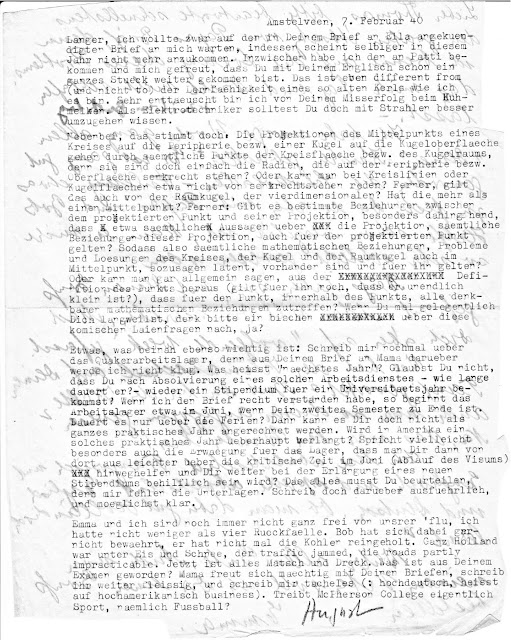 Original Letter to Opa from August 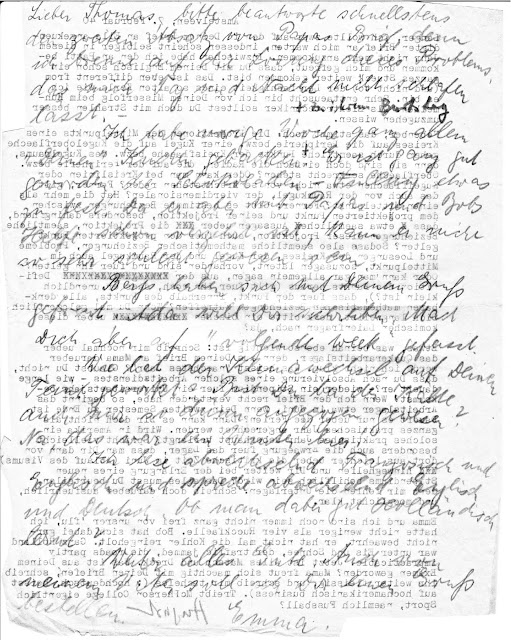 Translation by Allie- August to Opa:
Amstelveen, February 7, 1940
I’ve long awaited the letter you promised me in your letter to Ella; it didn’t seem anymore like it was going to arrive this year.  Meanwhile, I got your letter to Patti, and was happy to see that you’ve come a good bit farther with your English. That’s sure different from (and not to) the learning capacity of such an old guy like me. I’m very disappointed to hear of your cow-milking failure. As an electrical technician you should know better how to handle “emitters.”
Speaking of which: the projection from the center of a circle to the perimeter, or rather that of a sphere to the sphere’s surface, go through all points of the circle’s surface or the area of the sphere, since it’s simply the radii that are perpendicular to the perimeter or surface? Or can one really not talk about being “perpendicular” with lines in a circle or a spherical surface? Furthermore, does that also go for the “Raumkugel,” the four-dimensional sphere? Does that have more than one center? Furthermore: are there certain relationships between the projected point and its projection, especially getting at that all statements about the projection, all the relationships of this projection, also apply to the projected point? So that all the relationships, problems and solutions of the circle, the sphere and the “Raumkugel,” also at the center point…exist and apply to it? Or can one say in general, using the definition of a point, that for the point, inside of the point, all imaginable mathematical relationships meet? When you’re bored sometime, think a little about these strange layperson’s questions, OK?
Another thing that’s nearly as important: tell me again about the Quaker workcamp, because I’m not clear on that from your letter to Mama. What do you mean by “next year”? Don’t you think that after completing that kind of service—how long does it last?—you’ll get a stipend again for a year at the university?  If I understood your letter correctly, the workcamp begins in June, when your second semester is ending. Does it only last for the break? Then it can’t count as a whole practical year for you. Is that kind of practical year even expected in America? Don’t considerations also especially favor the camp, given that from there someone will be able to help you more easily though the critical time in June (when your visa expires) and be helpful to you in getting a new stipend? You have to consider all those things, because I don’t have all the information. Explain it in detail, and as clearly as possible.
Emma and I still aren’t totally free of our flu, I had no fewer than four setbacks. Bob didn’t prove useful at all—he didn’t even bring in the coals. All of Holland was under ice and snow, the traffic jammed, the roads partly impracticable (impassible?). Now it’s all slush and muck. What came of your exam?  Mama is always so happy to get your letters, continue to write to her diligently. Write to me “tacheles” (: high German, means business in high American.) Does McPherson College have sports, namely soccer?
August
Translation by Rosemarie: Emma to Opa

Dear Thomas,  please reply as soon as possible to the second paragraph of Papa’s letter, because I am “burning up “ for the resolution of the problem, that I cannot sleep days or nights (Ron, burning up to know , is a common expression, if you want to have the answer, so it keeps you up at night)

Last week, all by myself I baked YOUR cake. It came out pretty well, only the chocolate filling was a bit too solid. (I think a bit too dry would be a better translation) But since it was eaten with help from Papa and Bob it could have not been too bad. Borgs were happy about your greetings. Ada will write to you. Be prepared for the following week!   How did the change of climate affect your complexion?

Were you dressed that lightly, when it was so cold? Well, we had quite a winter here! I alternate reading French and English, and speak English and German. I wonder if that helps learning Dutch?

Again all the best. My father said to tell you hello.

This letter will be sent today, because Papa again is laying on his nose, or rather another body part in his bed. (lying down on one’s nose means ill and resting) The doctor came yesterday, it is a flu infection, nothing dangerous. The kidney is ok now, which is a big relief to me.  After thawing and slush, now since yesterday frost and ice, even Bob is sliding around. Is it cold there? Do you have enough underwear?


Opa got three letters written on February 7th, from his mother, father, and stepmother. Seems a little overwhelming, but it is funny how different each one is. Ella’s letter is full of updates of friends, love sent from her heart and family members. August spends half his letter talking about something technical… and I’m not even sure if it’s a genuine question or if there is a nerd joke in there I’m missing. It took me a few reads to realize that Emma was making a joke about August's rambling about physics or whatever when she said she was losing sleep over the question. That really made me laugh when I realized it. She is also wondering if he has enough underwear. heeheehee. It made me giggle. She may be the "evil stepmother" but she's kind of funny. Why is his stepmother asking about underwear? Maybe long-johns? Not sure.

The Quaker labor camp that August is referring to is something interesting. I’m not sure which specific program Opa was looking at, but this link here, will give you a good example of one location that could possibly have been what he was talking about. It is a short article and an easy read, but basically this camp was run as a self-sustaining hostel that provided refuge and training in life skills for refugees who needed a place to stay and a place to get their grounding in a new country. The whole thing was initiated by the Quaker group in Iowa in relationship with the American Friends Service Society. So it would make sense that Opa would know about this particular opportunity and be interested in a summer’s stay there. Here is another link that is another example of what Opa might have been looking at. This would have been a different type of camp, perhaps more in line with Opa’s situation that he needed a place to work for the summer.

The flu is serious business for August and Ella- they keep being knocked out by it, and it seems they won't fully recover until the earth around them thaws out.

But, the most important question is clearly: do you have enough underwear?
Posted by Sarah Snow at Monday, August 17, 2015