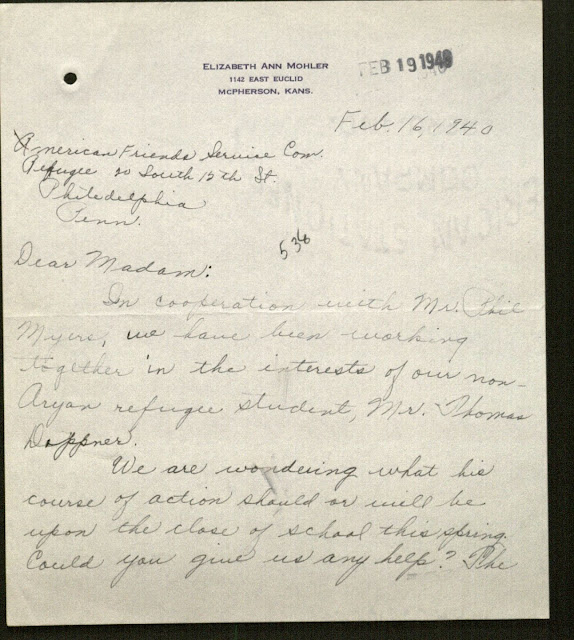 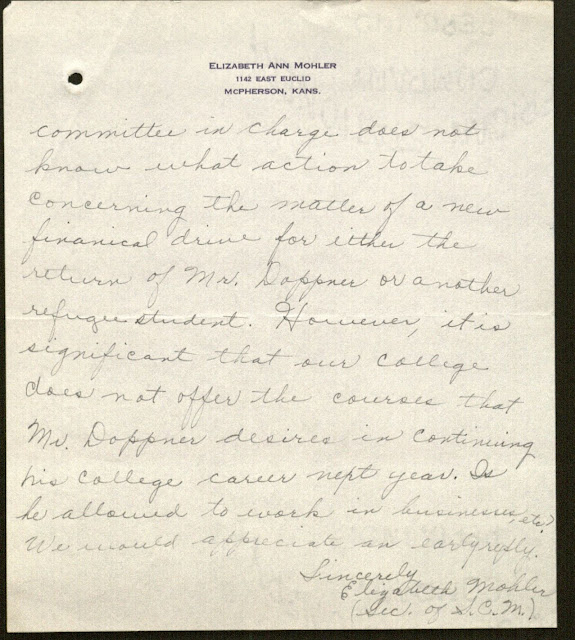 In cooperation with Mr. Phil Myers, we have been working together in the interests of our non-Aryan refugee student, Mr. Thomas Doppner.

We are wondering what his course of action should or will be upon the close of school this spring. Could you give us any help? The committee in charge does not know what action to take concerning the matter of a new financial drive for either the return of Mr. Doppner or another refugee student. However, it is significant that our college does not offer the course that Mr. Doppner desires in continuing his college career next year. Is he allowed to work in businesses, etc.? We would appreciate an early reply.
Sincerely,
Elizabeth Mohler
(Sec. of S.C.M)

Elizabeth Mohler from McPherson college is writing to the American Friends Service Committee (AFSC) to find out if Opa is still interested in being around for another year despite the fact that the school does not have his preferred course of study.

A few things stick out to me in her request for advice/information. She seems to be (understandably) a little bit oblivious to the tenuous nature of Opa's stay in the USA. As of right now, Opa is in the country on a temporary visa as a student. His stay there rests in the continued support by the school and status as a student. I wonder if Opa alluded to his desire to study engineering and the group figured he was transferring? I think it is a little odd they didn't just ask him... However, on the flip side of this- she is being quite proactive. They are trying to help as many people as they can, and if Opa transfers to another school, then McPherson can support another refugee. She is writing about the next fall in February... she's on her game.

Also, I realize she wondered if he could work in a business, I think she is also trying to see if he can be supported or support himself otherwise so that McPherson can support another student. It actually makes a little more sense to me now.

In the meantime I'm thinking about Opa. He's only been in America since November, about three months(!!), and people have supported him, written letters on his behalf, raised scholarships for him, and are preparing to raise scholarships for him the next year if he wants them. Opa has had about three months to turn classroom English into functional conversational English. Opa has had about three months to figure out where he lives, catch up on his studies (he missed half the semester), inquire into getting his mother to the US, and writing all his letters he's been asked to write (of which few seem to be making it to their destinations). Oh and I think he has a job. I'm not even sure he had time to think about transferring to another college. I wonder what his game plan was. Was he hoping to transfer after one year? Two?

I'm just overwhelmed with how ahead of everything you had to be to keep things running smoothly. If you missed one deadline, one turn in the process, you could be set back indefinitely. How does someone look so far into the future while still adjusting to the present? How overwhelming it must have been for Opa.

So I guess even though at first I thought Elizabeth was trying to shoo Opa away, I think she was actually thinking of his best interests, and doing so ahead of time so that if Opa did transfer, the school could help another refugee. The question was never "Will we do the hard work?" It is more: "Does this man still need our hard work?" And I don't know what the reply to this letter is yet, but I imagine it is unequivocally YES. And thank God these folks weren't afraid to work hard to help others.
Posted by Sarah Snow at Thursday, August 20, 2015