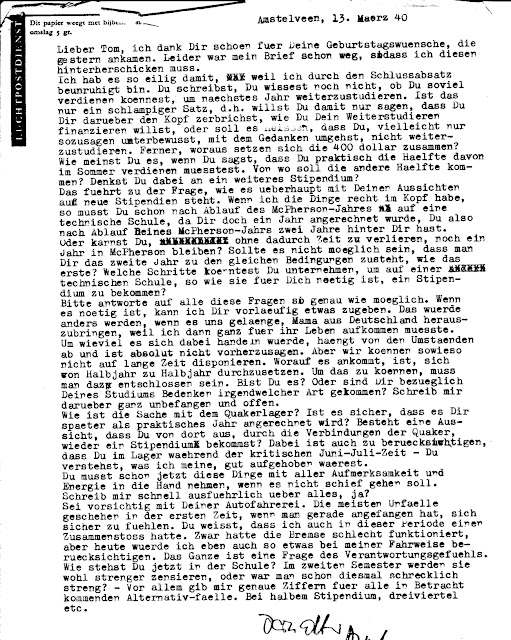 Dear Tom,
I thank you for your birthday wishes, which arrived yesterday. Unfortunately my letter was already gone, so I have to send this one now.

I am in a hurry with it, because the closing sentence in your letter worried me. You write, you did not know yet, if you can earn enough, to continue your studies next year. Was that just a careless (sloppy) sentence, or are you trying to say that you are having headaches about how to finance your further studies, and does it mean that perhaps that unconsciously nurture the idea not to continue? In addition to that what do the $400.00 consist of (I think he means what would be covered with that). What do you mean, when you say you would have to earn half of it in the summer? Where will the other half come from? Are you thinking about an additional scholarship? Which leads to the question, how are your chances for a new scholarship?

If I have things straight in my head you have to, after the Mc Pherson year has passed, attend a technical school, and because you were credited with one year, will have 2 years behind you after McPherson.
Or can you, without losing time, stay another year at McPherson? Could it be possible, that you can stay the second year under the same conditions as the first? What steps could you take to get a scholarship to attend a technical school, which will be needed for you?

Please answer all these questions in detail.  If needed, I could for the time being, add some to it. (I think he means money) That would change, if we succeed to get Mama out of Germany, because I would have to support her totally. How much that might be depends on the circumstances, and is absolutely not possible to foresee. But we cannot make any long term plans at all anyways. What is important is, to push through (survive) from one half year to the next. And to be able to do that one has to be determined! Are You?
Or do you have any doubts in regards to your studies? Write to me openly and uninhibited about that!

What is the situation with the Quaker camp?  Are you sure, that later it will count as a practical year for you? Is there a chance, from there, through the Quaker connection, to get a scholarship? Also taking into account, that you would be at the camp during the critical “June and July” time, you know what I mean, and be well taken care of.

Already now you must take these things into your hands, with all attention and energy, so nothing will go wrong! Please write to me in detail about all this, yes?

Be careful driving a car. Most accidents happen in the early times, just as one starts feeling confident (secure). You know that I during that period had a collision. Actually, the brake malfunctioned, but today I would have taken something like that into account, while driving. The whole thing is a question of responsibility. How are you doing in school? I assume they will give stricter (Stronger) marks or has it been terribly strict already? Most of all give me exact figures for all alternative conditions (situations).
For one half a scholarship, and three quarters, etc.

This anxiety ridden letter made it all the way across the Atlantic and half the United States into Opa's hands. I'm absolutely sure it was written in complete and total concern and care for Opa's future and well-being.

However. If I had received this letter from across the Atlantic ocean and half the continent- I would perhaps have had to breathe in and out and count to ten... or maybe yelled out in annoyance. After everything that Opa had done and been responsible for, here was a letter with nothing but question marks and a frantic feeling of the other shoe dropping. This might just be my knee jerk reaction, I know August sincerely cared and was genuinely concerned that his son would lose everything he had worked for.

The sensitive June-July time that August mentioned is (I'm making an educated guess) that time when his current visitor's visa expires. August shows his confidence in the Quakers by his hope that Opa will be under their care and watchful eye in that time.

The main gist of this letter is August trying to figure out what Opa's next step is- and seeing how he can be a support in that. I think it is interesting that a lot of people are thinking about Opa's future right about this same time frame.

I think Opa may have resented August's comment about supporting Ella if she does make it out of Germany. August was supposed to be paying alimony and child support after the divorce, and according to Helene (Patti's daughter)- the general knowledge was that August did not keep up with that support.

Either way- anxiety travels even over the decades, as I see this letter today and get an anxious feeling from it. I understand it, if Opa were my son and I knew he had the chance of being shipped back to Germany just as the war was ramping up- I'd be pretty anxious about it too.

Talk about a lot of pressure- don't just keep your studies up- make sure you don't get deported back to Nazi Germany!
Posted by Sarah Snow at Thursday, August 27, 2015