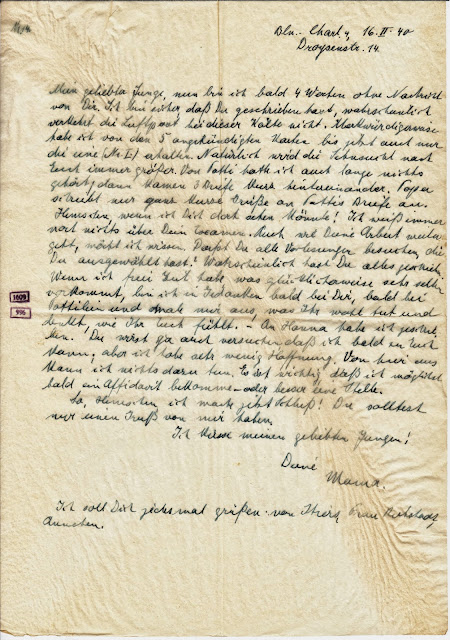 Original letter from Ella to Opa

By now I have been without a word from you for almost 4 weeks. I am sure you have written, perhaps the airmail delivery does not work because of this brutally cold weather. Strangely enough that also of the announced post cards, as of now I have only received one. (Nr 1)

Naturally my longing for all of you is growing stronger and stronger. I did not hear from Patti for a while, then came 3 letters close together. Papa adds only short greetings to Patti’s letters. Henschenboy if only I could see you!

I still do not know anything about your exams!
Also how your work is going, I would like to know. Are you allowed to attend all the lectures you have chosen? Chances are you have already written about all that.

Whenever I have some free time, which luckily does not happen very often, in my thinking I am with you and Pattilein, and imagine what all of you are doing, what you are thinking and how you feel.

I did write to Hanna!! I know you will also try that I can come to you, but I have very little hope. From here there is nothing one can do at all. It is important that I have an affidavit soon or employment.

So, henschenboy now I will close, but you will at least receive a short note from me .

I kiss my beloved boy,
Your Mama

I am to always tell you hello from Stiers, Mrs Ruhstadt and Ann’chen

Here is a letter from Ella, who is clearly less-informed inside Nazi Germany where open communication is much more difficult.

This is sort of an archetype of Ella’s letters. Waiting for word from Opa, Patti, August, anyone outside her controlled universe of Berlin… She asks about Opa’s work, his exams (he really hasn’t told her yet?!), and anything else he wishes to share. In the meantime Opa likely has written her - but the war maneuvers and censors are likely slowing the mail delivery.

Ella keeps busy to keep her mind off the homesickness she has for her children. She writes to send her love. The end of the letter includes the usual greetings from the Stiers (her sister and brother-in-law, Martha and Eric- Opa’s aunt and uncle), Mrs. Ruhstadt (her neighbor), and Annchen (Opa’s aunt, August’s sister).

I keep thinking of Ella, alone in her apartment. She misses her children. She has to be absolutely frightened as a Jewish woman living in one of the political epicenters of Hitler’s reign. She has witnessed Krystallnacht, public shaming of Jews in the squares, rumors of disappearing opponents to Hitler’s regime, propaganda ramping up in offense against Jews and other so-called unlovables. She has seen Jewish businesses boycotted, she has been victim of the strides made to financially ruin the Jews. She still has work, and thankfully so, as her busy-ness keeps her from thinking about all these things. She wants nothing more than to be with her children, and away from this hell. But all this fear that she must have, she has to keep bottled inside, or confide carefully with neighbors and family.

So she writes her son, even though she hasn’t heard from him in four weeks, and asks him to write about the good things, the mundane things, the freedom he has. God- my heart aches for her.
Posted by Sarah Snow at Wednesday, August 19, 2015