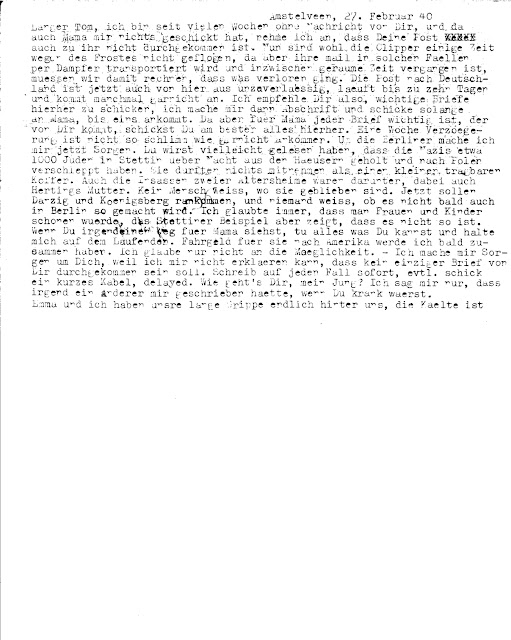 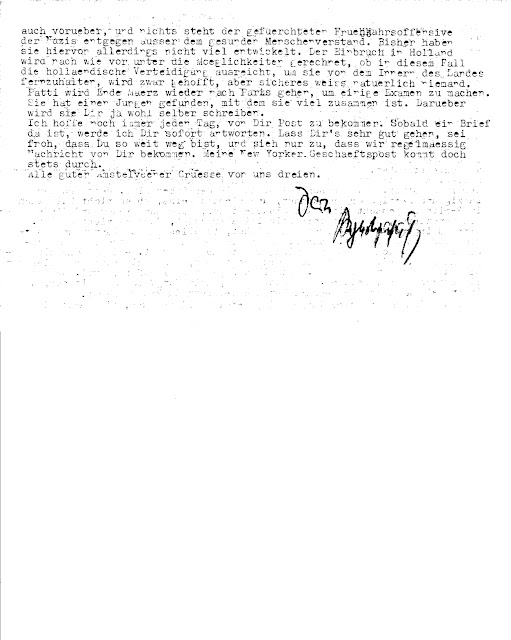 Amstelveen, February 27, 1940
Tall Tom, I haven’t gotten any news from you in weeks, and since Mama hasn’t sent me anything either, I take it your mail didn’t get through to her either. The clippers haven’t gone for a while now due to the frost, in which case your mail is being transported by steamer, and since a fair amount of time has gone by in the meantime, we have to figure that something was lost. Mail to Germany is unreliable from here too now, takes up to ten days and sometimes doesn’t arrive at all. I suggest you send important letters here, then I’ll make copies and send them to Mama until one gets there. But since for Mama every letter from you is important, you’d best send everything here. A one week delay isn’t as bad as not getting there at all. I’m now worried about the Berliners. You might have read that the Nazis took around 1000 Jews in Stettin from their houses overnight and carried them off to Poland. They weren’t allowed to bring anything but a small, portable suitcase. Also the occupants of two old folks’ homes were among them, including Herting’s mother. No one knows where they are. Now it’s supposed to happen in Danzig and Koenigsburg, and no one knows if they won’t do the same soon in Berlin. I always thought that women and children would be left alone, but the example of Stettin shows that that’s not so. If you see any way for Mama, do everything you can and keep me updated. I’ll soon have travel money together for her to get to America. I just don’t think there will be the possibility. I’m worried about you, because I just can’t explain why not one of your letters has gotten through.In any case, write immediately, perhaps send a short cable, delayed. How’s it going with you, my boy? I just tell myself that someone else would have written to me if you were sick.
Emma and I finally have our long flu behind us, the cold weather is also past, and there’s nothing stopping the feared Nazi spring offensive except for healthy common sense. Up to now they really haven’t built much up. The break into Holland is counted as among the possibilities; whether in this case the Dutch defense would be enough to keep them away from the inside of the country, is certainly the hope, but of course no one knows.
Patti is going to Paris again at the end of March to take some exams. She’s found a boy she’s together with a lot. She’ll write to you about that herself.
I’m still hoping every day to get some mail from you. As soon as I have a letter, I’ll answer it immediately. Hope you’re doing very well, be happy that you’re so far away, and just see to it that we get regular news from you. My New York business mail always comes through reliably.
All good Amstelveen greetings from the three of us!
Yours, August.
I feel some anxiety from August in this letter. He is missing his usual aloofness and dry humor. Gone are the engineering questions, the jokes, and the wistful thinking of having a cabin in the woods somewhere in America.

Opa's letters (he is writing them, right?!) are not making it to anyone. August has some theories: the planes aren't flying in the frost, the mail has difficulty getting in and out of Berlin, especially from overseas... Ultimately August admits that he is worried. He's getting mail from his business in New York. Where are Opa's letters?

This shows a sweet side of August where we've mostly gotten philosopher or jokester. August is worried about Opa, and he's heard disturbing news about something happening to the Jews in Stettin. I think this news is a reality check for August. He says "I always thought that women and children would be left alone, but the example of Stettin shows that that's not so." Stettin is an area in Poland just outside the German border. It's not terribly far from Berlin. The area has German roots and somehow the Nazis decided that this German area needed to be free of Jews. They rounded up over one thousand people and literally made them move to another place. They made them march in the freezing cold and snow- and if you recall August's detail- the residents of two nursing homes were among those deported from their homes. Many died in transport. Read this article for more details. This event is a precursor to the deportation to concentration camps. That  is the ultimate "solution" they come up with, this Stettin event was just practice.

The international press picked up the story, and while it was upsetting, nothing seems to have happened in response to it. What did happen was it made August realize the reality of what possibly faced Ella. Ella was in greater danger than he realized, and you could tell he was genuinely worried. He asked if Opa was doing everything he could to get her to the US (even if he thought it was unlikely she'd be able to) and he said he would soon have travel money for her.

August gets a little more like himself when he references Patti's "boy she's together with a lot." Ha- what an understatement. August says that Patti is due to travel to Paris in March to take her exams. They don't know the Nazis are planning to go ahead with that Spring offense as August expects, and that Hitler will be celebrating his victories in Paris by June.

Things are feeling more real. Patti's letter mentions the inevitability of the war even in the context of her love. August recognizes that Opa, even if sick and alone in America- is better off being so far away from all this.

Opa reading this... was he getting their letters before they got his? And if so- it had to have been so hard and frustrating, they were worried, danger was closing in- and he was so so far away.

Also- side note: in thirty eight years, Opa's first grandchild will be born. How's that for perspective?
Posted by Sarah Snow at Saturday, August 22, 2015