Thank you for your letter of January 18th. The registration number of your mother sounds very high indeed, but since the American Consuls abroad apparently, at the present time, consider the registration date rather than the number, your mother might have better chances than we can see at present. I shall write to our Center in Berlin to get in touch with her and see in which way they can be of assistance to her, or may have suggestions for her immigration. However, I do not have any doubts that we will not be able to get her into this country on a non-quota visa.

I think it would not be wise to try already to find an affidavit for her, as the affidavit probably would become invalid before she could use it, and it is always rather annoying for affiants to go thru all the trouble twice. However, we know very well how extremely difficult it is and how much good luck it requires to find an affiant. The affidavit is valid six months and our Center in Berlin probably shall write us about which time your mother might be able to come to this country and we shall let you know when we think you should send the affidavit.

Of course, we shall let you know everything which might be of interest to you from the report we shall receive from Berlin. If there is anything further you would like us to do, please let us know. 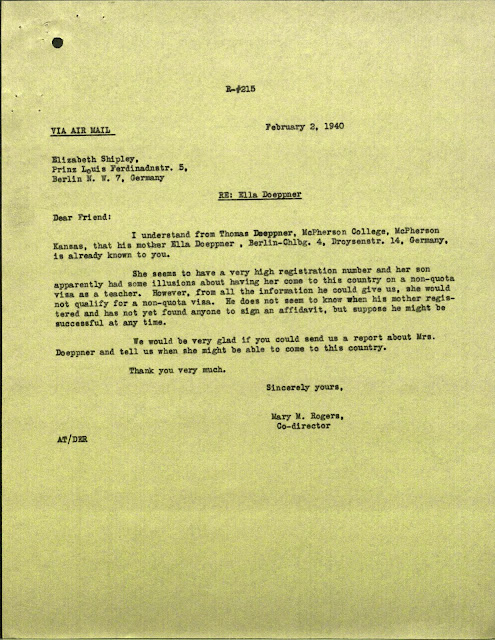 I understand from Thomas Doeppner, McPherson College, McPherson Kansas, that his mother Ella Doeppner, Berlin-Chlb. 4, Droysenstr. 14, Germany, is already known to you.

She seems to have a very high registration number and her son apparently had some illusions about having her come to this country on a non-quota visa as a teacher. However, from all the information he could give us, she would not qualify for a non-quota visa. He does not seem to know when his mother registered and has not yet found anyone to sign an affidavit, but suppose he might be successful at any time.

We would be very glad if you could send us a report about Mrs. Doeppner and tell us when she might be able to come to this country.

Thank you very much.

I cannot imagine what the caseload was for the folks at the AFSC, but within a couple of weeks, there is a reply to Opa’s letter and a letter sent to Germany to inquire of Ella’s situation. Things look bleak, but there are some sparks of hope: the registration date might be more important than the number, and Opa has a little bit of time to come up with an affidavit.

The affidavit is a sort of sworn statement from a sponsor in the United States who will care for (primarily financially) the immigrant. The process of becoming an affiant is not simple. The whole point of the affidavit is to prove that the immigrant will have community and financial support upon arriving to the country. In theory this sounds lovely, but in practice, that means that people have to be interviewed, write letters of acceptance for the person immigrating. It also means that the core family of the affiant has to prove their financial standing. Their bank accounts revealed, assets tallied, and a judgment of their financial stability offered. This is not for the faint of heart, or even for the mildly private. You have to be willing to lay it all out for watchful, discerning eyes. So as frustrated as Opa might be that he is not getting any bites on people willing to sign affidavits, it probably was a little relief to know that it was hard for anyone to do, and that he probably had some time to get it together. The other side of this is that you start to get a feel for the time line that the American Friends Service Committee (AFSC) had in mind. The affidavits last 6 months, and they felt Opa did not need to rush to get one right now. So does that mean they didn’t think there was a chance that Ella would need it sooner than that? I personally would have kept on asking and begging… I have a feeling that’s the course Opa took.

In contrast, the letter to Germany cuts to the chase. Ella has a high registration number, and despite Opa’s wishes that the non-quota visa could be a possibility, it’s a definite no-go. The AFSC worker asks the Berlin Quakers for any information they can give on Ella.