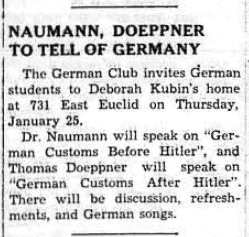 Naumann, Doeppner to Tell of Germany

I love this. The German club is meeting at Deborah's house (unfortunately they were not given a time, so hopefully Deborah's ready). Dr. Naumann is a German refugee who came to McPherson before Opa, and with whom Opa had a nice connection because of their shared experiences. I'm assuming this is a German language club, and they've invited the two "real" Germans to come speak about the culture of Germany.

How fascinating that the culture is necessary to split into two categories: before Hitler, after Hitler. I wonder how Opa's presentation went. Did Opa remember enough of the "before Hitler" to remember the difference? I imagine he did, he was 13 when Hitler was elected.

I couldn't help but laugh and imagine Opa and Dr. Naumann snickering in a corner while the German students sang German songs. I'm probably wrong, I'm sure they were very nice and polite, but come on - they had to be laughing on this inside. Isn't every German laughing when they see the American version of Oktoberfest?
Posted by Sarah Snow at Monday, August 10, 2015