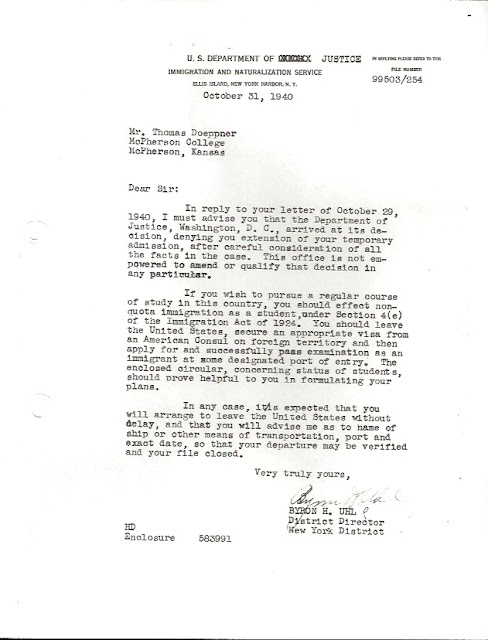 Letter from Byron Uhl at INS to Opa

In reply to your letter of October 29, 1940, I mist advise you that the Department of Justice, Washington, D.C., arrived at its decision, denying you extension of your temporary admission, after careful consideration of all the facts in the case. This office is not empowered to amend or qualify that decision in any particular.

If you wish to pursue a regular course of study in this country, you should effect non-quota immigration as a student, under Section 4(e) of the Immigration Act of 1924. You should leave the United States, secure an appropriate visa fro an American Consul on foreign territory and then apply for and successfully pass examination as an immigrant at some designated port of entry. The enclosed circular, concerning status of student's, should prove helpful to you in formulating your plans.

In any case, it is expected that you will arrange to leave the United States without delay, and that you will advise me as to name of ship or other means of transportation, port and exact date, so that your departure may be verified and your file closed.

Translation: I will be of zero help to you sir, in fact, after reading this letter- you will want to pull your hair out.

I mean, really. First- this guy HAS to hate his job. I hate this letter, I can't imagine being in a position where I have to write multiples of them! Second- I don't think this guy cares if he is helpful to Opa. If you are an Uhl descendent- I'm sorry - he might have been a nice guy- but he seems annoyed with Opa and he is ready to close his file and ship him OUT. He recommends the student visa process- which is nice- but infuriating because that is what he was supposed to ENTER on!! That guy at Ellis Island who randomly gave Opa a visitors visa-- grrrr!

The plan all along was for Opa to have his student's visa. He did all of the things that Mr. Uhl is asking- except he did it at the right time and he was able to get to the US. If he leaves now and tries to go through the process again- I have to imagine even Mr. Uhl knows it is close to impossible to gain entry into the US. He's also forgetting that Opa has NO VISA or passport right now. So how is he supposed to travel? Mr. Uhl gave no insight for that- which was Opa's main question other than to ask why he was declined- which Mr. Uhl also couldn't tell him. This letter is useless to Opa other than to state that he has to figure out how to leave. If not ship- I guess by foot or car to Mexico or Canada??

Oh man this letter gets my blood boiling. How did Opa not tear this up and burn it?! "Very truly yours"- baloney.

So seriously. What is Opa supposed to do?