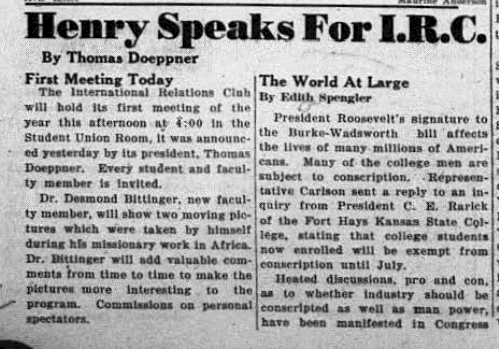 Article by Opa in The Spectator (McPherson college newspaper)

First Meeting Today
The International Relations Club will hold its first meeting of the year this afternoon at 4:00 in the Student Union Room, it was announced yesterday by its President, Thomas Doeppner. Every student and faculty member is invited.

Dr. Desmond Bittinger, now faculty member, will show two moving pictures which were taken by himself during his missionary work in Africa. Dr. Bittinger will add valuable comments from time to time to make the pictures more interesting to the program. Commissions on personal spectators.

The World at Large
By Edith Spengler

President Roosevelt's signature to the Burke-Wadsworth bill affects the lives of many millions of Americans. Many of the college men are subject to conscription. Representative Carlson sent a reply to an inquiry from President C.E. Rarick of the Fort Hays Kansas State College, stating that college students now enrolled will be exempt from conscription until July.

Heated discussions, pro and con, as to whether industry should be conscripted as well as man power, have been manifested in Congress...

Opa is the President of the local school chapter of the International Relations Club. I can't imagine being a leader of a group during a time like this. However, I am so proud of Opa for doing it- it is the perfect time to be discussing matters of international importance. I wonder how Opa felt about their first meeting being about a missionary trip to Africa. I wonder if he was a little disappointed that it wasn't a little more relevant to what was happening in Europe.

When I read the news of conscription, my stomach lurched. I have never really thought about the possibility of my sons being drafted into the military. But for some reason in this context, it became believable, possible, and very frightening.