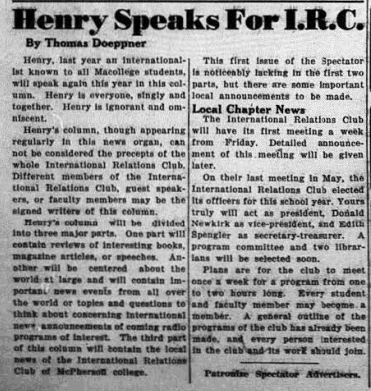 Article by Opa in McPherson College Newspaper: The Spectator

Henry, last year an internationalist known to all Macollege students, will speak again this year in this column. Henry is everyone, singly and together. Henry is ignorant and omniscient.

Henry's column will be divided into three major parts. One part will contain reviews of interesting books, magazines articles, or speeches. Another will be centered about the world at large and will contain important news events from all over the world or topics and questions to think about concerning international news, announcements of coming radio programs of interest. The third part of this column will contain the local news of the International Relations Club of McPherson college.

This first issue of the Spectator is noticeably lacking in the first two parts, but there are some important local announcements to be made.

The International Relations Club will have its first meeting a week from Friday. Detailed announcement of this meeting will be given later.

On their last meeting in May, the International Relations Club elected its officers for this school year. Yours truly will act as president, Donald Newkirk as vice-president, and Edith Spangler as secretary-treasurer. A program committee and two librarians will be selected soon.

Plans are for the club to meet once a week for a program of the club has already been made, and every person interested in the club and its work should join.

Henry speaks is a recurring column written by various members of the International Relations Club, which at this point in time, has Opa for its President. What a fabulous idea! I need to start a column like this! Did any other American parent hear the theme song to "Martha Speaks" when they read the title?? HA.

I am starting to see some common names, Opa's chess friends are with him in this club. Opa is so proactive about speaking and writing about what is going on in the world. He is trying to keep his friends in midwestern America informed, as almost a self-appointed ambassador from Europe. I wish I had joined a club like this in college. Maybe there is one around here that I can join. When people gather and share ideas and experiences, change and community are inevitable. Beautiful!! This brings me so much hope.