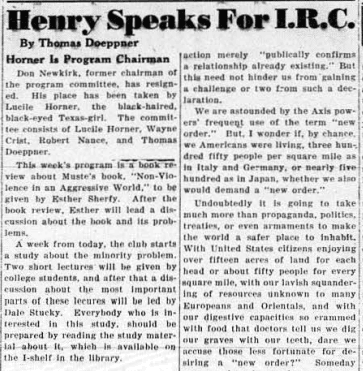 Don Newkirk, former chairman of the program committee, has resigned. His place has been taken by Lucile Horner, the black-haired, black-eyed Texas-girl. The committee consists of Lucile Horner, Wayne Crist, Robert Nance, and Thomas Doeppner.

This week's program is a book review about Muste's book, "Non-Violence in an Aggressive World," to be given by Esther Sherfy. After the book review, Esther will lead a discussion about the book and its problems.

A week from today, the club starts a s study about the minority problem. Two short lectures will be given by college students, and after that a discussion about the most important part of these lectures will be led by Dale Stucky. Everybody who is interested in this study, should be prepared by reading the study material about it, which is available on the I-shelf in the library.
**(missing section)**
action merely "publicly confirms a relationship already existing." But this need not hinder us from gaining a challenge or two from such a declaration.

We are astonished by the Axis powers' frequent use of the term "new order." But, I wonder if, by chance, we Americans were living, three hundred fifty people per square mile as in Italy and Germany, or nearly five hundred as in Japan, whether we also would demand a "new order."

Undoubtedly it is going to take much more than propaganda, politics, treaties, or even armaments to make the world a safer place to inhabit. With United States citizens enjoying over fifteen acres of land for each head or about fifty people for every square mile, with our lavish squandering of resources unknown to many Europeans and Orientals, and with our digestive capacities so crammed with food that doctors tell us we dig our graves with our teeth, dare we accuse those less fortunate for desiring a "new order?" Someday

First- sorry about the missing sections! I'll see if I can't find the rest of it. It's hard to copy all relevant material quickly- sometimes you miss some things!

Opa is writing a little update from the International Relations Club, first with logistics of leadership change and events/discussions and then some updates on the world events.

I can't help but think that Opa is feeling very confident in his identity as a sort of adopted American. He speaks from the American perspective, although he is clearly pointing out some glaring faults - made more glaring by his own knowledge of life inside Nazi Germany. I'm kind of surprised that he isn't more hesitant to share these thoughts of almost sympathy for the people of the Axis powers. He makes a solid point, but he must have confidence that his readers will receive it well. I think his comment on how much land Americans have might be a little skewed by his time in Kansas vs Berlin (people in New York have a different experience, and people in Bavaria aren't cramped). However, his example of the lavish amounts of food is a solid one. Opa almost never knew a life with out rationing. There are likely some folks in Kansas who have just survived the dust bowl who would beg to differ on their food availability. Although maybe now that things were better, they were stuffing and hoarding food because they had gone through a time without.

My favorite line: "doctors tell us we dig our graves with our teeth." That is an expression I had not heard and it is delightfully accurate and fabulous.

Opa might not be completely holistic in his thoughts on the world stage, but he definitely gives the well-fed Americans something to think about, and he does so daringly. I think the general consensus for people not from America is STILL that we eat a lot.
Posted by Sarah Snow at Friday, November 20, 2015