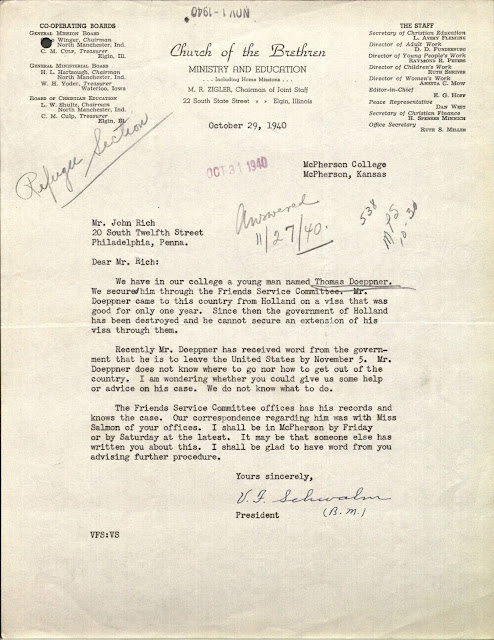 Letter from V.F. Schwalm, President of McPherson College, to John Rich at AFSC

We have in our college a young man named Thomas Doeppner. We secured him through the Friends Service Committee. Mr. Doeppner came to this country from Holland on a visa that was good for only one year. Since then the government of Holland has been destroyed and he cannot secure an extension of his visa through them.

Recently Mr. Doeppner has received word from the government that he is to leave the United States by November 5. Mr. Doeppner does not know where to go nor how to get out of the country. I am wondering whether you could give assume help or advice on his case. We do not know what to do.

The Friends Service Committee offices has his records and knows the case. Our correspondence regarding him was with Miss Salmon of your offices. I shall be in McPherson by Friday or by Saturday at the latest. It may be that someone else has written you about this. I shall be glad to have word from you advising further procedure.

I love Mr. Schwalm. First of all- if you went to college- do you even know the name of the president of your school, much less have the kind of relationship with him where he knows your immigration woes? I am amazed by this community's commitment to Opa- to helping him and supporting him as he pursues his studies and remains in the United States. Even the President is writing to ask for help and information mere days after Opa received his letter. How did he know Opa was in trouble? Did Opa talk to him?

Either way, Schwalm puts his President card on the table for all it's worth and asks what they should do to help Opa stay. You wonder if in social media days Opa would have his own hashtag: #helpTomStay!