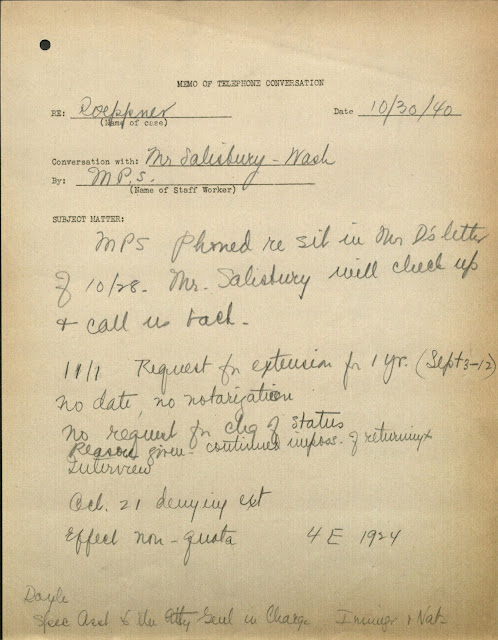 MPS phoned re sit in Mr. D's (regarding situation in Mr. Doeppner's) letter of 10/28. Mr. Salisbury will check up and call us back.

11/1 Request for extension for 1 yr (Sept 3-12)
no date, no notarization
no request for chg of status
reasons given-continued impos.(impossibility) of returning X
interview

Doyle
Spec Asst to the Atty Genl in Charge Immigr. & Nat-
(special assistant to the attorney general in charge immigration and naturalization).

Ok- so here's a memo for Mrs. Hanstein to look at as she processes the madness that is Opa's visa denial. I'll be honest, while I could figure out the shorthand of the notes, I'm not entirely clear on what the information is. It sounds like Opa's first request for an extension did not include a request for a change of status or a date and notarized something or another.  Then it looks like the main reason for denying the renewal was the impossibility of returning to the country of origin. This does sort of make sense because that was part of the Catch-22 of immigration then. You were more than welcome to come if we know without a doubt we can ship you back when we want to. If your country is at war or hates you- well then that makes you stuck here- and we want to be able to kick you out.

So the problem is that the US let Opa in once, and now they've decided he's crossed that threshold from having a country to go home to ... to not having one (Holland falling to German invasion). The problem is that for that very reason- Opa can't go home now- because he has no home to go to. So it seems like the US is stuck. Or worse- they'll just put him on any ship and not care what meets him on the other side. We'll see how this progresses.