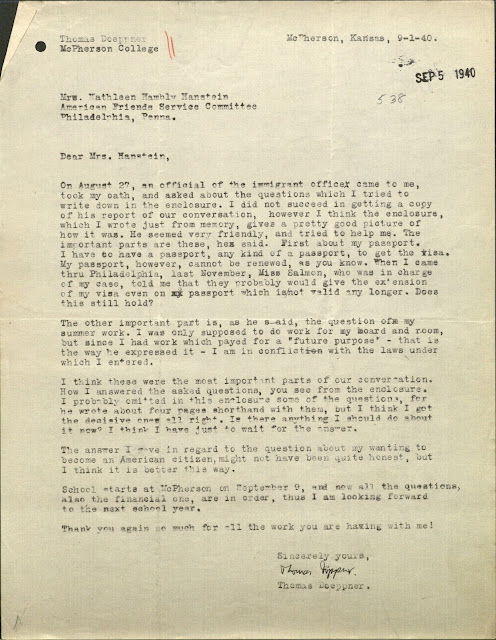 Letter from Opa to Kathleen Hanstein of AFSC

On August 27, an official of the immigrant office came to me, took my oath, and asked about the questions which I tried to write down in the enclosure. I did not succeed in getting a copy of his report of our conversation, however I think the enclosure, which I wrote just from memory, gives a pretty good picture of how it was. He seemed very friendly, and tried to help me. The important parts are these, he said. First about my passport. I have to have a passport, any kind of passport, to get the Visa. My passport, however, cannot be renewed, as you know. When I came through Philadelphia, last November, Miss Salmon, who was in charge of my case, told me that they probably would give the extension of my visa even on a passport which is not valid any longer. Does this still hold?

The other important part is, as he said, he question of my summer work. I was only supposed to do work for my board and room, but since I had work which paid for a "future purpose" - that is the way he expressed it - I am in conflicting with the laws under which I entered.

I think these were the most important parts of our conversation. How I answered the asked questions, you see from the enclosure. I probably omitted in this enclosure some of the questions, for he wrote about four pages shorthand with them, but I think I got the decisive ones all right. Is there anything I should do about it now? I think I have just to wait for the answer.

The answer I gave in regard to the question about my wanting to become an American citizen, might have not been quite honest, but I think it is better this way.

School starts at McPherson on September 9, and now all the questions also the financial one, are in order, thus I am looking forward to the next school year.

Than you again so much for al the work you are having with me! 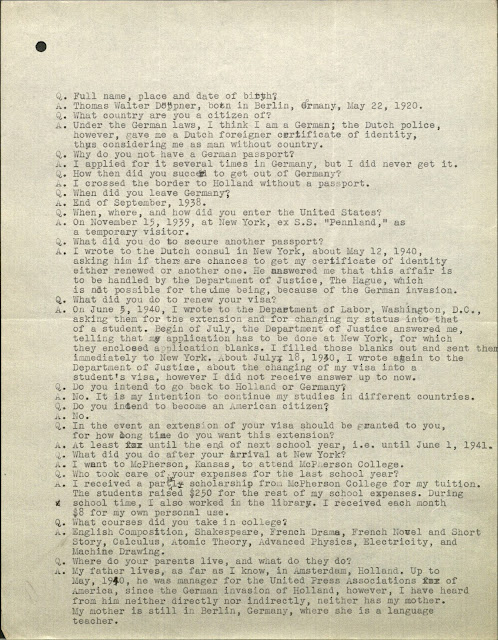 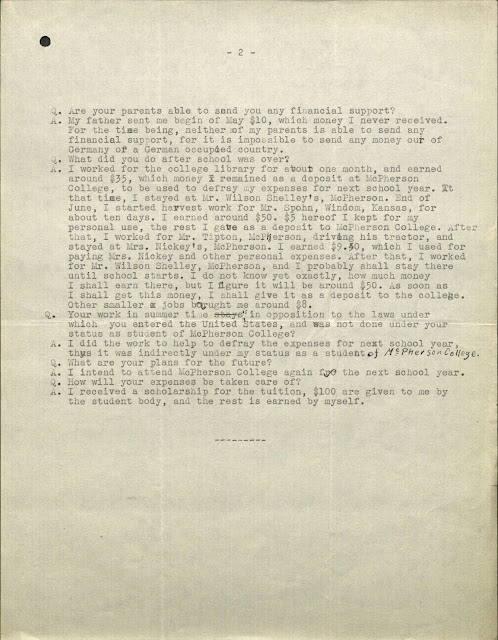 Opa's Record from Memory of his Interview/Questionnaire by INS representative

Q: Full name, place and date of birth?
A: Thomas Walter Döppner, born in Berlin, Germany, May 22, 1920.
Q: What country are you a citizen of?
A: Under German laws, I think I am a German; the Dutch police, however, gave me a Dutch foreigner certificate of identity, thus considering me as a man without country.
Q: Why do you not have a German passport?
A: I applied for it several times in Germany, but I did never get it.
Q: How then did you succeed to get out of Germany?
A: I crossed the border to Holland without a passport.
Q: When did you leave Germany?
A: End of September, 1938.
Q: When, where, and how did you enter the United States?
A: On November 15, 1939, at New York, ex S.S. "Pennland," as a temporary visitor.
Q: What did you do to secure another passport?
A: I wrote to the Dutch Consul in New York, about May 12, 1940, asking him if there are chances to get my certificate of identity either renewed or another one. He answered me that this affair is to be handled by the Department of Justice, The Hague, which is not possible for this time being, because of the German invasion.
Q: What did you do to renew your visa?
A: On June 5, 1940, I wrote to the Department of Labor, Washington, D.C., asking them for the extension and for changing my status into that of a student. Begin of July, the Department of Justice answered me, telling that my application has to be done at New York, for which they enclosed application blanks. I filled those blanks out and sent them immediately to New York. About July 18, 1940, I wrote again to the Department of Justice, about the changing of my visa to a student's visa, however I did not receive any answer up to now.
Q: Do you intend to go back to Holland or Germany?
A: No. It is my intention to continue my students in different countries.
Q: Do you intend to become an American Citizen?
A: No.
Q: In the event an extension of your visa should be granted to you, for how long time do you want this extension?
A: At least for until the end of next school year, i.e. until June 1, 1941.
Q: What did you do after your arrival at New York?
A: I went to McPherson, Kansas, to attend McPherson College.
Q: Who took care of your expenses for the last school year?
A: I received a partial scholarship from McPherson College for my tuition. The students raised $250 for the rest of my school expenses. During school time, I also worked in the library. I received each month $8 for my personal use.
Q: What courses did you take in college?
A: English Composition, Shakespeare, French Drama, French Novel and Short Story, Calculus, Atomic Theory, Advanced Physics, Electricity, and Machine Drawing.
Q: Where do your parents live, and what do they do?
A: My father lives, as far as I know, in Amsterdam, Holland. Up to May, 1940, he was manager for the United Press Associations of America, since the German invasion of Holland, however, I have heard from him neither directly or indirectly, neither has my mother. My mother is still in Berlin, Germany, where she is a language teacher.
Q: Are your parents able to send you any financial support?
A: My father sent me begin of May $10, which money I never received. For the time being neither of my parents is able to send any financial support, for it is impossible to send any money out of Germany or a German occupied country.
Q: What did you do after school was over?
A: I worked for the college library for about one month, and earned around $35, which money I remained as a deposit at McPherson College, to be used to defray my expenses for next school year. At that time, I stayed at Mr. Wilson Shelley's, McPherson. End of June I started harvest work for Mr. Spohn, Windom, Kansas, for about ten days. I earned around $50. $5 hereof I kept for personal use, the rest I gave as a deposit to McPherson College. After that, I worked for Mr. Tipton, McPherson, driving his tractor, and stayed at Mrs. Nickey's, McPherson. I earned $9.30, which I used for paying Mrs. Nickey and other personal expenses. After that, I worked for Mr. Wilson Shelley, McPherson, and I probably shall stay there until school starts. I do not know yet exactly, how much money I shall earn there, but I figure it will be around $50. As soon as I shall get this money, I shall give it as a deposit to the college. Other smaller jobs brought me around $8.
Q: Your work in summer time is in opposition to the laws under which you entered the United States, and was not done under your status as student of McPherson College?
A: I did the work to help to defray the expenses for next school year, thus it was indirectly under my status as a student of McPherson College.
Q: What are your plans for the future?
A: I intend to attend McPherson College again the next school year.
Q: How will your expenses be taken care of?
A: I received a scholarship for the tuition, $100 are given to me by the student body, and the rest is earned by myself. 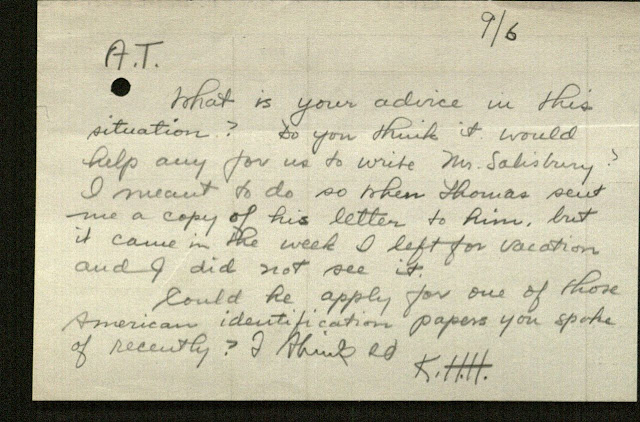 What is your advice in this situation? Do you think it would help any for us to write Mr. Salisbury? I meant to do so when Thomas went me a copy of his letter to him, but it came in the week I left for vacation and I did not see it.

Could he apply for one of those American identification papers you spoke of recently? I think so

Whew- this is good stuff. First: Opa has a good memory to be able to go type up that whole interview with the INS guy verbatim! He also seems to be incredibly poised- unless he inserted his poise when remembering the conversation. Many of these questions would have had me tongue-tied and nervous, and he seemed to answer them like a champ. He has some wisdom and cleverness in how he responds to some of these tricky questions. I feel like he was on trial a little bit, but this guy must have been kind enough to make Opa feel like he was trying to help him.

How about a little light perjury? Opa swore an oath and then told a little lie about whether he wanted to become an American citizen- and I think he was right in discerning that it wouldn't be good to answer yes. Kathleen Hanstein writes to a colleague at the AFSC asking "what do we do with this?"

If you think about it, Opa's situation is really sketchy. If you had any suspicion of him- his story would sound very unlikely. He escaped Germany without a passport. He happened to get an identification paper from a country that is currently under Nazi rule and cannot renew his papers. His father is no longer reachable, and his mother is in Berlin and also unable to help financially. Opa is without country, without papers, and with a bizarre story. If I were him- after this interview- I would be scared out of my mind that I would be deported. The question is - to where?

Opa's downfall is not having a passport- but it's sort of his saving grace too- how could he travel anywhere without one? I'm interested to see how this goes. Where did that INS guy come from anyway? But at least I can go to bed tonight knowing my Opa lied under oath. Sheesh.